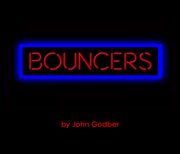 An outrageous and hilarious parody of the contemporary nightclub scene, four bouncers portraying over twenty different characters invite you to join them for a night on the town: giggly girls, lads on the pull, drunken customers and smooth DJs, all set against the tatty, glitzy glamour, flashing lights and pulsating beats of the dance floor.

Bouncers was first presented by Hull Truck Theatre Company at the Assembly Rooms, Edinburgh as part of the 1984 Edinburgh Festival Fringe.  It then transferred to the Donmar Warehouse, London in September 1984 and was nominated for ‘Comedy of the Year’ in the 1985 Olivier Awards. In the year 2000, The National Theatre voted Bouncers one of the top 100 most significant plays of the twentieth century. It remains one of the most often performed plays in the English language.

RSVP for Bouncers to add comments!