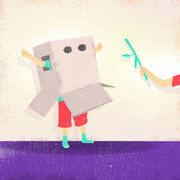 A theatrical adventure to delight 2 - 5 year olds (and their families) this Easter.

This charming play invites young audiences into the playful and gloriously imaginative world of two characters revelling in the games children play.

Boxy & Sticky is a brand new production from the team behind Out of the Blue and Luna and features mischief, music and an opportunity to join a play session after the performance.

Created and Directed by Sarah Argent