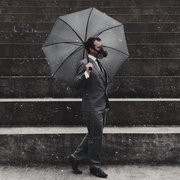 EVERYBODY LOSES: The Death Diary of Karl Patterson Schmidt is a performance of a death by snake bite. Phone signals are blocked, doors are locked, and while Doppelgangster's Dr Tom Payne is shooting up venom, nobody is leaving until he knows what it is to die.

Drawing on the true, self-documented death of world famous herpetologist Dr Karl Patterson Schmidt, historical accounts of the religious ritual of Snake Handling, and reptilian myths of genesis and the coming apocalypse, EVERYBODY LOSES interrogates societal obsessions with eternal youth, eternal life, and the destruction of our planet.

Combining 1950s scientific lectures, suicide notes, the old time showmanship and ritual of snake handling, and the warnings of that one scientist at the start of every disaster film ever, EVERYBODY LOSES is both a glorious spectacle and a grave work. Obliquely engaging with themes of climate change and the 6th great extinction it asks, with the unprecedented scientific documentation of the changing planet, and our failure to respond to the symptoms, is it too late to stop the poison?

EVERYBODY LOSES: THE DEATH DIARY OF KARL PATTERSON SCHMIDT is the fourth full-length performance work by Doppelgangster, and was first trialled as a 10 minute performance at Hot!Hot!Hot! Festival of Climate Arts in Melbourne in 2016.The work has been developed at MKA: Theatre of New Writing and a Footscray Community Arts Centre Container Residency, and at Aberystwyth Arts Centre (Wales).

RSVP for Everybody Loses to add comments!