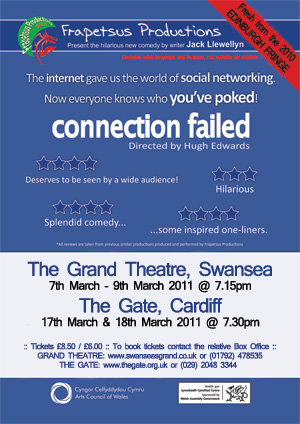 "...it was a real delight. The dialogue was brisk and very funny."
Tony Challis, Broadway Baby

After a successful run in at the Edinburgh Festival Fringe, Frapetsus are delighted to be bringing their social networking comedy home to Wales in March 2011.

The internet gave us the world of social networking. Whether your social vice be Facebook or Twitter, MySpace or Bebo, our lives are now played out to our invited guests. This new comedy focuses on the lives of young professionals in modern Wales as they attempt to survive the dating game and balance their private and personal life in full view of their 'friends'.

This fast paced drama takes the audience on a journey of discovery. The play's main focus is on relationships in modern Wales and how the way we live our lives has changed forever with the introduction of social networking. The play will look at the impact these sites have had on our lives and our relationships.

We follow the journies of six ambitious Welsh twenty-somethings, as they try to achieve balance in their lives. From speed dating to men hating, all will be revealed in a production packed full of humour. A play that will make you analyse the way many of us are living our lives today, and may make you think twice before pressing the send button!

Now everyone knows who you've poked!