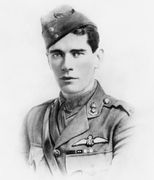 1917; six men from vastly different backgrounds - William ‘Billy’ Bishop from Canada, Edward ‘Mick’ Mannock from Ireland, James McCudden (Anglo-Irish), and Albert Ball, William Bond and Arthur Rhys-Davids (all English) - join the Royal Flying Corps to fight the Germans in the air. All full of brio, optimism and youthful courage, the play follows their progress via the memoirs and diaries that they keep, the letters they write home, and the response they get from their loved ones. The climax of the play is a battle between 56 sqdn and the lone German ace Werner Voss, who was universally admired by the men he fought. Very little is made-up; almost everything in the play happened as described and is based on their own recorded experiences and memories, often written down just after the events they describe while their aero-engines were still clinking as they cooled down.

'Going West' which will be performed at St Johns Church Cardiff, October, and the Museum of Army Flying Middle Wallop 8th to 11th November, with further performance opportunities around the ending of WW1 commemorations.

If you would like an audition pack then please visit www.everymantheatre.co.uk and book an audition with Jo Wakelin. jlwakelin@gmail.com.  Friday 4th (6 to 10), Saturday 5th 10 to 1, Wednesday 9th 530 to 730 Chapter Arts Centre.

Everyone who is cast will be asked to join a full day Frantic Assembly workshop on Saturday 19th May.