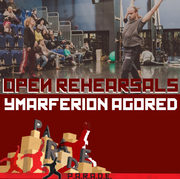 Want to know how we make dance? Wednesdays 6-7pm we open our rehearsal room doors to give you a glimpse of what happens behind the scenes.

Join Artistic Director Caroline Finn in the rehearsal room in this reimagining of Parade, originally performed a century ago in 1917. Revolutionary and scandalous, it was an artistic collaboration between choreographer Leonide Massine, writer Jean Cocteau, composer Erik Satie, and designer Pablo Picasso for the dance company Ballets Russes, and which laid the foundation for the surrealism movement.

P.A.R.A.D.E is part of the Russia ’17 season that marks the centenary of the Russian revolution with a range of events which capture the social and cultural explosion of the era and Wales’ historic connections with the Russia of the time