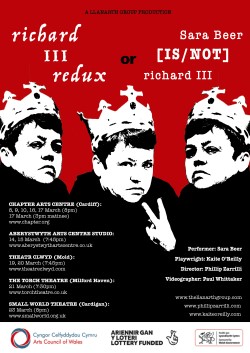 Richard III: Bogeyman. Villain. Evil incarnate. Or is he? What if he is she? What if the ‘hideous…. deformed, hobbling, hunchbacked cripple’ is portrayed by someone funny, female, feminist, and with the same form of scoliosis?  How might the story change, the body change, the acting change, the character change when explored by a disabled actress with deadly comic timing and a dislike for horses? How would previous star vehicle Richards measure up? Olivier, McKellan, Pacino, Sher – watch out – the mighty richard III redux has you in the frame.

Riotously inventive and joyously irreverent, richard III redux is not a production of Shakespeare’s classic, but an interweaving of stories about acting, difference, and a maligned historical figure told by unreliable narrator Sara Beer. She takes on Richard as a solo performer in a number of guises, interspersed with video and live camera sequences. The production will premiere at Cardiff’s Chapter Arts Centre on International Women’s Day, 8 March 2018.

richard III redux OR Sara Beer [IS/NOT] richard III is a Llanarth Group production and is kindly supported by Arts Council Wales. The production will tour to Cardiff, Aberystwyth, Mold, Cardigan and Milford Haven in spring 2018.