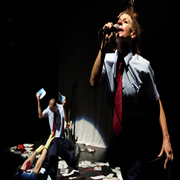 SMASH IT UP is part of The Summerhall Programme for The Edinburgh Festival Fringe 2015, 15 - 29 August

Smash It Up is an exhibition, a performance lecture, a dance theatre show with documentary and short film. Smash It Up has become a campaign, a series of public performances, a residency in waiting. Smash It Up is a destructive plea for some cultural conservationism… perhaps an ode to the misunderstood, underrated artist. It is a challenging and uncomfortable demand for equality, for hope and for greater creative freedom and beyond all for an understanding and nurturing of the creative imagination.

Mentored by Prof. Andre Stitt, with
choreography from Catherine Bennett and design by Becky Kemp-Davies.

"This thought provoking and culturally poignant piece showcased the
brilliance that are the Clarks" Hannah Goslin, Theatre Wales

RSVP for SMASH IT UP - Mr & Mrs Clark to add comments!