THE ACOUSTIC THEATRE – MUSICAL COMPOSITION OF THE SPACE: PART I & II - A LABORATORY WITH OSCAR EDELSTEIN, ARGENTINA 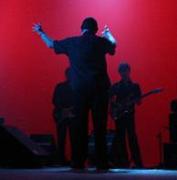 An exploration of perspective: a chance for artists, musicians, composers, choreographers, directors, and writers to consider the composition and perception of space as a component of their creative work, using examples from Edelstein's own works for orchestra and opera, along with his ideas for an architecture designed especially for musical works via “The Sonic Crystal Room.”

A forum in which participants can learn about and discuss the theory and practice of Acoustic Theatre - to think, to notate, to create – new tools, theories and techniques of the space in music, theatre and performance

The first two days rediscover questions, including the creation of the score, methods of notation, and the relation between the eyes and ears.

The following two days develop the themes more deeply and specifically in the direction of musical composition.

Composer, Oscar Edelstein displays and discusses his concepts of Acoustic Theatre. From the acoustic experiments of the Venetian masters to the 3D space of Stockhausen and passing through Schónberg, Ligetti & Nono, Edelstein will bring into play the imaginary, literary, and philosophical configurations in the generation of a sense of space.

I begin this seminar talking about the words I use to think - because there is a kind of prudence in the rational academic world to which I am not going to adhere – and the representation you make of your materials gives you new possibilities to do and create. Oscar Edelstein

Oscar Edelstein is a contemporary composer from Argentina. Known for creativity and inventiveness, he is frequently described as ‘leading Latin America’s avant-garde’. He is also a pianist, conductor, Senior Professor of Composition (Acoustic and Electro Acoustic), and Director of an award-winning research programme, “Teatro Acústico / Acoustic Theatre" at the University of Quilmes (Buenos Aires).

“Rhythmical - multilayered sound fields develop like waves. Edelstein’s close woven music, continuing the tradition of Varèse, has a force which goes under the skin with a great vitality.” Christian Fluri, Basellandschaftliche Zeitung

For further information on Oscar Edelstein go to: http://en.wikipedia.org/wiki/Oscar_Edelstein

One to one consultations on compositions can be arranged for Wednesday 18th July and Thursday 19th July.

The laboratory is a co-production with Clear Insight Productions.

RSVP for THE ACOUSTIC THEATRE – MUSICAL COMPOSITION OF THE SPACE: PART I & II - A LABORATORY WITH OSCAR EDELSTEIN, ARGENTINA to add comments!