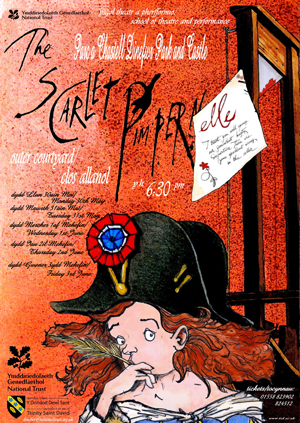 For one week only - he might, just might, - be found somewhere in the grounds of Newton House and Dinefwr Park. Starting on Bank Holiday Monday 30th May 2011, the School of Theatre and Performance bring a little bit of Revolutionary France to West Wales with their production of The Scarlet Pimpernel(le).

Very loosely based on the novels by Baroness D’Orczy, The Scarlet Pimpernel(le) is a comic adventure story for all the family.

Paris, 1792, and the horror of the French Revolution is in full swing.  There is hardly a moments respite for Madame Guillotine! Suzanne and her family have managed to escape to England, but in the process she’s had to leave, Armand, her childhood sweetheart back in Paris. And he’s in grave danger. For the moment he’s in hiding but the evil and dastardly Chauvelin, head of the Revolutionary police,  is hot on his trail and it can only be a question of time before a short trip on a tumbrel and then …… Thud! And Plop!.... Armand’s  head hits the basket. Only one person can save him….. the Scarlet Pimpernel(le). But who is this elusive Scarlet Pimpernel(le) and where can Suzanne find him…… or her!?

Come and join the Citizens of Dinefwr to find out what happens next. With a nod towards Allo, Allo and the Carry On films, its time to dust off your revolutionary fervour, put on your red beret and shout Vive La France!

RSVP for The Scarlet Pimpernel(le) to add comments!