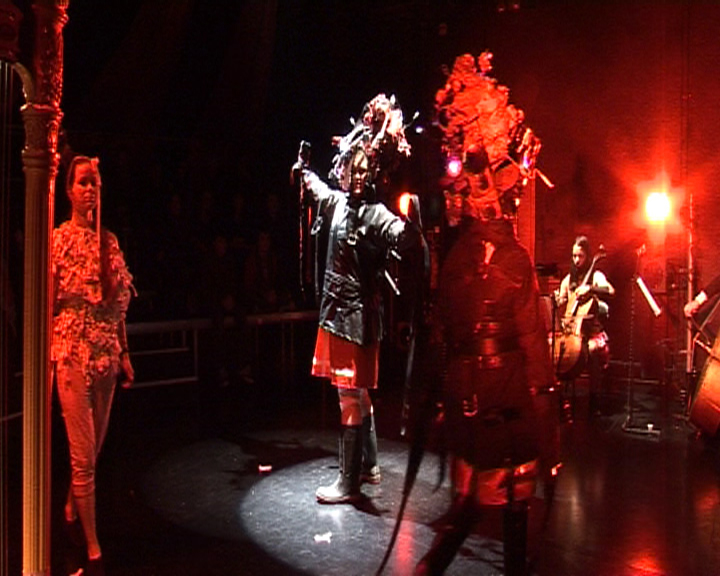 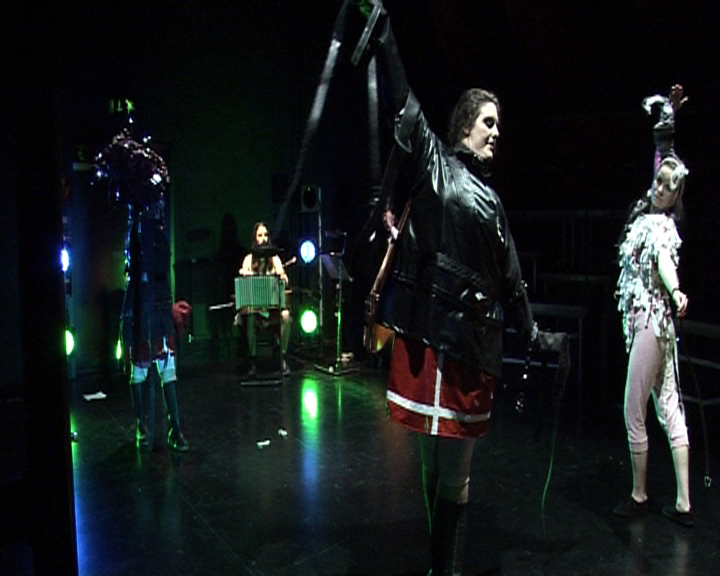 Feedback for 'Butcher' by Asking4It productions.

Performance seen in Chapter Arts Centre on the 9/12/11

I found 'Butcher' to be a unique experience in terms of its aesthetic presence and the bravery of the work which tackled an difficult and uncomfortable subject with no holds barred.

At the performance's core was what I perceived as a grotesque playfulness  which was echoed in the text, songs and costumes. As  a performance about doctors, hospitals and operations,the dark and painful topics  were brought to life through creation of a surreal world where adults played in a regressed childlike state not unlike an elaborate game of doctor's and nurses.

This production was tackling many taboos: death, cancer, mutilation, and also taboos of global dominance of health care by monopolizing pharmaceutical companies.

The use of foul language was at first overwhelming and seemed gratuitous or limiting to the work, but in thinking about it the use of foul language was integral to the work for its stance in fighting taboos. For me the swearing was a device to trick the taboo's, by using antisocial language associated with the subject it somehow devalues the taboo in question and in this performance made it vulnerable and less threatening. By ridiculing the fear it allowed the audience to question why the taboo is held in such high esteem in the first place and let them feel ok about challenging the way things are done. The songs and acoustic live musical score were also surprisingly on track to meet with the tough language and really brought the work to life as a macabre carnival.

The costumes and props were a great strength in the production and really brought in an interesting dynamic it terms of sculpture being re-interpreted into a theatrical context. The use of the sculptural object was also, for me, particularly relevant given the subject matter and the objectification of women's bodies in the script.

The all female cast gave it a feminist slant, which I wonder was of benefit to the work. I think the inclusion of male actors into the work could have added extra dynamics and power relations into the work which could have provided solutions of real menace and darkness.

There were also times when the message felt a little repeated, and I feel as the company develops with future work they will find ways to become more concise with editing the work. I'd also have liked to see more physicality in the work, and cleaner ways for the actors to change from one costume to another, as I think working with the forms of the body could work very well with the sculptural nature of the costumes and sets.

As first production I can only admire the effort, determination and detail that went into the work, I was excited and challenged by it and it still stays in my memory as something imaginative and unique, and I can't wait to see what the next work will be!

The production made me realise the exciting possibilities that theatre itself has as vehicle for questioning what society see as normal practice in the medial sector.

I think this was an innovative project in its use as theatre as space for challenging legislation and a belief system, and it's visceral nature felt like a far more effective way of raising debate  than say the conventional forms of a TV documentary, or news article.

Thought the concept of the production was a very brave and well-informed idea, which has certainly had an impact on the way I think and except cancer charities/treatments.

The performance was lively and very emotional at times, I think the intimacy we had with the performers and other audience members was very powerful as viewers could see reactions on lots of different levels.

I have always believed that life change (diet and exercise etc) can aid healing and prevent illness which is discussed in Butcher but I kind of just excepted that preventative surgery was the norm and had never really thought about the propaganda that surrounds these issues, it makes complete sense especially with regards to monetary gain for pharmaceutical manufacturers.

I do think some individuals would find this very difficult to except, as we all like to believe that the caring profession has our well being at the forefront.

The use of the orchestra in the space was great it all felt very inclusive and alive.

I loved the headpieces; they really did help the cast interact with audience and also physically elevate their position in relation to the patient.

There was obviously a great deal of blood sweat and tears that’s gone into this production, it is good to see performances that focus on women and empowering women with knowledge and honesty.

I look forward to the next project!

Still almost a taboo subject, the uncomfortable notion of mastectomy, other bodily severances and addition of appendages made this a thought provoking, visually exciting production.

The close proximity of the actresses and musicians, the stage-set, sculptural props and lighting all combined to create a ‘moving’ installation.

The music cemented the dialogue and played on the ‘nausea of music hall’. Moments of humor gave welcome relief.

Following this debut I wonder what Asking4It Productions will do next?

A performance with a strong text/ subject medical-social that attempts to elucidate aspects and issues that anticipates cancer prognostics in health and to sell medical operations (commercial operations?) to women.

Butcher explores the extirpation of organs from the female body as a popular belief that a cure exists before the malady.

The business hidden within all the medical procedures and diagnostics as money machine and maintain the female body as main victim and source of profits in the medical market.

Despite sometimes being slightly pamphleteered it is compensated by the funny ambiance, like a dark comedy.

With the actors playing as performers carrying on drama and visual theatre, the nonsense is intensely juxtaposed with the reality of surgery department in most of the hospitals in our time.

Shame that the musicians were not interactive most of the time with the actors and with the whole process. Watching them waiting to play was a bit disappointing.

I think Jane Fox and Susan Jickells were extremely brave and also the troupe showing a sad, confusing and surreal reality where women are victim but also any human being that trusts any kind of uncertain ideology.

The show reveals through a “musical happening” that medical ideology transforms human beings into merchandise or pure flesh.

A pure flesh for cannibals 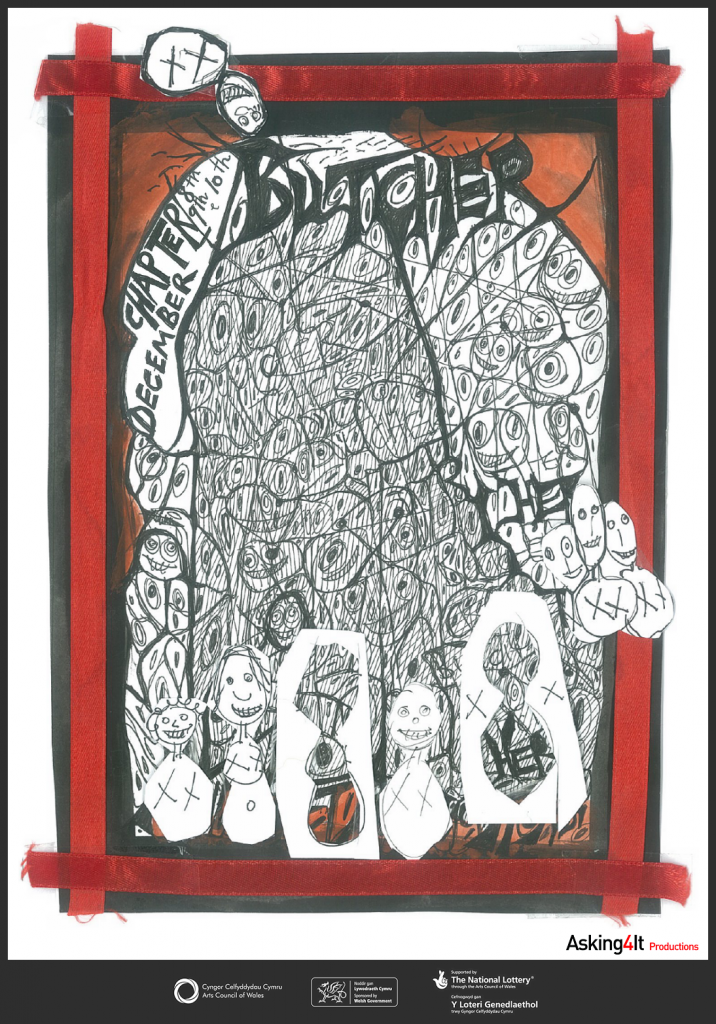 We are taught that prevention is better than the cure; common sense tells us that, to a large extent, this is true. Avoid alcohol and chances are you’ll live a longer

life. Stock up on vitamins and you’ll ultimately spend less time at the chemist’s. But when prevention moves far away from an apple a day, can we ever be said to take this rule too far? Indeed, as preventative measures develop from simple actions to a deliberate mutilation of the body, ‘a stitch in time’ certainly develops a horrifying second meaning.

In Butcher, new company Asking4It Productions explore why more and more women are turning to mastectomy to up their odds in the battle against cancer. Focusing on individuals who have had a history of breast cancer within their family, Butcher interrogates the sensibilities behind these measures, and tests the treatment for its macabre, theatrical potential.

The production’s script was sketched out by writers Susan Jickells and Jane Fox, but ideas of discussion and debate have been key in fuelling and ornamenting this devised piece of musical theatre, with the company holding two discussion groups in October and November. Following this dynamic research, we are promised a “visually stunning, hilarious experience”, which borrows as much from the circus as from the laboratory and is set to be a cutting exploration of the intrinsic horror of preventative surgery. Tickets: £8-£12. Info: 029 2030 4400 / www.chapter.org (AF)

Come and join us for some irreverent pre-crimbo mayhem in our circus. Seating numbers are limited as theatre-in-the-round so book early and avoid disappointment

Welcome to the circus. A comedic and surreal exploration of genetic determinism with singing, an original score and live band.

Is there such a thing as a cancer gene and what exactly are the implications for women choosing to have healthy breasts and other organs surgically removed?

Is biomedical science (from genetics to pharmaceuticals to surgery) greedy, fatalistic and, ultimately, nihilistic?

How does optimism, faith and fear impact on our thoughts and choices, and how does it influence the health of our genes and impact on all us?

Directed and Produced by: Jane Fox

Suitable for over 16s 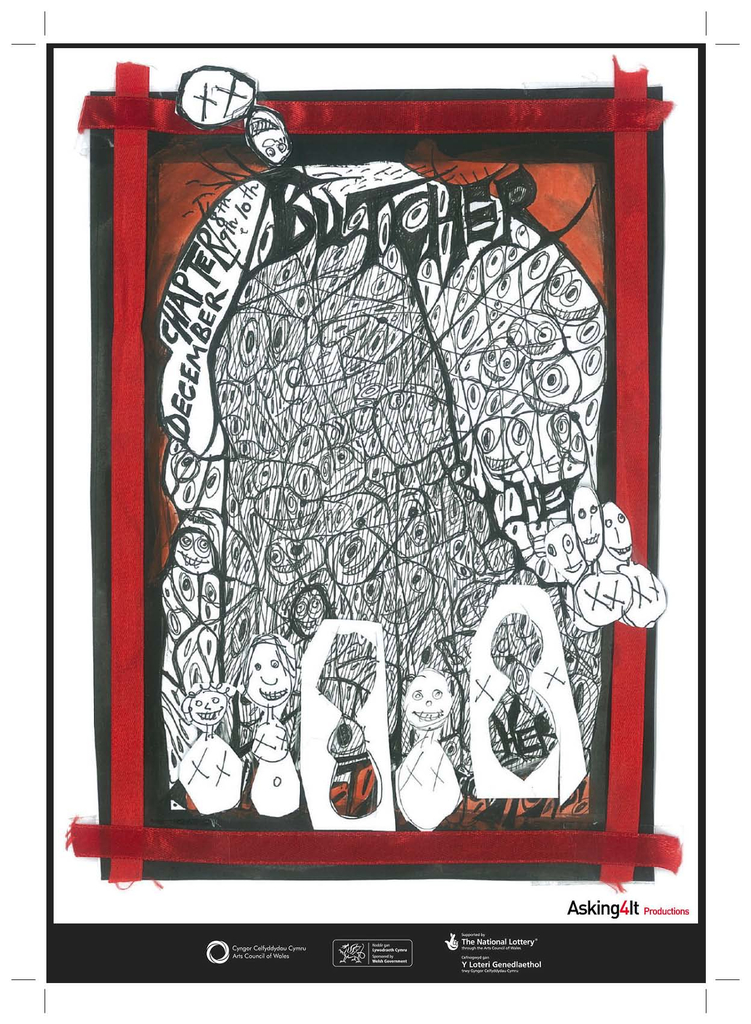 1) What is genetic determinism and the implications for getting it wrong?

With our debut production Butcher at Chapter in December, Asking4It Productions would like to invite members of the public, all related professions and otherwise to a discussion on the topic of Genetic Determinism and the implications. We are researching the contentious and sensitive area of the 'Cancer Gene'.

We are specifically interested in the growing trend of women choosing to surgically remove healthy breasts and other organs. These major decisions are impacting on many women, families and societies.

There are other voices and scientists like Bruce Lipton former professor of genetics at Harvard University and Mae Wan Ho Director of The Institute for Science in Society (ISIS) London who are marginalized for challenging the dominant positions held by contemporary biomedical science, research and treatment pathways.

All are welcome and we are keen to listen to all perspectives and opinions. This explorative process will inform the development of Butcher.

Both groups will be held in the dance studio (upstairs)