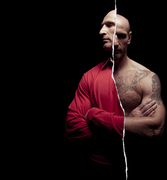 Click here for tour dates across Wales and England

“I was doing something nobody had done before, and if you’re the first to do something, you have to be prepared to take the sh*t for it.”

On the eve of one of the most important games of his career, Welsh rugby legend Gareth Thomas received a warning: The Sun newspaper was going to "out" him as gay.

This is the story of two Welsh names bruised, but not beaten, by media speculation; Gareth “Alfie” Thomas, 100 caps for Wales, once its captain, now the world’s most prominent gay sportsman; and his hometown, Bridgend.

Working with Alfie himself, and young people in Bridgend, two of the UK’s most exciting theatre companies - National Theatre Wales and Out of Joint - have teamed up to tell a great Welsh story about sport, politics, secrets, life and learning to be yourself.

I don't think anyone with different sexual preferences should be victimised.  Provided it takes place among consenting adults.  Children and young people must be protected by law against sexual…Continue

You need to be a member of Crouch, Touch, Pause, Engage to add comments!

Untitled 2a - A Callout

I wonder if people would be interested to read my blog. Its not directly linked to Crouch, Touch, Pause, Engage but has a similar theme that I am looking for support.

Excited to see the final draft that makes it to stage> It was a tough time being part of 'that dark place' Bridgend found itself under the worlds media glare. Have been very fortunate to have been a part of this process. From having a chance meeting with Max Stafford Clarke to assisting Max and Robin to source the stories, witnessing the emotional workshops to now seeing it get to stage. I hope people find this a refreshing and above all an authentic and honest piece of work.

Thanks for sharing that Tracy!

For those of you in the group interested in being involved in the developing arts scene in Bridgend, please read here for some fantastic opportunities for artists to present work in the town's newest arts & culture hub: Carnegie House, in 2015: http://community.nationaltheatrewales.org/profiles/blogs/fantastic-...   Thanks, Tracy