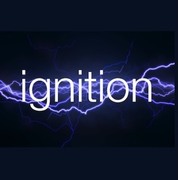 Ignition Theatre is based in Wales and looks to encourage the transition of new writing from script to stage, producing plays that have both high artistic integrity and popular appeal.   Its first production 'Call Me Dusty' got great critical acclaim and excellent audiences.  This was followed up with a play about the children's author Edith Nesbit, 'The Railway Children Lady'. again gaining excellent reviews.  In June 2018 Ignition Theatre is touring a new adaptation of the HG Wells' classic novel ''The Invisible Man', to ten theatres.

The thought of invisibility – and the advantages it could bring to someone – is one which has captured the imagination of millions since the classic HG Wells’ story The Invisible Man was first published.

In this fast-paced, hilarious new adaptation, all the parts are played by just three actors, from railway porter, to vicar, to landlady, to tramp, to mariner, to doctor, to policemen, to a whole baying crowd of people, to The Invisible Man himself.  It adds up to 90 minutes of pure fun – and makes the The Invisible Man a ‘must-see’!

You need to be a member of Ignition Theatre to add comments!