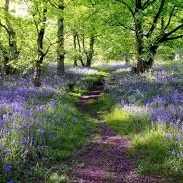 What I do:
I enjoy writing poetryand being imaginative.My other passion is designing dresses.

A little more about me:
I am keenly interested in the Arts and would like to see every community in Wales show their artistic side and be original in their work.

Projects I’m working on:
I am collecting recordings of peoples' memories of the Rhondda Valleys over the past fifty years.

Poetry has always allowed me to explore different moods, seeing events from varied perspectives. The following poem I wrote," Homecoming"   is a sort of awakening after losing someone. Can memories be imperfect when one believes one knows only a basic truth?

His eyes burnt with the tears of Isis

As he stared, willing against hope that

The ruined farmhouse would rise from the ruins.

The sweetness of her laughter came again.

He turned around and she remained silent.

Festering guilt had urged his homecoming;

If she had asked him, he would tell her why.

He shouted at the tramp who lived amongst the stones if

He had heard of his Lady.

The tramp cackled, his open mouth festered with sores,

Asking what he would pay to understand about the red-haired Lady.

The man closed his eyes, raging, when the whispers

Became the truth he had forgotten.

Running toward the cliff, he saw the vervain would not heal his anguish.

It was foolish to return now.

Thinking of the shadows that were,

Her pity tore at his heart as she never forgave.

Now all he saw were weary ghosts that

Would be cremated with the fire of his death.