I arrived at the car behind the Parry Williams building in Aberstwyth ready to leave for the first show. I was clutching my carefully crafted Glen Gould style Blackwood soundscape CD, created using almost every single one of the last 48 hours of my life, only to be told that "we probably don't want to be listening to that". It wasn't phrased quite so politely. I saw the last two days flash before my eyes and managed to stifle several primal urges. Crying out of context… Continue

Iron in the Soul - The Ultimate Disaster Movie on Stage.

Dance/music/multimedia project looking for a venue. Forge, foundry or cooling tower preferred. Suitable for all post-industrial areas.
Suitable for radical adaptation to suit company culture.
Adaptable for educational performances.
Check it out.

Iron in the Soul

As one of the critics for National Theatre Wales, one of my duties is to thrust a load of reviews in your general direction and invite feedback. I hope that they're not torn apart too enthusiastically, in much the same way, I imagine, that others hope I don't slag off a play they've just spent months perfecting.

So here's a quick round-up:

A Kind Of Alaska had its first night at Chapter last night. I liked it… Continue

Good luck with the opening. As a good valleys' boy myself I shall attend the performance with my entourage on Friday 26th March in Aberdare. Ten quid a ticket though! It says from £5 on the publicity! Bloody hell! Also, I'm duty bound to report that the 'cut-up' style of editing you used on the promo film for 'Good Night Out' is strangely familiar...

Finally... a friend of mine auditioned for this show and never heard back, so as a little tribute to him…

Who said that accountancy was boring? Not at NTW.

As it’s a day of firsts for National Theatre Wales – the first night of the first show of our first year! – I thought I’d join in and write my first blog.

I’m currently alone in the office as everyone else is at Blackwood watching the dress rehearsal. I’m not there because I’ve got a ticket for…

You know that thing you do with good luck cards?...when you open them to vast acres of blankness..and the card invites you write something brilliant... and you cant ..and you think..blimey i spent £3.50 on this card and i cant think of a thing to say...well that happened to me.....Its not that i havent got things to say....i did have but its just the ability to say it in a few words that escapes me..you know the witty erudite phrase that sums up six weeks of work...that sums up the bond you…

Five people including me. Six chairs, three laptops, two white pillow cases hung on the back of the radiator. One table covered with the remains of many dinners and breakfasts. NATIONAL THEATRE WALES in neon lights behind Dai Smith the chairman of the Arts Council of Wales. The BBC arrive and are beginning to set up lights for an interview with Will Gompertz the new BBC arts editor. The two men are engrossed in a discussion in… Continue

My new play 'Tittle Tattle, Tattletale' is being read at Live Theatre tonight as part of the Different Stages Festival. All very exciting ...

The Bacon and egg roll, served with a mug of tea on a saucer, is to be honest, quite brilliant. I seem to have arrived at the cafe during mid morning workmans breakfast. A large group of men in grubby work clothes have just entered and ordered a combination of breakfast and sausage and chips. I am eating at a modern school table next to a gas fire taped to the wall… Continue

The girl opposite is projecting tinny music from beneath a mop of auburn hair. She wears a red autumnal scarf around her neck and an inspector gadget jacket with large black buttons. Her head is facing down towards the device playing the music. I am trying to decipher. It is a female artist, someone like Alanis Morrisette of similar. She is travelling on a return to Cardiff from... I can't remember where she boarded the train. The man with the laboured breathing exits. Possibly we are… Continue

The train, which had been overflowing with school children chattering about drugs and their boyfriends, returns to a state of peace and quiet. All but for the gentle rumble of the train and the laboured breathing of a rather sturdy looking gentleman to my left. A red brick and a green metal structure filled in with green wooden panels, their paint worn away, fades… Continue

I did sleep. The inflatable travel cushion came in handy. As I exited the train at Shrewsbury I passed an old man carrying a number plate. I saw him again a few minutes later in the coffee shop where he directed me to the much needed sugar. Pigeons are flocking about the bridge as we pull away from the station. I am not in my seat No. 20 F as the Man in 21 F is so fast asleep it seems unfair to wake him. Especially as the train is… Continue

I should probably try and sleep. It is 5:15am and I am on the Arriva Trains Wales service bound for Birmingham New Street. I will get off before that. Shrewsbury, change for Cardiff. Then Ystrad Mynach and finally a bus to Blackwood. I should get in some time around 10:30am. As the train travels between Aberystswyth and Borth all that can be seen through the window… Continue

The sudden panic in question relates directly to the task that I have set myself for day 10. I have booked myself onto the 5:14am train from Aberystwyth tomorrow morning. I should arrive in Blackwood some time after 10:00am. I will then spend the day meeting people connected to the NTW and observing rehearsals before jumping back on the train and arriving back in… Continue

I meet with Alan Chamberlain in the tree house in the afternoon. The morning is spent in the National library working through emails and missing the delivery of my new computer. Still no sign of the laptop, so I call apple repairs in London and am told that it is on the way. One or two pieces of equipment would make life a great deal easier.… Continue

Look at this opportunity to get into the Theatre Sandbox! 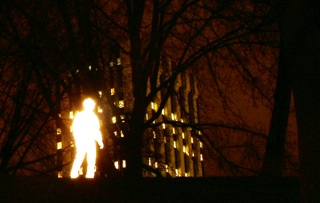 I wake up early and take my daughter swimming at the local pool. I spend most of my time under water, it is other worldly. She spends most of her time attached to my back like a horse rider. I'm not sure she appreciates my own very real need to breathe.

I arrange to meet Alan tomorrow at 12:30 to discuss the project. I also learn how to publish my blog to Facebook and the NTW community simultaneously. This results in almost instant feedback from… Continue

One of my favourite details in Alan Harris's play, A Good Night Out in the Valleys (Go as You Please), which opens for preview on Thursday, is that everyone and everything 'doubles up'. The idea came about in two ways. When we were running a workshop in Ammanford Miners Institute (with the fabulous Mess Up the Mess youth theatre) as part of the research for the show, we noticed that a lot of the local shops seemed to be doing a 'two in one' kind of business - the first one we noticed was… Continue

It's Saturday and despite not getting to bed until 3:30 in the morning I still wake up before 9. The problem with being busy is that immediately on waking a thousand thoughts enter your head and as a consequence going back to sleep isn't really an option. The first week of the project is almost over and I feel pleased with the progress that I have made. Despite much aimless wandering on Monday and Tuesday I soon found direction and the interview with Mike Pearson on Thursday along with a… Continue

45th Anniversary of Pinter's The Homecoming

It's short, but it's a nice little insight into a very important moment in Wales's theatrical past.