It has been a week since 'Parallel Lines' finished and I'm pleased to say the audience response has been amazing, for example:

"I’m still buzzing with the exhilaration of seeing Parallel Lines last night at the Ffyrnes, Llanelli.  The script was powerful and relevant, and the staging was simple but so effective in its focussed austerity.  Best of all, it featured four highly-talented actors all of whom gave brilliant performances.  Thank… 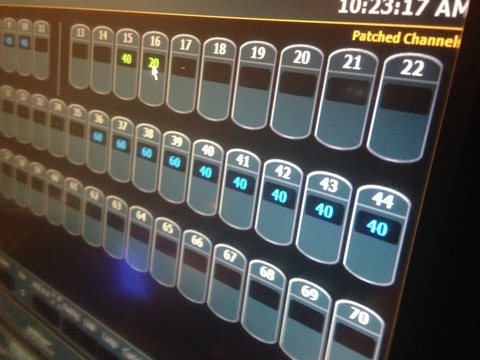 Very excited to be at Chapter today for the tech rehearsal of Dirty Protest's 'Parallel Lines'. Having seen the 2012 production here at Chapter the initial and most noticeable difference for audience members is going to be the set. From the 2012 naturalistic kitchen where we saw Melissa's unmatching and disorganised flat compared to Simon's neat and organised kitchen the set…

Parallel Lines: Day before the tech

With the tech team in the theatre rigging the lights and building the set the cast are running lines and blocking with Director, Catherine, and Stage Manager, Emily. This is the final opportunity before we tech in the theatre to confirm which word they stand on or which angle the chair should be placed at. The cast are in good spirits with the ability to have fun with the lines now which Gareth (playing Simon) informs me is a great position to be in as no- one will be thrown during a show if…

Parallel Lines 2 days before the tech

This morning we added Simon and Julia into the finalised version of the physicalized hair cutting scene. The tension was incredible. The music is fantastic. The performances are captivating. This is not a show to be missed! It will have you on the edge of your seat. There is so much to see you should see it more than once!

Following on from the hair cutting scene Julia and Simon are struggling with the repercussions and hoping that time will help to heal their relationships.  Cast are…

Parallel Lines 1 week before the tech

This morning started with a half hour compulsory warm up for cast prior to rehearsal start at 10am. I arrived as a plank competition had begun between Sara and Gareth. Pleased to report a win for the girls with 3 minutes 40! Then a quick partner game I picked up at National Theatre Connections Director’s weekend last weekend. Parallel Lines is a play with two pairs (husband and wife, mother and daughter) so these concentration warm up games for twos were really effective.…

Great to be back with the team today after my weekend in London doing the National Theatre Connections 500 course. I am absolutely loving the final script- the additions and alterations made last week have transformed this script from a great piece of writing into a truly exciting and breath taking script. I have attached a couple of photos from the first couple of read throughs with free movement- the only rule that was added was to not use the chairs as chairs... I can't wait to work…

My first thought about attending NTW TEAM Critical Chinwag was how lovely it was to meet and chat to not only other NTW TEAM members but theatre community members I have lost touch. Also in attendance were some of the Dirty Protest Parallel Lines team. It is nice to see so many familiar faces supporting Chapter and the arts in Wales and especially the Dirty Protest lot. I was surprised to see Jonathan Dunn's name on the Thank you list as it appears this local film maker and cameraman/… 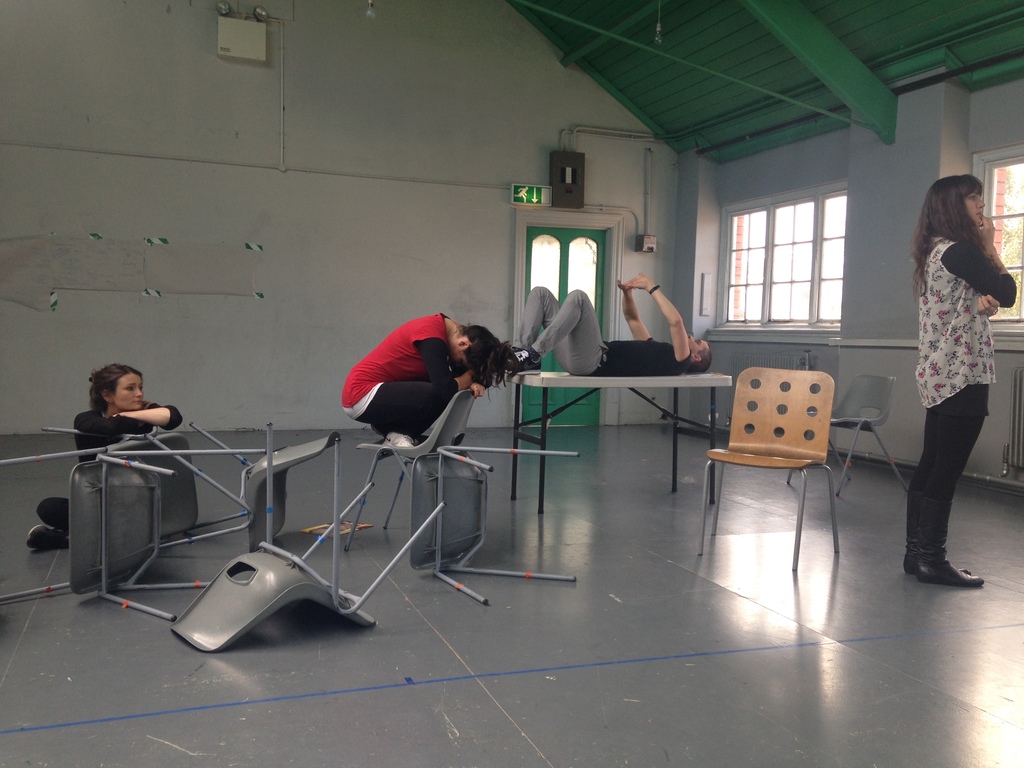 Jan lead a fantastic physical (dance) warm up this morning to get the team moving and grooving before some concentration games which included a game I was previously taught by Becky Poole (Above Board Fitness) which she calls Space Invaders and involves making eye contact and releasing people by saying their name… I was completely embarrassed by accidentally referring to each actor by character name which had been firmly embedded in my brain from the two read throughs on day 1! A fun start…

Feeling like the first day of school, director Catherine Paskell (who I met at the interview) is an absolute dream at putting me at ease. The team is larger than I thought (Director, Producer, 4 cast members, Production manager, Writer, Designer, Lighting Designer, Sound Designer, Design assistant, Marketing Manager, Audio Describer and Chapter staff) but all incredibly welcoming. After a quick introduction of names/ roles we have an introduction from Catherine on Dirty Protest’s ambition to…

Parallel Lines Day 2: Cup of tea with NTW TEAM- What is TEAM?

If you are reading this then I am likely speaking to the converted about the benefits of joining NTW TEAM on the NTW Community, but just in case you didn't know here are a few key points about the opportunities available through TEAM!

Another fantastic opportunity available to NTW TEAM members! Free tickets for "The Drowned Girl" tonight at Chapter with an opportunity to meet and have a chinwag about the production! Another great way to easily get involved with NTW Team and theatre making in Wales! …

Fabulous cuppa with NTWTEAM Assistant Laura today... even though I am always on NTW Community and checking out current posts I have never appreciated just how easy it is to connect with TEAM and access the opportunities and events so expect a few more posts from me so I can tell you all about the things coming up- I am already excited to attend the next TEAM Workout and Skill Swap and encourage anyone even with the vaguest hint of an idea or those who wish to network to check out the info…

Plays in the Bag writer workshop with Dirty Protest

This fabulous opportunity for budding/emerging writers is not to be missed! As the Dirty Protest tour of 'Parallel Lines' gets underway they are keen to support new work and writers along the way by collaborating with established and wannabe writers in these bilingual and FREE workshops where you have the opportunity to write a new play (developing skills and picking up tips on the way) and see it performed that…

Looking forward to starting work on Parallel Lines tomorrow with Dirty Protest following the rehearsal schedule and production meeting notes from today! So grateful to NTW Team for the opportunity to assist on this production and can't wait for the meet and greet, model box showing and script read through tomorrow. Having seen the original production in 2013 I am excited to hear how the project has and will develop including the company's first national tour! I am sure it will be a… 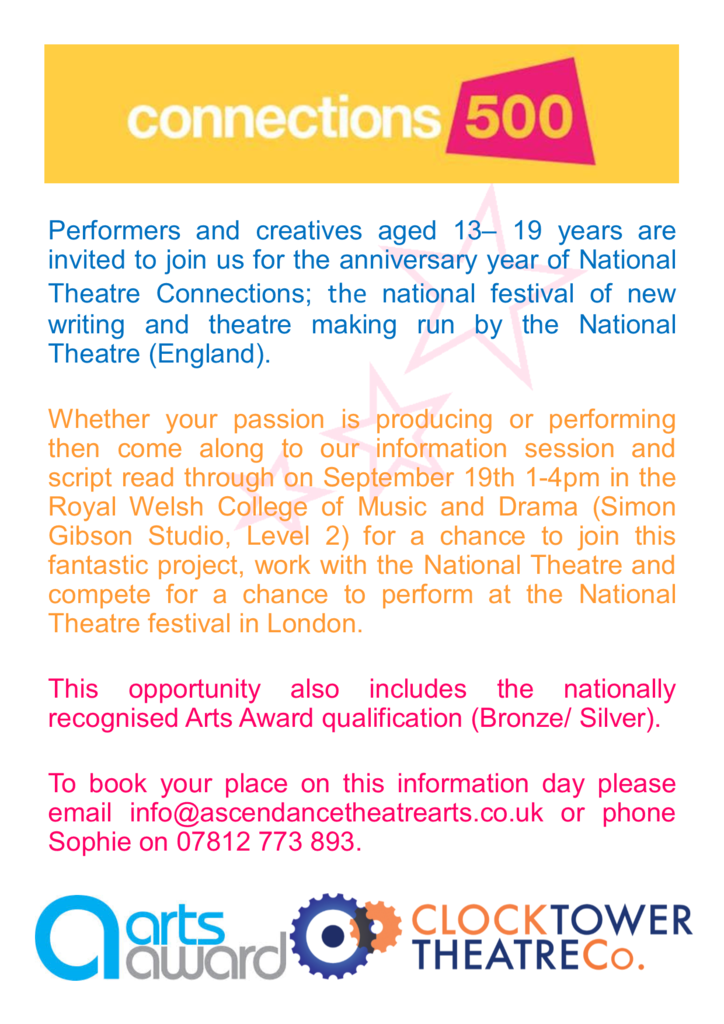 Does anyone have any experience of handheld projectors?

We are doing a performance in March as part of our National Theatre connections involvement and we will be projecting images onto the performers bodies and items of set. If anyone has any advice, experience or could loan us handheld projectors for the week it would be greatly appreciated? We can offer comp tickets and advertising in exchange x

Arts Awards inspire young people to be creative and grow their arts and leadership talents. I am a freelance Arts Award advisor who can work with your organisation, school and young people to complete their Bronze or Silver award.

For more information on the Arts Award please visit www.artsaward.org.uk

Please do not hesitate to email me for more information: ascendancetheatrearts@gmail.com

Oliver! is an amateur production this week at the RWCMD in the wonderful Richard Burton Theatre. Everyone working on the production is volunteering their skills to support the incredibly talented adult and child cast in the well- loved family favourite that is Oliver so I am incredibly sorry that we cannot offer payment of any kind but complimentary tickets may be available. If you could spare a few hours then we would be incredibly grateful! Our bassoon, oboe and double bass players…