A great opportunity for anyone wanting to work in arts and education in Central South Wales. We need a freelancer (you'll need to have other clients) to work on producing communications content. All the information you need is here, on our website.

Just spotted this and I thought it would be good to share here: Architect Rob Firman, who worked on the Millenium centre in Cardiff has travelled around Wales exploring all the theatres and performance buildings in Wales.

Expecting to to find around 30, he eventually documented 111 still standing, and another 46 which had been demolished!!

This community featured in the Guardian

Hello folks. I penned an article for the Guardian - The next step to social networking is building your own online community: Guardian Culture Professionals Network - it's about this online community and how it has helped to develop National Theatre Wales as a company - please take a look. They don't have comments enabled but you can always respond to…

Bradley Manning goes on trial tomorrow accused of the biggest leak of classified information in US military history. The next day is his birthday. Just as we start work on The Radicalisation of Bradley Manning - NTW18, the shape of the case against him and his defence will get…

Hi all. I'd like to share some work I've been doing on an Alternative Reality Game which a group of Welsh based creatives are taking to the Storyworld Conference in San Francisco at the end of October.

The conference is a meeting point for industry peeps from films, TV and interactive media and we are creating a ghost story which will play…

Places available at social media training that is run in Cardiff and Caernarfon next week by our company NativeHQ, which often works with NTW.

Full details of the…

Director John McGrath talks about Love Steals Us from Loneliness

Set design for Love Steals Us from Loneliness

One Minute with... Nick Allsop, Head of Production and Operations

Nick is in charge of transforming Hobo's rock club in Bridgend into the setting for Love Steals Us from Lonelines. I caught up with him for a minute to tell us what he's doing on the… Continue

Another in the "one minute with" series... this time with Sarah Thomas, who is the Deputy Stage Manager on Love Steals Us from Loneliness. You can see all the "One Minute With" series by running a search for the tag "oneminutewith".… Continue

I managed to grab a minute with Elise Davison, who is Assistant Director/Emerging Director on Love Steals Us from Loneliness. Elise is writing and videoing about the rehearsal process as it goes - just take a look at Elise's blog… Continue

Our Bridgend - for the people of Bridgend to show what they really feel about the town.

We have developed an exciting new website as part of our work around Love Steals Us from Loneliness, the seventh of National Theatre Wales' new play, which opens in Hobo's Rock Club in Bridgend on the 7th October. The site can be found at ourbridgend.com 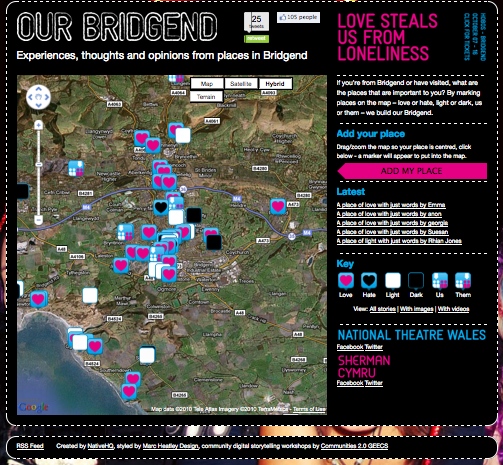 Our Bridgend is based on Google Maps, and enables…


I popped into visit the rehearsals for Love Steals Us from Loneliness today, and was lucky to find playwright Gary Owen was visiting the cast and working with Director John McGrath. I took a few photos, and managed to steal a few minutes of his time for him to say a few things about the play, and about Bridgend, where it's… Continue

Had a really interesting session with the TEAM in Cardiff this evening - we spent a bit of time going through what NTW is doing online and how they can help spread info and links about Devil Inside Him to their networks. We had a brainstorm about how they could create a buzz around the show, and came up with ideas around live performances, audio and video resources they can create. Devinda has made a Group for TEAM Cardiff… Continue

To mark the start of Shelf Life, I thought you might enjoy this video about how the task of the librarian - managing information - is being transformed by the web.… Continue

Some of you may have noticed a recent spate of spam blog posts here on the community site. This is a common problem with open social networks, as anyone can join, and spammers are looking for cheap link hits for their products from high value websites.

We are dealing with it by instantly suspending the members when they join/post, deleting their content and reporting them as spammers to Ning, who run the software that powers this website.

The time it takes us to delete a… Continue

Excerpts from "The Devil Inside Him" on the Times website

Shall we change the site font? Your views please.

Several people have mentioned to us that they find the font on this site rather difficult to read, so we have decided to offer some alternatives, and ask for your views.

We've come up with two alternatives - ARIAL, the second VERDANA. There is an image of what the site would look like with each of these fonts below.

Please let us know if you would like us to change the font or keep the existing one, and if so, which one - VOTE… Continue

Talking about National Theatre Wales on the web

Hey everyone - some news. We've set up some systems that will monitor any content on the web relating to National Theatre Wales and its productions. It starts with NTW's monitoring webpage on Netvibes which will give you links to any mention of the company in the news, on blogs, Twitter and blog posts here on the community site, as well as videos on YouTube and photos on Flickr.