We are looking for new members to join our TEAM Panel from January 2019.

TEAM is NTW’s unique approach to engagement. It is an international network of friends of NTW who support each other and feed into all aspects of our work. TEAM is a pioneering organisational model that creates a different relationship between an arts organisation and the people with whom it…

Birth of Blackfulla Performance Alliance 2015 from Australia Council for the Arts on Vimeo.


Gavin Porter and I were lucky enough to be invited to attend the National Indigenous Theatre Forum in Brisbane recently. This three day Forum saw over 70 Indigenous… Continue

We were lucky enough to have Polarbear spend three days with us a few weeks ago. He worked with eight young artists from across Wales, and here's some of his thoughts on the experience.… 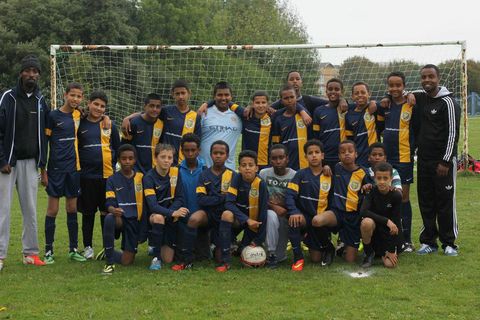 Coached by Ali Goolyad and Ahmed Hassan and sponsored by NTW, Tiger Bay Under 14's are currently sitting sixth (with a…

On Saturday 4 and Sunday 5 October NTW TEAM will be supporting community group Positively Ponty with their Fun Palace. Fun Palaces are a celebration of Joan Littlewood’s centenary and her vision shared with architect Cedric Price. Joan Littlewood was an incredible woman - you read more about her here, with Cedric she conceived the Fun Palace as a welcoming place where arts, sciences, education and entertainment were all… Continue

Facilitators Required to Assist with our TEAM Evaluation (Paid Opportunity)

Over the next two years or so we'll be evaluating our TEAM programme and we are looking for 10 TEAM members to work alongside our professional evaluator Gerri Moriarty (www.gerrimoriarty.com) to help us do this.

You don't have to have any specific experience as we'll train you, but this opportunity would suit TEAM members who enjoy…

We have a great opportunity for a TEAM member to join the production team on our forthcoming show The Gathering/Yr Helfa.

A powerful exploration of the annual cycle of sheep-farming, The Gathering/Yr Helfa is the culmination of three years' observation of life at Hafod Y Llan, a working hill farm on Snowdon.…

An NTW Approach to Education?

On our travels we’ve often worked closely with schools and colleges, from Danielle’s gang in Tonypandemonium to the pre-show for Love Steals Us From Loneliness. They’ve also provided performers for a number of our Assemblies and TEAM projects, and helped our Communications team come up with new marketing ideas. Up until now, it’s generally been part of a wider project, but we now want the focus to be solely on education.

So we've decided to seek the help of…

Step Change is a national programme for professionals seeking to progress/develop their careers in the performing arts. Providing coaching, mentoring, masterclasses and experience-based learning, Step Change supports those in need of a change of direction.

Focusing predominantly on producing and management roles, Step Change expands the range of opportunities for those hoping to make a transition into or within the arts, especially those who are overlooked and underrepresented. In its…

For the past year our TEAM Panel has worked with the NTW staff team to guide and advise us on all aspects of the TEAM programme. They've helped create one of the most exciting models of engagement in the UK, but also contribute to all branches of NTW from programming to recruitment. They sit on our interview panels, represent us at shows, give presentations on our behalf and feedback regularly to our staff and board.

We are now looking for new members with a range of skills,…

Be Part of Praxis Makes Perfect

We are looking for people to be part of our next show Praxis Makes Perfect. It could involve you being a Russian soldier, running a political stall or being taught a song by Gruff Rhys! You'll also get to work on a show which involves director Wils Wilson, playwright Tim Price and Gruff Rhys & Boom Bip of Neon Neon.

In February TEAM members from across Wales came together to tell us what TEAM means to them and their vision of what it, and National…

The first prize is £5,000, with £500 for second place, £250 for third plus five runners up will receive £50 each. The competition is accessible to all; it doesn’t matter if you are an established poet or just dabble with verse now and then. All entries to the competition will be judged anonymously, so this is a great opportunity to have your poetry judged on its own merits.

The 4th Urban Dialogues Exhibition is Looking for Submissions

The 4th Urban Dialogues exhibition at the Red Gallery, Shoreditch, London, 20th November – 1st December 2012, explores faith and belief in the UK today by bringing together work by contemporary artists from a broad range of backgrounds and perspectives.

They are looking for submissions from artists, either visual or performance…

National Theatre Wales are looking for up to 10 individuals who will work with us to expand, improve and guide our TEAM programme.

Our TEAM panel will feed into the overall development of NTW advising on issues such as recruitment, programming, marketing and training. Building on our achievements over the past couple of years, it will place TEAM firmly at the centre of NTW,

Members will be our representatives at events and performances, and will attend meetings and give… 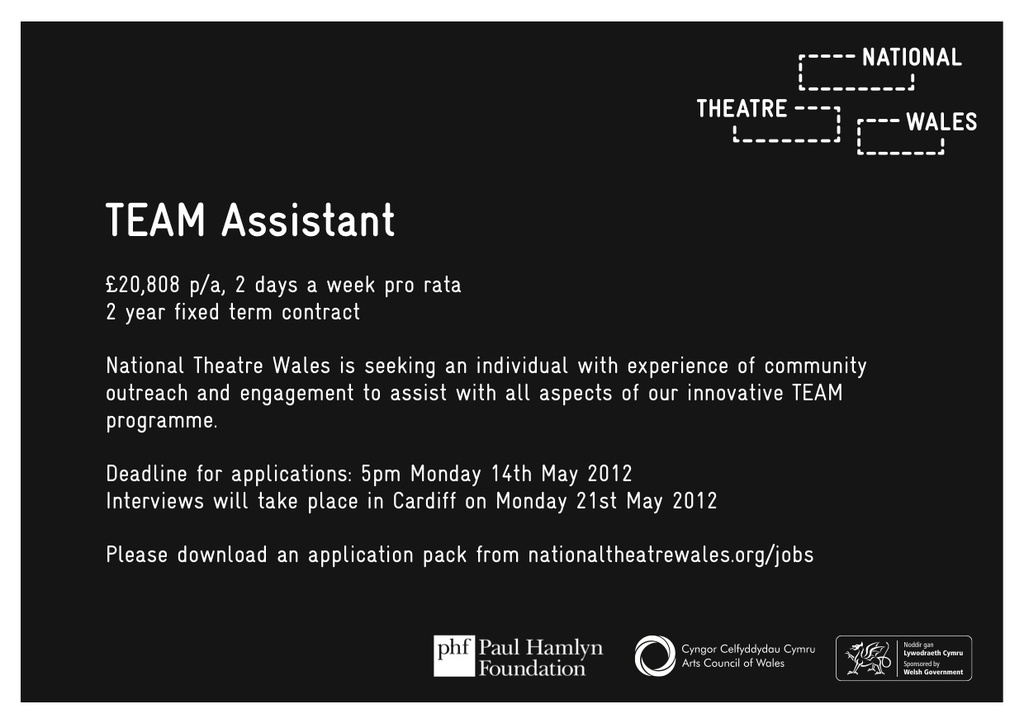 What kind of opportunities would you like NTW to offer you?

Since our launch TEAM members have performed in our shows, made films, blogged, run workshops, started up their own projects, and told us their vision for NTW.