In the next couple of weeks I'll be reviewing some much anticipated theatre at Sophia Gardens, as part of Cardiff Everyman's Open Air Festival.

Excited much? Let me think about that for a moment...


Uh, YES! And not simply for the shows (though Taming of the Shrew and Blackadder II are both definitely right up my street, not to mention the 'squeeeeeee' that I feel about a live version of The Little Mermaid), but, somewhat unbelievably, this will be my first taste of… Continue

“Don’t underestimate what is brewing in fine bone china cups…”

From the ashes of a town that is trying to reignite a new flame comes this unique, site specific performance, the debut production of Bridget Keehan’s Papertrail theatre company.

The glamour and tradition of opera is celebrated in WNOs only ‘staple’ offering this season. La Traviata, an opera which fits perfectly within the Fallen Women theme, introduces Violetta, a frivolous, flirtatious courtesan whose lavish life is interrupted by the young, persistent Alfredo, who persuades her to embrace a monogamous existence with him.

Despite her resistance, Violetta lets her heart guide her…

Backstage at the TCWAs 2014 - A Young Critic's Experience 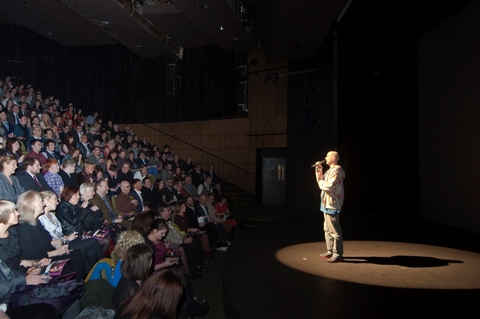 The second Theatre Critics of Wales Awards went off without a hitch on Saturday 25th January, 2014, due to the hard work, commitment and support of a great number of people and organisations, and I was honoured to once again be part of it.…

An explorative plot that aims to address the wider issue of Scottish Independence, I’m With The Band, sees The Union, an indie rock band made up of an Englishman, Scotsman,…

Short, Sharp and Packs a Punch

Broken Souls' debut production, Shadow Boxing is a play with a heart that takes a look at male sexuality in a testosterone fuelled world. Flynn, an amateur boxer who’s desperate to go pro gives his life to his sport; not your average twenty something, he shirks drinking and sex to focus…

Wagner Dream (WNO): An honest rather than analytical review…

A complex, challenging piece for an opera novice…

Despite attending the pre-performance talk, expertly given by the Nick John trainee, Sophie Rashbrook, in which she emphasised the unusual usage of electronic sounds and the uniqueness of this 90 minute opera, I still took my seat expecting to hear fine, fluid melodies and to feel moved by the storyline or, at least, the plight of the… Continue

With such winning components, it would be hard to make a hash of it...

Following acclaimed productions of 'A Doll's House' and 'God of Carnage', Director Emma Lucia has once again brought back to life a much loved play, with a pace and energy that is fully engaging and as fresh as it would have been in the 80s.

The accomplished Richard Elfyn (Pornography; The Wizard, the Goat and the Man Who Won the War) is a joy to… Continue

For a lot of people, Christmas is more bitter than sweet, with loved ones who are no longer around missed more amid the happy chaos of the usual celebrations. It's a time we build ourselves up so much to enjoy that, often, it's a disappointment when it finally comes around (especially the staff Christmas do). And a time when, custom tells us, we should be… Continue

All good contemporary art is open to interpretation. Roy Campbell-Moore and Sue Williams’s collaboration, Cracked is no exception,…

Award Ceremony for Theatre in Wales!

Before it Rains - Young Critics Review

A play with the potential to become a hard hitting classic...

Set between the bereft garden of a typical 'Shameless' style council estate and a deserted woodland, Before it Rains tells the story of a desperate-to-be-young mum Gloria and her struggling-to-fit-in son Michael, and how their lives are affected by the appearance of the emotionally…

We are still looking for key extras for the short film 'Size Matters Not', being shot from 12pm-9pm on Thursday 9th August in UWIC's Cyncoed Campus and the surrounding area.

-males and females aged 16-25 to play the friends of the main characters
-male 'basketball players', under 35
-a tall, broad 35+ male

Whether to add to your credits and showreel, or to get on-set experience, this will be a worthwhile opportunity. We can also pay expenses… Continue

Call out for Actors

We are making a short film in Cardiff called 'Size Matters Not' and need actors to play the two main roles:
Will - Young, self-conscious, with a 'little' problem...
Fanny - Young attractive girl; love interest to Will

This is an 'expenses only'… Continue

The diversity of each performance from Dance GB made for an exciting and dynamic experience that no list of adjectives could adequately describe.

Scottish Ballet’s Run For It was full of peaks and troughs, working through John Adams’ Son of Chamber Symphony which both juxtaposed and complemented the beauty of the dance. Dressed in… Continue

Sitting in the black and pink bedecked 'bar' of Swansea's Evening Post Theatre, listening to some of my favourite rom-com soundtracks, a gaggle of women around me - this musical, in the final week of its record breaking 22 week run, already promises to be a night out any girl will love...

An intermingling of stories hinting at deep passions and perverse thoughts, Pornography allows us to glimpse the inner transgressive nature of a diverse selection of Londoners, during the summer of 2005.

The effective use of the senses really helped bring this piece to life and engulf the audience in the moment, with sounds not just coming from…

A sketch of the animalistic nature of Swansea…

The experience starts as soon as you walk through the front doors of Cardiff High School; huddling in the stairwell before a girl with a walkie talkie directs you upstairs in small groups, to experience the journey to the auditorium – a well designed walk, where you are subjected to primarily unnerving sounds of war and army barracks, which contrasts dramatically with the adorned High School walls, proclaiming netball fixtures and displaying the colourful works… Continue