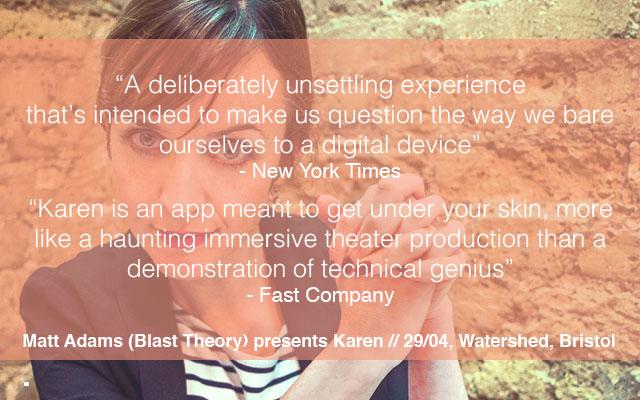 In the design of systems it is often what we cannot see that is the most valuable. In our emotional design as people it is the trillions of molecules that inform our feelings about who we connect to and why. In the design of our workplaces and social gatherings it is the air of culture that floats around us forged through our…

Karen is Now Ready to Meet You! But Am I Ready? 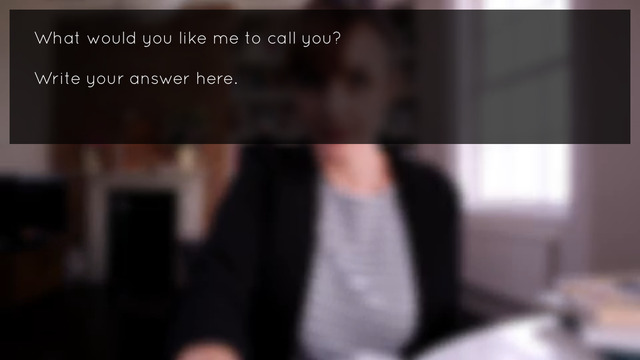 What does opening night feel like for you? I'm sitting here in my home in Chicago. It is 9:18PM CDT and Karen has been available for download since this morning. I'm sitting here wondering if what I am feeling is normal or odd or stupendioulsy lovely. I am most certainly thinking I need a glass of wine.

It has been three years to… 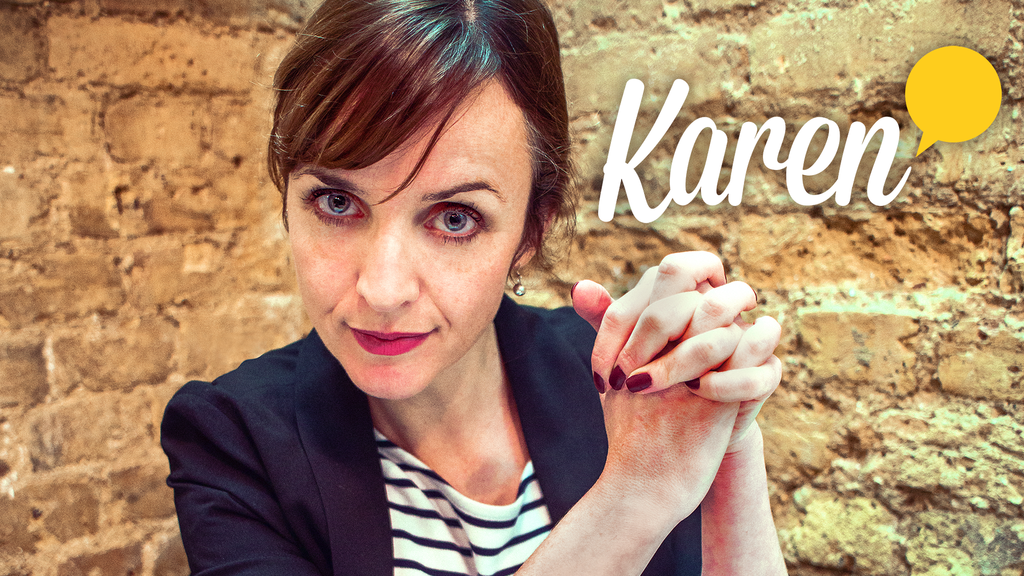 Karen is a digital storytelling experience you can enjoy through a smartphone app. She is a chaotic lifecoach with blurred personal and professional boundaries and she develops a relationship with you by asking you questions based on psychological profiling items.

There are a lot of women in Wales who inspire me. One in particular I wrote about for international women's day last year. Here name is  Hester (‘Hettie’) Millicent Mackenzie (nee hughes) and she was the first female professor appointed in the UK. The year was 1904, and she was appointed as a Professor of Education at Cardiff University.

For International Women's Day in 2013, I was approached by…

On #IWD millions of people around the world come together celebrating achievement or fighting for justice.

Who from Wales Inspires You?…

Last Call for #WOWWales: Do You have the WOW Factor?

On the 9th of March, Cardiff University will take 50 people, men and women, to represent Wales at the 2013 Women of the World (WOW) Festival at London Southbank Centre. If you are 18-30 and living in Wales* and want to be considered to be part of the group at the festival, share your story, poem, photography or film on the theme: "Living in a World of Digital". Info:…

Storytellers, poets and media creatives we invite you to share your digital story!

Cardiff University has partnered with London's Southbank Centre to offer 25 individuals (18-30 years) from across Wales the opportunity to attend the 2013 Women of the World (WOW) Festival in London on Saturday 9th March.

The idea: To share stories of what it means to be 'Living in a World of Digital – Past, Present or Future.'

I'm currently in Chicago for work at Northwestern University for the next three weeks, than on to New York. Would really love some advice on .. who, what where I should venture to experience theatre and the creative arts while I'm stateside in Chicago and New York ... it would be awesome ...

Love! A Harsh But True Reality!

This was the emotive essence that stayed with me after NTW's latest production (NTW07). A testament to both… Continue

War is a Tragedy and Sennybridge a Star!

This week I was fortunate to make my way up to the Brecon Beacons and see NTW's latest production ... The Persians (#NTW06). So what did I make of the experience?

Let me first provide some context. Did I know much about the story and it's history - a little bit, but not really. I knew it was a Greek tragedy and a Greek Tragedy is usually about love or war or both. Did I know it's significance as the… Continue

This month myself and three students at Cardiff University are working on a project with NTW on Marketing Theatre. One of the key areas we are looking at is reaching and attracting youth audiences.

I'm very passionate about youth and the changes we are seeing in younger generations, especially due to the changes in technology and entertainment choices. I'm over 35 now (shhh!! don't tell anyone! hee hee), but I teach Digital Media &… Continue

Do audiences have a place in the NTW Community?

Myself and three students are working on a marketing project with NTW and a key area we are looking at is the role of theatre audiences in the NTW Community.

From being part of the NTW Community, we've noticed that the community is mainly made up of professionals working in the creative arts and theatre industry in and around Wales. This is great as an industry network, wherein you can connect with colleagues and like minded souls on theatre productions and share skills, experiences… Continue

I've not blogged a lot on NTW, but been a silent observer of all the wonderful activity as I love chatter in social networks and love theatre from an audience perspective!

But tonight I received a friend request from a dear splendid and intelligent soul - Kirsty Wilcox. Kirsty has only been in Cardiff a few months and I met her rowing in a… Continue

People are more likely to watch a play if they know somebody in it!

When faced with these challenges they discovered one core insight: People are more likely to watch a play if they know somebody in it!

The concept is really insightful and fresh! It is not about… Continue

The theatre and Me!

How do I define being a fan of the theatre?

Escape. This is a another however I work in an environment that is critical, analytical and mainstream business. So to escape to the theatre, to be part of something creative is why I… Continue

This show was awesome ...