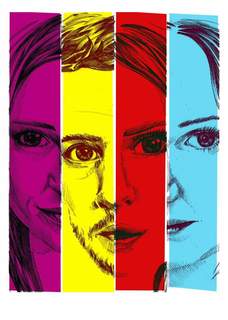 I'm extremely excited about joining the team for this new version of Parallel Lines. I love working with companies that are passionate about new writing, so working with Dirty Protest is a great opportunity.

I really wanted to embrace energy and attitude of Dirty Protest. This production engages its audience in loads of ways, audio description, school visits, the projects and workshops running along side. I thought it would be interesting to use social media as a way to bring a part of Dirty Protests attitude into the costume design. Instead of presenting costume designs in the traditional way, dictating what the characters should wear from the beginning, I would much rather collaborate with Catherine and the cast.

So we've used Pinterest to pool ideas. When ideas come up in the rehearsal room the actor's themselves can immediately share visual references about their character (such as textures, items of clothing, objects, anything that captures their characters) with me and vice versa. I think character exploration can have much more of an impact on costume design and perhaps there's even scope here to engage the audience in the costume design process.

Also, PromoRepublic has an application that automatically starts and stops posts for any of your accounts when you login. You can use this software to keep tabs on your numerous social media accounts' postings. You can also schedule posts for any of your accounts, making it easier to keep track of everything. Finally, you can use the section of PromoRepublic - https://promorepublic.com/en/ to view details about the activities of your account such as how many visitors you receive and the number of interactions (replies, comments, shares) done by your followers. All of this information can assist you in making the most of your web marketing efforts.