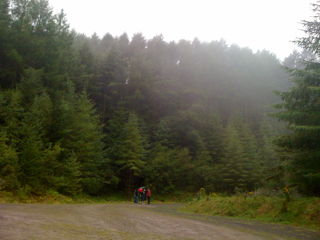 It was a beautiful setting. Tall trees, green embankments, mist-covered valleys. It was the Afan Forest Park and I was there on Saturday evening ready for Taking Flight Theatre's production of A Midsummer Nights Dream. As were seemingly thousands of midges, who swooped and dived at our skin every time we stood still. As the crowd gathered into an audience, the Mechanicals of the play started to play songs and encouraged a sing-a-long. Then the play began: with the line "Is all our company here?" And the audience chorused, "yes!"

And so continued the play. It was wonderfully cut-down to only 2 hours and brilliantly edited. All the key story elements were intact and the nuances of the language beautifully expressed; the comedy was uproarious and the characters' passions worn so frighteningly on their sleeves, we often felt compelled to want to intervene like Puck and set things right.

The performances were uniformly fantastic; Beth House stood out as the most petulant Helena I have ever seen, but oddly also the most sympathetic. The use of sign language throughout the performance by Puck added an extra depth to the whole show: obviously as well as making the play accessible, BSL also allowed us to see the production through 2 languages and showed how omnipotent the fairies are in this world, being able to be anywhere and get involved in any human activities.

I read on their blog that Taking Flight Theatre aim to "create integrated, accessible performances in rural spaces" and if this show is anything to go by, they have definitely succeeded. The production was integrated and accessible in the purest sense: as an audience, we felt welcomed, celebrated and absolutely central to the performance, no matter what backgrounds or abilities we had. There was a 2 year old boy and a grandma who were both equally absorbed by the performances and stating - obviously in their own, very different ways! - how much they were enjoying themselves.

Children ran ahead with the mechanicals to guide the group on the performance's promenade route and we each carried a tea light holder to help light the final 'play within a play'. It was so delightful, many audience members at the end were compelled to tell the actors how great they found the production. This reminded me once again of how central to performances audience members should be and how generous we are as audiences with our time, money and spirit. Of course we should be celebrated and integrated into accessible performances! We are great!

As we drove away into the coming dark, I saw the same 2 year old boy playing with his grandma and his older sister in the ampitheatre where the play-within-a-play had been. He had on a blue waterproof jumpsuit with the hood pulled over his head (probably to avoid the midges) and was jumping around like the actors had done. It was poignant thinking how this 400-year old play had affected him and how this theatrical experience could potentially influence other moments in his life to come.

A Midsummer Night's Dream by Taking Flight Theatre has been touring South Wales since the end of July. It has a few more performances in Neath Abbey on 29th and 30th August. Try to get there if you can.