An incredible week on This Incredible Life 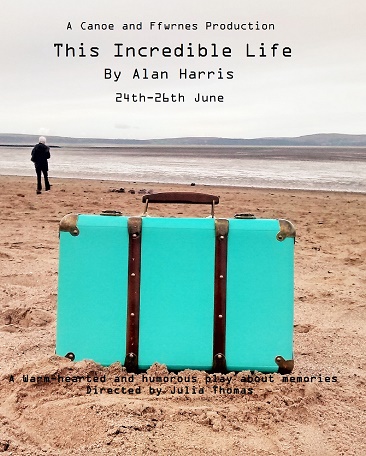 Canoe started their first week of rehearsals of Alan Harris’s play This Incredible Life last Monday and as we go deeper into the fantastical world of Nin Timmons, it’s good to look back at the journey we’ve made so far.

I’m currently based in Leicester Curve and so the feeling of coming home to Llanelli to make a play was like the same feeling I had Christmas day when I was seven. I can’t even begin to describe it but I was raring to go!

We started the first morning with a reading- it was one of the most fascinating I’ve ever been part of as Alan’s play doesn’t dictate who says what or how many characters there are. Our three actors Sharon Morgan, Elin Phillips and Simon Nehan arrived to read aloud my gut reaction to who may be speaking. So in keeping with this I told them to enjoy reading aloud their gut reaction, that instinctive connection with the text that make first readings sizzle!

Needless to say, we learnt a lot from this reading and it helped us to start to piece together what the rules of the play were. Knowing that we only ever make rules to enjoy the possibility of breaking them! We then had a look at Charlotte Neville’s brilliantly exciting design- we are transforming the theatre at Ffwrnes into a giant gauze box Studio which will be both intimate and epic.

The afternoon continued in the same rule making - rule breaking spirit with a music session with composer Richard Barnard who will play piano, saxophone and clarinet live and this will be created with the aim that it can be improvised to work with the text and the spontaneity of that. The play moves so swiftly between time and place that we had lots of fun thinking about what a cryogenics lab sounded like and the top of the Eiffel Tower in 1966 along with other exotic locations such as The Thomas Arms Llanelli…

We returned to the Eiffel Tower with our film maker Jorge Lizalde who will be using his beautiful work on memories to create a series of fragmented images that will be projected around the auditorium creating a cinematic experience.

I couldn’t stop smiling at the end of the day having spent it with people brimming with inspiring ideas and possibilities. Other highlights of the week were our filming ‘on location’ in Llanelli as we scoped out the places that Nin talks about in her stories. After reassuring the gardeners in Park Howard that we weren’t really going to cut down any of the plants with the shears we had brought to film with they became part of the crew, offering to fill up our watering can. That was quite lovely.

Back in the rehearsal room we worked on piecing together the relationship between grandmother and granddaughter along with finding how we shift between time and place, story, memory, fantasy and history.  It is such a rich and imaginative play, and digging deeper unearths so much!

We open on the 24th June with a Dementia Awareness day hosted by Ffwrnes and The Alzheimer’s Society- more about that anon. And there will be 4 performances over three days- with plenty of travel options for those who don’t live in Llanelli.

I hope this blog has made you curious enough to come and experience this wonderful play in Llanelli- if not, did I mention there is a French talking pigeon in it?