...barely visible new things, for those who are barely looking?

At the risk that these periodic fragments may seem increasingly like a series of tangents, I have just posted a selection of police cctv surveillance footage from work that Mike Pearson, Ed Thomas and I were doing together in Cardiff, back in the autumn of 2002 [ less than fragments, post title standing still in cities ].

Not as an illustration of any specific thought. Simply because something in my thoughts brought the image of them back to me, strongly enough to make me dig them out and look through them. And because it can often be useful to revisit familiar places through the lens of past actions, especially when thinking about those places as the context for new ones.

This past week, I have been trying to find a bit of time to reflect on some the choices and consequence of my recent work. With limited success, of course. But sometimes, simply defining the intention is enough to start to move a few things forward.

It has been a full summer. And my past six months have also including Entitled with my old friends at Quarantine, and The Salon Project with new friend Stewart Laing. But what I am pondering on specifically is the blatantly direct Just a little bit of history repeating project that Rosa Casado and I have just completed in Bilbao, and our equally succinct What if everything we know is wrong? intervention in the US a month earlier.

There are questions in these projects that have been present in my work for as long as I can remember - questions about how to work simply with what things are, about what becomes possible when you just drag a proposal into the middle of a crowd, about my use of public space, and about the meeting place of these events - questions that I am now, inevitably, turning back on to my thoughts about Coriolan/us.

And having managed to get a little distance and perspective on them, I am reminded just how much context shapes and defines the reality of how these things are ultimately met. I am reminded that it has never been simply a question of 'what to do?' - but always either 'what to do here?' or 'where might we do that?'. And that even within familiar frames, context shifts constantly.

Clearly, social space is never quite the same place twice. Once something has happened, it becomes demonstrably possible - whether it is stepping onto the moon, or simply standing still to engage police survaillance cameras in an attempt to get a city to see a bit of itself. Then, to do it again, or take the next step, or not, becomes just a matter of choice and opportunity. And of course that is always at least part of the point - there are many things that I have done simply to get beyond them, to a place where those things have happened, and therefore can happen.

But the reality of locating these new projects has also reminded me that, recently, the thing that has been quietly demanding the most navigation from me, has simply been a progressive shift in expectations.

Even casual questions can become obstacles if no one is expecting them.

And clearly, if something isn't looked for, it isn't going to be found - whether it is there or not. Unless, of course, someone just trips over it... 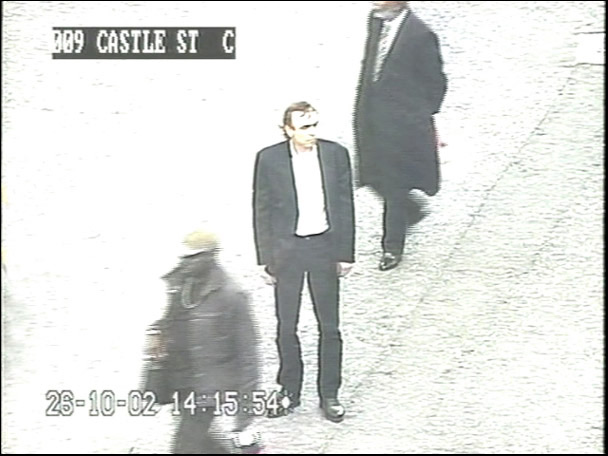 John, thanks for the interest. The focusing is all surveillance officer, his name was PC Lowe. There was five people standing in the city centre simultaneously that day, also including Boyd Clack and Islwyn Morris, and they were found and recorded one after the other - but we never used them as a sequence in that sense, more as isolated incidents. From the view point I am returning to them with, these are simply three of the clearest fragments, in the order they came to hand.

hi mike! - fascinating video - is the focusing an automated response of the camera, or an automatic response of the technician/ surveillance officer? - and i'm curious to know why you made a chronological sequence and then show it out of order? i wonder also how much surveillance techniques have changed in the intervening 10 years... cheers. john