Before It Rains - Sherman Theatre, Cardiff

Before It Rains, written by Katherine Chandler and directed by Róisín McBrinn is a modernised story revolving around three characters: Gloria (Lisa Palfrey), the drunkard mother who has hidden her son away from the world, Michael (Craig Gazey), the autistic son of Gloria who finds stress relief through repetitive gardening in their allotment, and Carl (Harry Ferrier), the wildly ‘asbo’ esque neighbour who finds pleasure in bullying and twisting Michael into uncomfortable and stressful situations.

The play, set in a current day Cardiff council estate is reminiscent of life-like situations such as troubled parents, neighbourhood quarrels and problems that occur behind closed doors. Writer, Katherine Chandler, offers an insight into these ‘quarrels’ that sends the viewer into a feeling of apathy towards all characters involved as the play goes on.

Before It Rains features many different styles such as a life-like monologues, allowing audience members to relate to central characters; as well as animalistic values in fight scenes and abstracting dance scenes which serve to disconnect the audience from the emotion and explore different characteristics of deranged and mentally unstable characters. Spoiler Alert. This idea of animalism was made apparent towards the end of the play when a central character is “Put out of its misery” – a quote from Chandler when discussing different styles of the play. A lot of the non-verbal scenes in the play were based around an inviting rhythm that connected different characters to each other, emotionally and physically, namely the reverberating sound of Carl’s football bouncing over and over whenever he entered the set. This use of props was intriguing to watch as an apparent one-sided prop would be used in a dance or for a complete different purpose than for that it was intended. The set itself was like a virtual playground for the animal characters to explore and run around. Upstage featured a surrounding platform with huge floor to ceiling pillars that resembled a woodland and even more intriguingly the centre stage area featured a huge mound of mud, of which Michael would repetitively pummel with his garden spade. This mound came right down onto the seated audience area which gave the impression that you were on the allotment with the characters, particularly when you felt like you were having bits of mud and dirt thrown in your general direction! The use of this intricate set design twinned with the animalism and emotionally involved characters gave the impression that you weren’t watching a play with just three actors performing, yet more like a whole ensemble of performers who were filling up the performance area with their rhythmic dances and choreographed dialogue.

Chandler labels the Michael character as not such a character that draws sympathy from the audience, but more of an ‘educator’ with the main intention of allowing the audience to think about how to act towards people in Michael’s situation, metaphorically, and literally due to Michael’s incessant splurges of intriguing facts after seemingly unrelated quotes from other characters. This gives the impression that Chandler is using her play as an output for her political angst, made more believable when she explained (in a post show talk) that the play was loosely based around a story in a similar setting with an identical back story to that of the Carl characters family situation. However, I believe that the play is more of a showcase of these blatant social issues and serves less of a‘Change the World’ message but more of a ‘Here are some current cultural and social issues, do what you will with them‘ message.

Personally, I enjoyed the depth that Chandler went into with each character. As an audience member I really believed that the performance was a real life event, even when the play featured abstractive dance scenes that you wouldn’t see in real life. I could relate to the characters because I personally know three different people who are very much like each one of the principle roles. My only criticism is that sometimes the play lacked in tempo. A large portion of the play was taken through duologue’s between the main characters, sometimes exceptionally long duologue’s that left the audience feeling sometimes bored and wanting more action, whether this ‘action’ came through an extra character such as Carl’s father/brother or not is the question. The play, at ninety minutes long could have even featured a short interval to break up the extended dialogue. Even so, I did leave the theatre wanting to know more about Michael’s situation. The set design was so intricate and detailed that it is quite possibly my favourite ever set. The theatre itself helped this, being a small seater, maybe no more than 120 seats, it allowed me to really connect to the characters, particularly Gloria and Michael.

Overall, I would give the play a 4 out of 5 stars and would thoroughly recommend anyone to go and watch this well written drama, but only if it were to be performed in a small space like the Sherman as a big theatre would take away the whole moral and effect that Chandler intended. 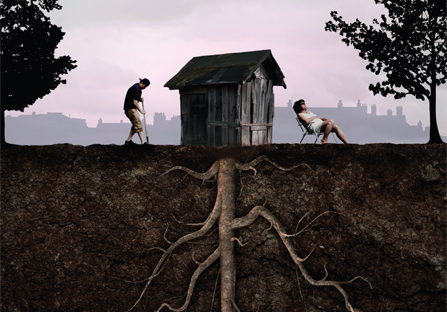