blurring edges and touching worlds, a letter to summercampers 14

I posted this letter on the Summercampers 14 facebook page a while ago but was asked to share it here too, so here it is (and the photo is I think by Josh Alan Trask and video installed at 'the jetty' by Jac Ifan Moore, Jack Furness, Dom Farelli) : 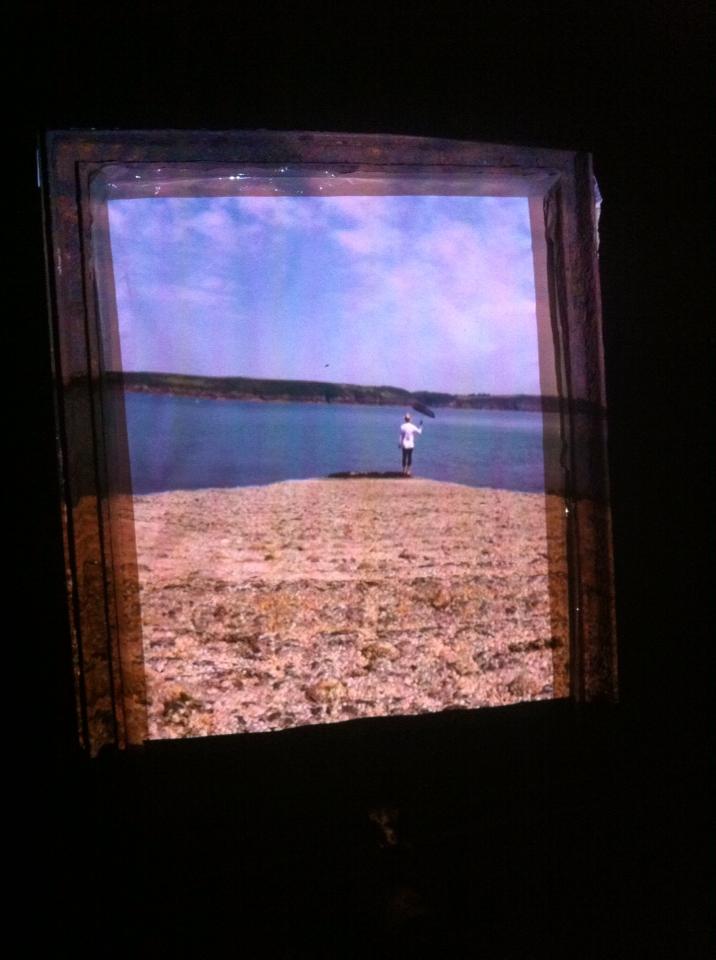 I dreamt last night about worlds within worlds and I went to sleep last night thinking there were so many worlds within worlds at summercamp. There was also a world in my dream that existed in a sort of bubble – all its environments were separated from the air high up by some kind of transparent skin. And on the way home from summercamp (in my dream) there was a holding space like part of an empty airport terminal and where Jac seemed to have settled in before the rest of us (you were very calm Jac, whilst I kept saying indignantly “this isn’t Haverfordwest!”).

I guess I come away from the two weeks trying to make sense of it all and I don’t know about you but it always takes a good four days after I return from an ‘experience’ like that before I really feel the transition – like I have been in that holding space in between, and now I’m coming out into another space and land and it feels both familiar and unfamiliar. A re-alignment.

Looking at all the photos and responses online there is recognition of places where I was and places where I wasn’t, I know that sounds obvious but it heightened for me an awareness of how each of our journeys/travelling through of that space and time (and now memory) is so different; how we moved together and apart in different configurations, discovering crossing points for intense moments and experiences, then moving apart again - intimacies made, built, found and sometimes lost again. A magnified microcosm of life. The sense of how at home I feel in my skin and in a group intensified: for me at times a little lost and alone and at others found by conversation and company; quite often floundering, then floating, buoyed up by you as if by the salt of the seawater.

The relationship with the sea and the entering and exiting of bodies of water was a prominent feature: as costumed characters, as naked unadorned bodies, as half humans, post humans, scraping, walking, sitting, waiting, rowing, leaping, skipping, sliding, running, diving, laughing, screaming, talking, crying, silently … My exits and entrances were mostly in quiet moments with a few others, with the exception of the hilarity of floating ‘off chair’ and ‘off camera’ which became my ‘taking a moment’ at the edge of the ocean with Farah (but not as Farah intended - sorry if I lowered the tone). Then there was the beacon and the jetty, inhabiting the spaces between land and sea, always present, constant and open – to the tides the weather, the stars – both enabling passages and night crossings of different sorts, one inviting human gatherings, the other coming closer yet always just out of reach.

In small ways our explorations affected those around us, and in turn their explorations/experiences affected us -  in the village, amongst staff and visitors at the fort …  we puzzled, entertained, irritated, worried, disturbed and inspired people.

Strangely I found myself looking landward much of the time and toward the enclosure of dark forgotten and abandoned spaces, looking for daylight and sustenance there. As Heeran pointed out, it can be hard to know how to respond to the world in such a beautiful place. Yet it always depends how we look, how we ‘attend ‘. And we discovered many layers of looking, sounding, being,  listening – via portals of all kinds: lookouts, frames, gates, doorways, protecting walls, dark, hidden spaces to be enveloped in, looked out from.

I am often reminded of the directive ‘beauty as the thing that feels wrong’:  what happens if we see the beauty in what we often reject or resist, or don’t notice. There were constant reminders of this at Dale in the presence of military history and distant oil refineries. There was so much of this discovery being ‘mined’ by us in the landcapes around us and between us and inside us, Cat asked us what failure means to us and there were wider sharings of failure and loss and pain as humans, as artists. I often find myself at the edges, maybe we all feel like this in a way, because our worlds and trajectories can only touch, travel alongside; we can never be entirely within another’s experience, though we do sometimes find ourselves stretching towards (attendre, attending) and into the boundaries of each others worlds, beyond touch. I can still feel the traces. The edges are blurred after all.

In terms of my practice I have discovered so many new ways of layering and finding material and of sharing it – and surprisingly text seems to have come more to the fore, finding a voice in the meshwork of making. Encounters with all of you influenced the choices I made and I rediscovered making solo performance as a collaborative work.

I have more reflection to do before the next steps of this become clearer.

I would love to know where your next steps take you and would really welcome taking some more together – lets stay in touch and continue to inspire each other!

Have a look at this! #HailCremation is coming to @NewbridgeMemo in March, and we're loving hearing @RobertDowneyJr talking about Dr William Price! For tickets, see the link in @jontreg's tweet below . Rhian https://twitter.com/jontreg/status/1221015445735706625 …

Have a look at this! #HailCremation is coming to @NewbridgeMemo in March, and we're loving hearing @RobertDowneyJr talking about Dr William Price! For tickets, see the link in @jontreg's tweet below