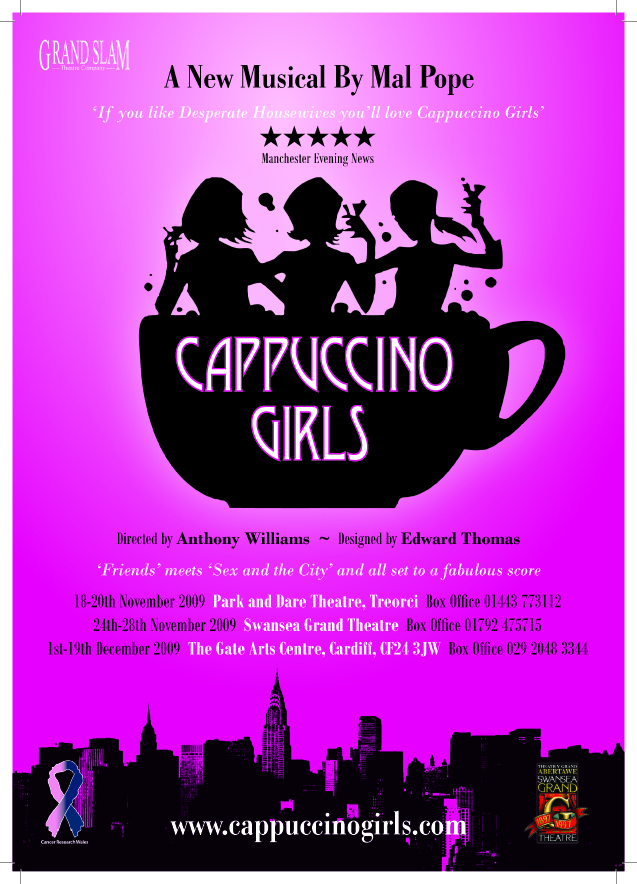 I just wanted to let you know about the first production by Grand Slam Theatre Company. 'Cappuccino Girls' is a new musical written by Mal Pope. It had a short run in Manchester earlier this year and received a 5 Star review from the Manchester Evening News.

The musical tells the story of 3 girls who meet every day for coffee after dropping off the kids. They appear to have perfect lives but when Eddie, the Barzilian barista wakks into their cafe and into their lives you know nothing will ever be the same again. It is supposed to be a great night out with tears and laughter but does look at the issues women face at this stage in their lives straight int he eye.

The show opens in the Park and Dare, Treorci on 18th November before moving to The Swansea Grand theatre 24-28th November.

Th most ambitious part of the project is to run the show for 3 weeks up to Christmas at The Gate Keppoch Street in Cardiff. This church has undergone a £3 million conversion providing the perfect spoace for the show. The show will run from 1st -19th December with a special gala perfromance in aid of Cancer Research Wales on Sunday 20th November.

There is more information on the website inclduing a video of the show in Manchester set to the Bonnie Tyler version of the title track.