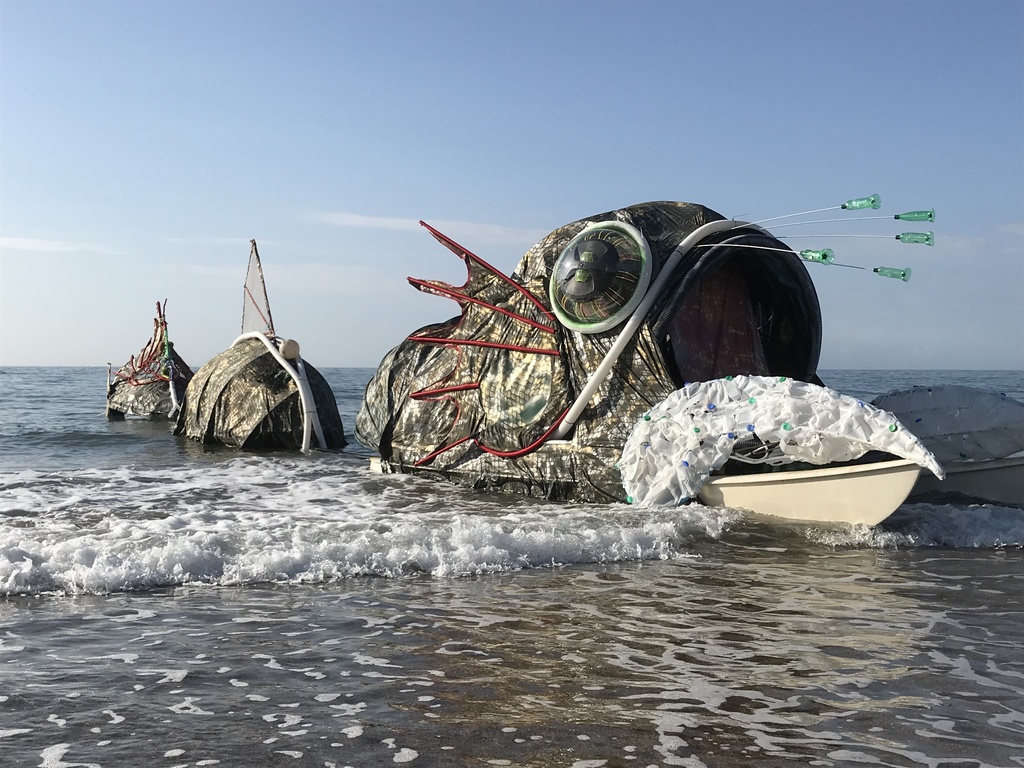 From inside the belly of the beast:

Small World had an idea, let’s make a monster that comes from the deep, a mysterious big presence that arrives on a Welsh beach and drops off a load of ocean plastic. Somehow communicating that this stuff is new to the ocean environment and not wanted. For millennia the creatures of the deep did not have to deal with this new element. And now You humans can have it back.

We will build a floating platform and use recycled materials, ocean plastic and the flotsam and jetsam that drifts in the sea and a wealth of other recycled materials found, saved and sourced to construct this work of art.

Small World Theatre has made shows featuring floating plastic islands and talking turtles choking on plastic. From inception  and have been a theatre company with environmental themes and sustainability at our core since it founded  in 1979. Imagine how David Attenborough’s Blue Planet upped the tempo after we have put in our bid with Visit Wales to tour this in the Year of the sea.

By the time we had the go ahead the beaches in West Wales were spotless and visible plastic free due to a fantastic community response. Great but we will have to go to the yard where they dump it all to sift through for suitable plastic. In the meantime, build the floating platform.

Off for advice to Nick Newland of Swallow Boats. Sure enough great advice and what is this in a hedge a long thin hull and at a crazy angle and another hull. Its an old catamaran in pieces with a tree pining it to the sandy bank. Unearthing this discarded boat on the edge of the estuary, we had found a perfect platform to assemble and build upon.

Soon donated kayaks appeared from a Facebook call out. And with a bit of mending and adding old plastic 25lite drums on to them as out riggers we had a hump and a tale. All this inspired by the 16th centuary illustrations we viewed in the archive at the Lampeter universities s library.

The blue water pipe left over from the replacing off our villages mains water was perfect recycled plastic with which to draw in 3 dimensions creating the shape and a very old thin donated tarpaulin was found to cover the shapes of the head, hump and tail. This unified it,  and a scaly paint job helped too. Underground drainage pipe for lips and other detail pulled the design together. Hours of washing and flattening big plastic milk cartons covered the end of rolls underfloor heating pipe that made up the snapping claws and we were ready to cast it afloat for a test run.

Lighten the load, balance the boat, shift the transom and deploy a person in the tail with an electric outboard and an anchor and the next sea trial will have it working to performance standard. After 4 page risk assessment and contacting the commander of a missile base to make sure it was not going to be a target we sought high and low for insurance cover.

As we strike land the beach-based performance is in full swing. The sounds of the deep echo across the bay the monster’s the gills flap, the claws snap and antennae search out the dry land. The Crypto Zoologist and a strange aquatic creature meet the Cragen the audience greet her in the newly learnt Cragenish language. The tongue is the mechanism whereby the ocean plastic and other plastic waste is delivered almost vomiting it back to the beach.

First contact has been made with this sentient species who know the world as planet water as dry land only comprises 29% of the planet. 4,000 people at the last show.

Thoughts on concept and some Influences

Close encounters of the third kind

The beach as a performance space

The strand as no mans land, liminal and un owned.

Our arts and sustainability ethos

Other Artists and writers focussing on the deep

Is this an anthropomorphic representation of the deep a creature representing all the sea life? NO - The arts community would reel in horror. How tasteless how direct how tacky.

It is however exploring the idea if the ocean were to evolve a creature to communicate what would it be like ? made of/ Say? waste . it would have to speak of pollution. It would want us to grow up and take responsibility for our shit and be manufactured from recycled non bio-degradeables. Stop the unthinking heating up of oceans mindlessly. Care about fish stocks , Cofio Pysgotta etc.  or is that just us ? of course it is just us. We are Small World Theatre after all.  One makes work addressing interconnected issues for 4 decades so yes this is what we shall do. The work is not a sledgehammer if anything it is fairly soft and has a wide appeal. It has been described as a spark in the dark but as the world may seem to make great leaps backwards there is still hope when our beaches are so clean and crisp bag manufacture is in the public arena.