Critical feedback to the Response event 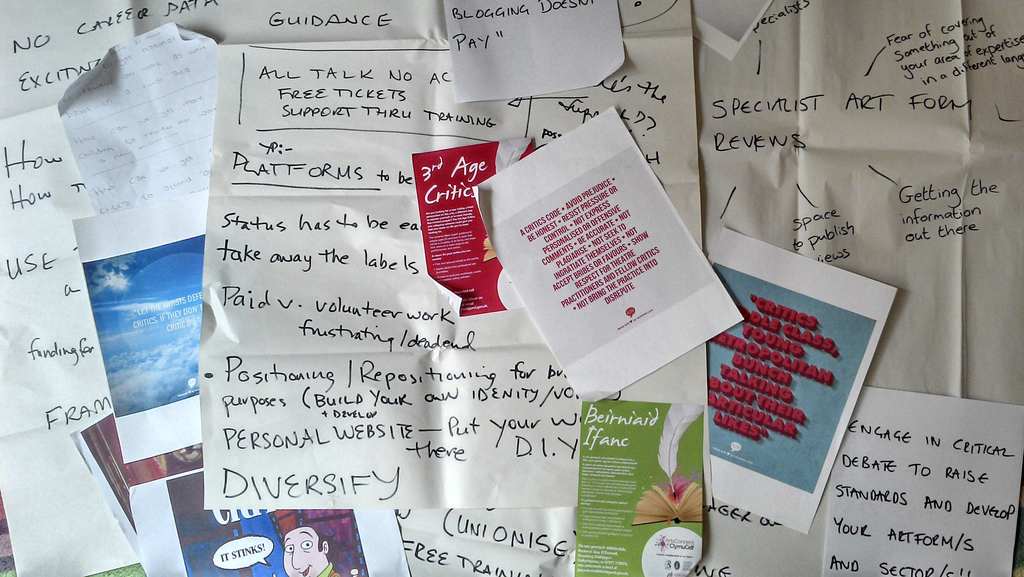 I recently organized ‘Response; Arts Criticism in the Digital Age’ a series of workshops and conversations at the WMC and RWCMD, participants shared their views on a variety of issues, including the on-going relationships between arts critics, venues, producers and artists, critical responses to Welsh venues’ work, the star rating system, arts criticism in the Welsh language, and the future role of the arts critic.

We had a great day of debate and discussion at the WMC on the Saturday; I have posted some of the discussion topics below. We are in the process of looking at ways to follow up many of these areas. If you have any views on the topics please do get in touch.

Tom Beardshaw of Native HQ ran a social media workshop at the RWCMD on the Sunday. Participants were tasked with making a response to the World Stage Design Festival. The workshop participants utilized a range of online platforms to create a variety of responses to the subject matter; most of these feedback methods wouldn’t have been possible utilizing traditional hard copy print methods.

Young Critics Chelsey, Charlie and Elin used Pinterest as a response method, the video app Vine was embedded into their pins on Pinterest, as well as links to their own individual blogs.

3rd Age Critic Leslie Herman Jones created a response blog on NTW, Leslie posted some really interesting thoughts on new and traditional response methods to the arts and a possible focus on the ‘young’ at the expense of the more experienced.

3rd Age Critic Barbara Michaels learnt how to create a tumblr blog during the Response workshop.

During the workshop. Barbara is really interested in the opportunities online offers to critics,"by the use of online resources being able to interact with those responding to the critic’s comments – which was virtually impossible under previous methods of publishing in a newspaper or magazine – the critic’s role in the 21st century gains both in value and status"

Jacqui Onions Administrator for Hijinx theatre and critic for the http://www.thepublicreviews.com/ , responded with a series of brilliant videos to WSD 13 and fully immersed herself in the exhibition creating her own art cart!

Megan Childs and Moon Noh from Theatre Iolo used video and photography to create a specific response to the Willow Theatre, The Willow Theatre, designed by architect Tim Lai and theatre designer Brad Steinmetz, both of Columbus, Ohio, USA was voted as the winning design of the sustainable temporary theatre space and was built for the event.

     Fear of covering something out of your area of expertise or in a different language.

     A constructive relationship with audiences and companies

     Give the audience an online voice

     The role of the critic to support marketing audience development

     The relationship with venues and companies trust /respect a well-resourced

     Insight into the developmental process of work

     Are people scared of being honest?

     Develop and build your own identity and voice

     Personal website but your own work out there D.I.Y.

     How to pitch and brand yourself.

     Frameworks need to evolve and will

     Approach people you admire and respect for mentoring

     If you can’t get paid for your work at least gets something else, skill share, editing of your work, etc.

     Welsh Arts Criticism, The people with the skills are there but blogging doesn’t pay

     Arts criticism in Wales is an unsustainable profession

     The role of schools education literacy what can be done in schools to raise critics profile, Arts in Education review       ACW?

     How many people do critics influence

     Should critics be engaging in online discussion

     The role of the critic in supporting emerging companies

     Getting the information out there.

     Space to publish the reviews

     A network for critics like the writers Antelopes group.

     A range of voices is positive

     Do you need to look hard for insightful criticism in Wales

     How to get more young people involved

     Fear of covering something out of your area of expertise or in a different language.

     Difficult to get a national review of our work as were based in a rural area.

     How can we get more children to review our work, specifically Open Doors Festival 2014

     Objectivity of Critics in Wales everyone knows everyone else esp. in Welsh Language