Digging Down R&D week: Before the Sharing, a reflection on process by Louise Osborn 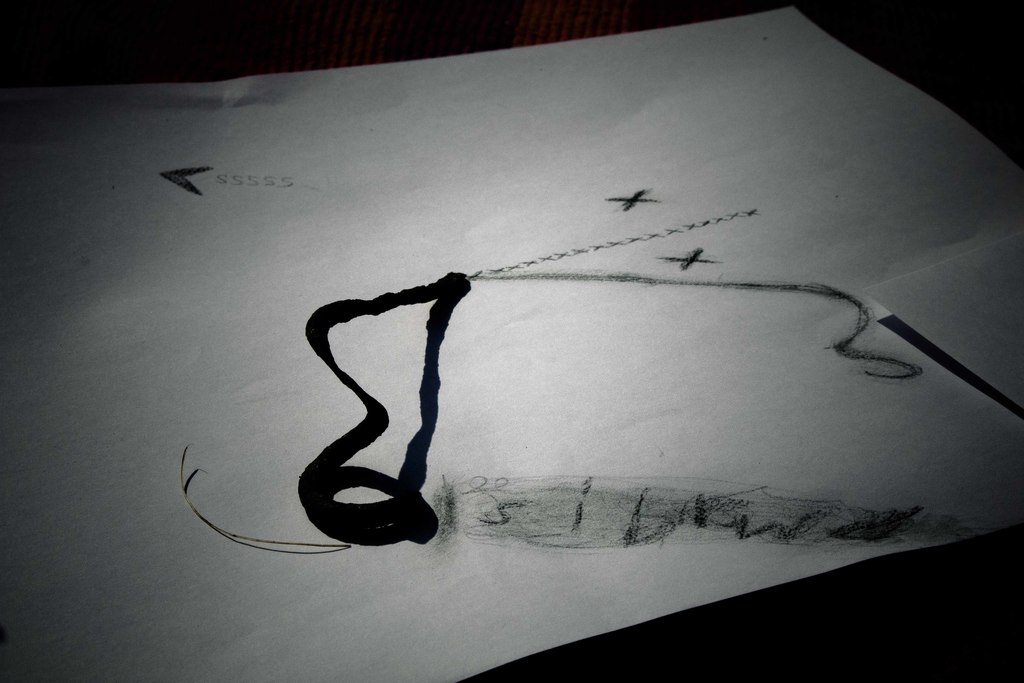 This morning (23rd April), Louise shared her reflection on our R&D week process. It moved me to tears because perfectly captures all the ups and downs and discoveries and journeys that I wanted to share it with you.

With many, many thanks, Louise, our wise and wonderful Dramaturg!....

A Reflection on Process - An offering - from Louise Osborn

The Quarry woman uncovers a midden.
The trysor spills, throws up.
Seeps from the soil, unbidden, to beg it's questions.

The forgotten fragments beckon. Do their bidding.

So begins her dig.

Fossilised weapons, remedies and poison,
Attachment toys -
And willow blue stowed in stone crack walls,
Tracing the landscape and the dead -
Uncovering the hidden women of Coed Gwydr.
Women from The Stolen Mountain -
Cut to size
Cleaving out their lives, in slate and soil and toil.

Forbidden in the Caban, their hands
Shape domestic hidden meanings in
Their casting outs - their throwings away.

She, the Quarry-woman, will dig them back.

She will Quarry their worry

She sets herself her own quest - to find the perfect fragment.

The perfect fragment, the missing piece.
Who is the Quarry-woman amongst all this?
What is her Quarry? Her buried midden?

Her place amongst the slate and water?
Amongst the flower lady and the grief and joys of predecessors.

As she, the Quarry-woman, works her tongue around new alphabet

Notices when the sun bows beneath the mountain.

Then, the pull, the tussle between attach and yield -
The artist's precious loneliness and the desire to share,
She puts out an invitation.
Can she give up her trysor hoard to the eyes and creative impulse of others?

Again she searches, digging out her excavation team -
She, the Artist now.
A Quarry-woman piecing her archeologist's dream.

They come to her Valley - bringing open hearts and song.
The red haired one ponders, quietly, gently
Offering and standing ground with soft French voice,
She, and the beautiful Bard, set tasks for the Quarry Woman –

With free words, and play, they dig her below her conditional self.

They gaze, carving their own meaning from the trove

With love -
Re- arranging her treasure, the Quarry-woman wonders

Who owns it now?

Clutching the Quarry Woman's chosen fragment.
And there, amongst the elements, she hears
The eeeeeh sound - echoed across mountains and generations

Colliding with the bleat of sheep -

And with Dirt under her fingernails
She laments to the E- marked stone.

Scratching out a new verse - an englyn-

Summonsing Ellen Williams,
Who helped to build this place.

The caban spins, dizzying, in the sphere of fence wire
A tangle of the past - casting shadows on stone.
She works fast - Reverb and torrent offered by the tall man

The Quarry woman mimics the birds, speaks of tapping ravens,
Scrawls on slate - and opens her throat and howls new vowel sounds
To the Welsh air. Finds a looser tongue - free writes beyond the pain of

Inner harping voice.
A foreigner. An archeologist. They make trips to the Midden. Sifting Soil.

She digs down deeper.

And journeying alongside them all,
Whispering her own weave through the cracks,
The grey-crone nudges her insights, her long wrought knowledge –

Together, they pay homage to the Stolen Mountain
Watch as a Craftsman splits slate into severed women of different size.

Into Princesses and Drains.
Into Tall Ladies, Thin Ladies, Broad Ladies,
Into blanks
And Caban Absence.

They eat and toast in Sam's cafe.
Raise glasses to the razed ground -
To industrious hands
To the exploded women and the trodden feet To the fragments -

They discuss the lies of men who Stand and Deliver a broken system.

They talk of the language of pieces, of dechirure.
Of water, ice and the elements.
Of the decaying nature of all things.

They pledge to give the women of the mountain their own Caban.

Later the others play - trespass her treasure. And when her object appear as toys

And there's too much noise
The Quarry woman freezes. A state of catatonia.
Is this what she meant?

Is this what it means to share her trove?

Her head aches. Her nerve is trapped.

She doesn't want to disappoint.
It's her thing.

Earth shakes and shifts. She holds her nerve.

Her headache lifts with pills and reassurance

Of reverence and soft touch.

Lay paper scraps along the floor,
Speak of invitation, not obligation,

Flood the space with the power of water.

And Reassert their magic three.
Their holy Trinity.

In torn pieces, mapping their offering
They move, place, move, shift
Anger, precision, envy - all find their way to the table.

As the Red curled one muses
The Quarry woman, for a moment, wishes to be inside her brain

To see through her eyes.
It's a familiar childhood feeling.

And like the slate they layer up, working with random choice and intuition,

The Quarry woman says it's worth is beyond measure

She'd give up twenty thousand pounds or more
For this.

And, in between the cleaving, she disappears to orchestrate.

Making consideration of the health and safety of her guests,

She greets the round Dutch chef, a warm presence,
Who offers seven courses,

A magic number from the illuminati.
Shapes emerging from the edible soil.
He suggests Gorse Syrup with yellow blooms,
Speaks of Victorians and their love for all things Mock.

She sends out messages and invitations.

To her emerging Caban.
Her tablecloth will be her canvas.
There, her guests will leave their traces.

That night they stagger, journeying through their map.
Through song and harp and wall whispering,
Through toasting and syrup of figs.
Through setting up and taking down and endless hand washing

The Greying one offers observations,

A sort of noticing. Reminds them.

Too long! Too much! the Quarry Woman cries.

Throw out our babies, less is more
Return to source - select through our successes

And what feels right.

The Quarry woman reminds herself of the task.

Nothing is completely formed.
This is her dig, her laboratory.
A corner of her canvas is all she needs,

She must let Ellen and her Guests in.

Together they reduce it down - to a fine syrup of figs.

The Quarry Woman boils over with excitement and lack of sleep.

For tonight she will bring Ellen, to the table, her very first Caban. 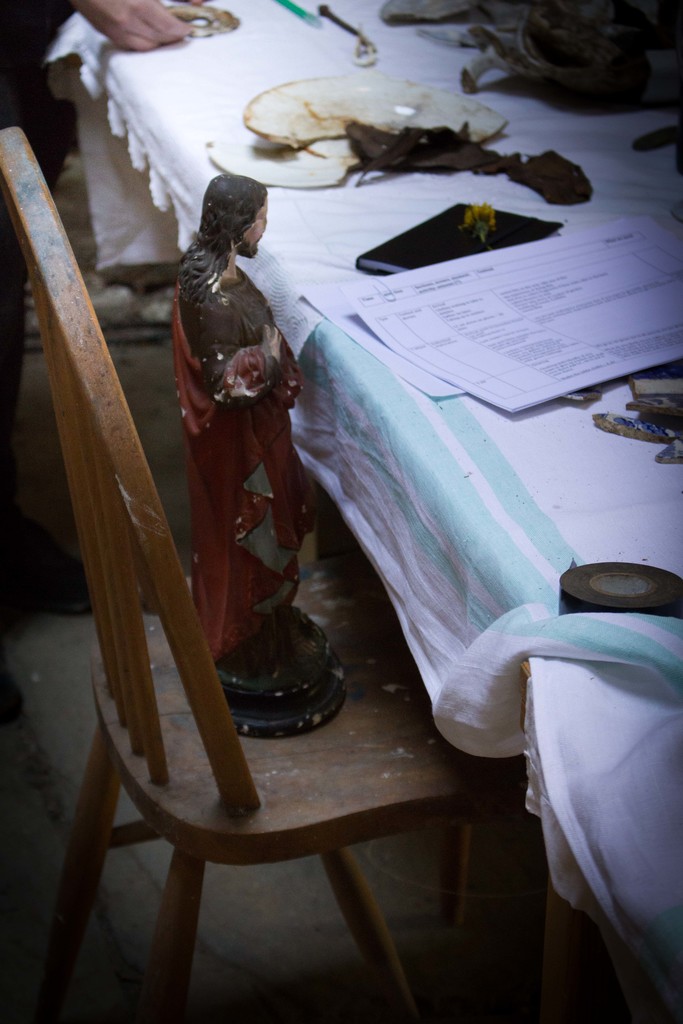