….a genre of performance in itself.

It’s quick, quirky, light-hearted, fun, interactive, cosy and site-specific. Delivered script-in-hand, it can only be described in long and punchy lists, peppered with hyphened words.

We want to make these nights of theatre as accessible, fun and casual as an afternoon spent drinking tea and eating chocolate bourbons.

Our first theatrical tea party was – fittingly enough – on the theme of Tea, and set at Cardiff’s The Pot cafe. It was devised and put together very quickly. The idea is that theatre, creative thoughts and experiments don’t have to be polished to be a valid form of entertainment and trying out ideas can be as much fun as polishing them. If we’re having fun making the theatre – we can only hope that the audience will have fun watching it. We certainly had a lot of fun! 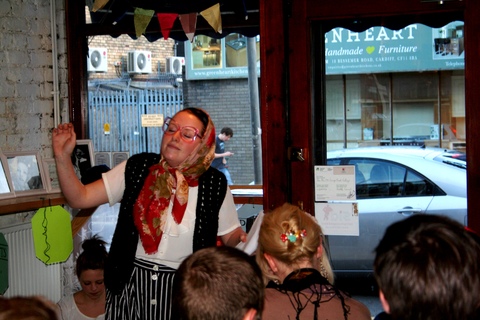 We had one creative workshop with some actors with lots of mad tea-themed improv where we tried out lots of ideas and lots of flavours of tea – for instance Rosehip! We gave our actors different tea personalities and all sorts of crazy situations after forcing cups of tea down their throats and learnt that a rehearsal that is more tea-break than not can be surprisingly constructive.

As the individuality of our actors inspired us before their scripts were even penned, the traditional journey of a play was reversed, giving us some refreshingly fitting and novel portrayals. For us, this was a great learning process. As pre-decided actors figured in the negotiation of the script, we could efficiently produce truly tailored theatre.

The enthusiasm, excitement and caffeine present in the workshop generated a number of scripts which weren’t left brewing for long. We gave our poor actors the scripts the day before and had a rehearsal to block out the scenes, a couple hours on Sunday on the show – and with no prior run through in the actual space we dived right in.

The audience sipped cocktails from teapots as lemon and ginger tea argued over the possibility of infusing with honey as well; Darjeeling, English Breakfast and Green tea started a tea revolution and Mrs Potts bickered with Lady Grey about her love for Earl and hilariously improvised her way through a raffle with a tea cosy on her head. 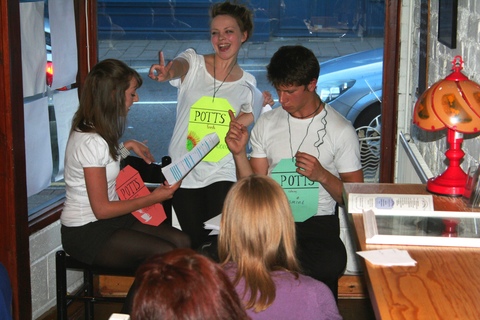 More than anything Tea Party Theatre is about developing ideas, trying things out, learning lots and just having a really great time doing it. Judging by reviews from The Sprout and Buzz magazine we feel there may be a little proof in the pudding. Down the line, we are hoping to do radio spots of our tea parties so people can listen in to the podcasts as well.

We will be having more Tea Party theatre nights coming up after our big show [On] Stage on Saturday 2nd July. We are always on the lookout for actors who might want to be involved in this type of theatre so please drop us an email to introduce yourself at emptypockettheatre@gmail.com and we can pop you on the mailing list for our group workshop auditions we will be holding in the future.

By all means, all theatre shouldn’t make you want a biscuit- but some certainly should.

Disclaimer: we are in no way affiliated with American right wing politics. We are affiliated with chocolate-biscuit-flavored theatrical hilarity. Pictures for illustration purposes only.