Many thanks to all the women who turned up at National Museum Cardiff on Saturday to read aloud from their favourite writings by female authors!  Two groups were able to form, one in the foyer, which caused a great deal of interest from visitors to the museum, and one in the art galleries, which created an amazing visual and aural addition to the artworks.

- just a small selection of the works read.

This was just one of a series of happenings called Flare!, all of which took place at exactly the same time on Saturday.  Set up by women for women to celebrate 100th International Women's Day (March 8th), and built by one-to-one contact, rather than mass electronic mailings, Flare! was also a great success, and many thanks to everyone who gave their time and enthusiasm.

Visit www.flarewales.com to see the network and details of the events. 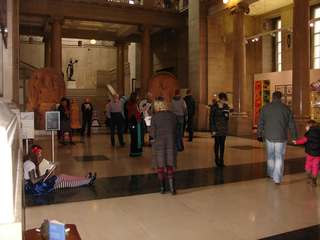