Traverse Theatre in conjunction with the Wales Millennium Centre

Pleading Message from Damien to Barry

‘Just to know who is driving

What a help it would be

So if you want this world of yours

To turn about you

I’m just a singer in a rock and roll band’

Have you heard the one about the Englishman, the Scotsman, the Welshman and the Irishman? I’m With the Band is a new take on this sometimes xenophobic joke. The Band, appropriately called the Union, has had its moments but now it’s in decline and it is ten years since the group’s last major hit. What’s more the VAT man is after them as their manager has never paid any since they formed. Barry (played by Andy Clark) representing Scotland in the blue corner has had enough and wants away. Labelling Barry as a big Joy Division fan was interesting given the plethora of excellent Scottish bands like Travis and Franz Fedinand. 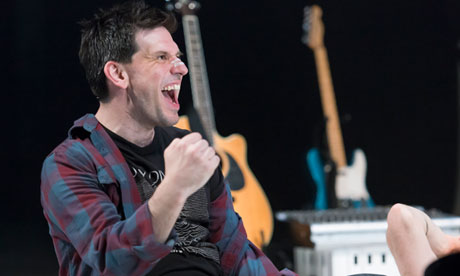 In the red corner stands the bossy Damien (James Hillier) from England who wants to keep the status quo. Patronising and condescending he uses Gruff as the whipping boy. In every group however there has to be a leader but their effectiveness in that role depends on how well received they are by the others in the group.

The Anglo-Scottish relationship is affected by their seconds in the ring. First there’s the self-effacing Gruff (Matthew Bulgo) the half-hearted Welshman.

Gruff’s appearance was reminiscent of a young Clement Freud but he appeared not to have his level of intelligence. He was the typical bass player, last in line for the groupie experience but always drove the group’s van. The lack of self-esteem shown by Gruff may not sit well with the majority of the audiences in Wales.

Aaron (Declan Rodgers) was the other ‘second’ from Northern Ireland who has been through this all before. He has other issues not band related like alcohol abuse and a tempestuous relationship with his girlfriend to worry about.

The show is held together by an evolving list of song titles which mainly feature clichéd political scenarios starting with the number We’re all in this together that well known and sadly misplaced Cameronian phrase.

Next up was the Financial Crisis which was finally the breaking point for Barry. What followed was enjoyable but left some questions unanswered, but then that was the future and who knows what will happen to the four musicians.

This was a somewhat tongue in cheek allegorical look at the prospect of Scottish independence without really getting too serious, but should it have been anyway? Most rock bands by their very nature are ephemeral and cannot truly represent a Union that has existed in its present state since 1927. Nonetheless it’s a cleverly worked and entertaining metaphor that Tim Price has put together.

With a list of reviews as long as Twizzle’s extended arms and much longer than the extent of Pinocchio’s ever lengthening nose, this is a show that needs to be seen rather than believe any of the diverse views available in print. Although, just like the appeal for Scottish independence, the show may not deliver a clear yes vote and as for entertainment, that’s for each individual to decide and the only way to do that is to go to see it.