Joe Corrie (1894–1968) was a poet, miner and playwright. 'The greatest Scots poet since Burns', according to T.S Eliot, and once described as a Welsh Scot, his poems were inspired by the mining communities of West Fife. His drama was compared in some quarters to that of Zola and O'Casey, while rejected on political and stylistic grounds in others. He died in Edinburgh in 1968.

In Time O’Strife was written in 1926 by Corrie, whilst he was on strike himself, to raise funds for the soup kitchens feeding the miners and their starving families. It recounted the remarkable hardship the families encountered through hunger and facing up to the ultimate fact of defeat. Updated by Graham McLaren it has been adapted with the inclusion of some of Corrie’s other works to reflect similar plights that befell the miners and their families in the strike of 1984.

McLaren is currently an associate director at the National Theatre of Scotland. A director and designer, he founded Theatre Babel in 1999, a company dedicated to finding new meaning and vision in myth and classic plays. He adds the dimensions of music and dance to Corrie’s work to provide a piece that could be called musical theatre.

Once the opening numbers are played out the action moves swiftly to establish the dramatic situation, introduce the characters, and give the audience some reason to care about them. 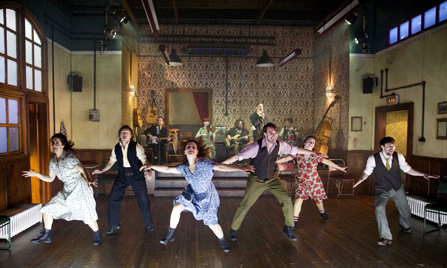 The danger of focusing too much on the political and socio-economic issues to the detriment of an appreciation of what is an excellent production is avoided. The direction transcends the narrative and gets deep into the heart and soul of each of the characters so much so that the audience has a certain empathy with each of them.

At the heart of every drama lies conflict and that was evident in abundance with emotions of passion, despair, love, sadness and grief playing some of the supporting roles.

Musical theatre is one of the most popular forms of stage entertainment today. In Time O’Strife combines the full spectrum of all the arts: words, singing, dancing, and acting which gives its’ audience something for everyone.

All the artistic forces combine to develop a story, mood and theme that is as emotional as the deepest thoughts and feelings of the characters. Whilst the narrative is sometimes either lost in translation or unconvincing, the lyrics and music work together well with the book adaptation for dramatic purposes.

The use of music in the play heightens the emotions and reinforces the dramatic actions evoking atmosphere and mood in ways that words alone sometimes cannot. The musical direction is masterfully arranged by Michael John McCarthy a Cork born Glasgow-based composer, musician and songwriter. He too is normally playing guitar and on vocals in the play but Gav Prentice, another Glasgow-based musician came over the wall to replace him last night. It must be take a worm for a walk week for Jonny Scott was also missing being replaced for the night by Louis Linklater Abbott, originally a drummer who now spends most of his time singing with the band Admiral Fallow.

The production was lucky to have such a talented and well-respected Choreographer and Movement Director in Imogen Knight. It is clearly evident in the movement and emotional state of the performers that she has worked closely with the director, the actors and the other creative team members. 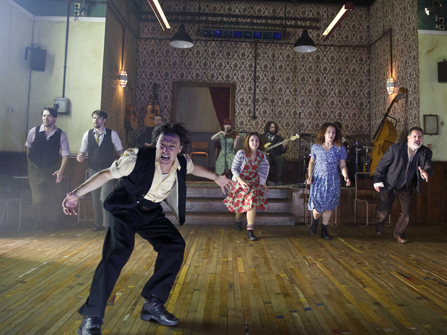 Ultimately it is a well-constructed drama, with evocative music and dance that strikes a chord in human emotions.

The play closes with a powerful rendition of ‘Keep the Red Flag Flying’ that only creates a feeling of misplaced defiance albeit a more fitting ending could have echoed the words of Max Boyce:

“Will you move away now the hope of youth’s been slain, or does the hawthorn by the pit head still blossom in the rain?”

In Time O’Strife  - The Workbook

The workbook is a fascinating and informative insight that is essential viewing for all those associated with theatrical art.

These pages document the development, rehearsal and production process of the National Theatre of Scotland’s In Time O’ Strife, first performed in Pathhead Hall, Kirkcaldy in October 2013.

The workbook is created as a reference for people who are interested in how a piece of theatre is created or perhaps making their own work in school or college.

Materials are arranged in reverse chronological order or you can explore content related to different areas of theatre craft.

Clicking on each team member’s job roll will take you to posts related to their work.

WELSH WRITERS - @BBCCymruWales , @NTWtweets and BBC Writersroom Wales are joining forces to search for the next Wales Writer in Residence. Opens soon on Monday 10th Feb. Deadline 11th May. Find out more here.

Have a look at this! #HailCremation is coming to @NewbridgeMemo in March, and we're loving hearing @RobertDowneyJr talking about Dr William Price! For tickets, see the link in @jontreg's tweet below . Rhian https://twitter.com/jontreg/status/1221015445735706625 …

Have a look at this! #HailCremation is coming to @NewbridgeMemo in March, and we're loving hearing @RobertDowneyJr talking about Dr William Price! For tickets, see the link in @jontreg's tweet below