INDIE SCENT: EARFOOD FOR THE MASSES 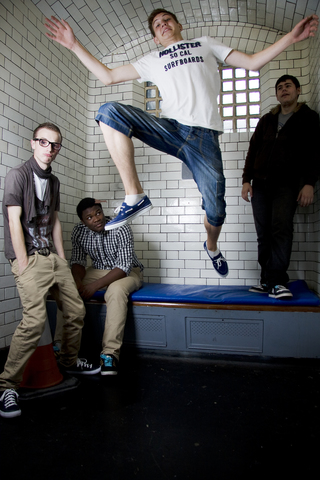 A rather astute social historian once told us that 'music brings the people together' before qualifying this statement with the observation that the medium mixes 'The bourgeoisie with the rebels.' Mater ial et al (i)

Music has the overwhelming power to unite,  an entire generation can assemble at the drop of a high hat, the main reason why legislation was brought in to regulate and criminalise mass public gatherings.

These are socially turbulent times, and there are rumblings of discontent growing within the music industry in opposition to the tyranny of oppressed people force fed a staple diet of Cowell produced insipid gruel. Yet we beg for more as if in a Dickensian workhouse.

Leading the charge is ‘Indie Scent’ a Band from South Wales, I met with Indie's lead guitarist Euan Jones following the band's photoshoot for their forthcoming album eponymously titled Indie-Scent: Decent Night Out?

The band have acquired a huge following in a relatively short amount of time and it seems that everywhere you look Indie Scent merchandise surrounds: bags, tees, key rings, and rumoured action figures in the making, perhaps they are in danger of becoming objects of the commercialism that they claim to despise so much. Euan disagrees, These skilled artisans have learned their craft on the circuit, doing gigs in small unforgiving dark, dank and stank student venues. They 'have learnt their trade'  rather than benefitting from a fast track to fame via talent shows, a guaranteed christmas hit ballad and a shortlived extension to the mandatory 15 minutes.

Their mission is simple: a noble quest to take back the music, a daring act of reclamation - redistributing it to the ailing masses, who have been cruelly starved of decent ear food for far too long.