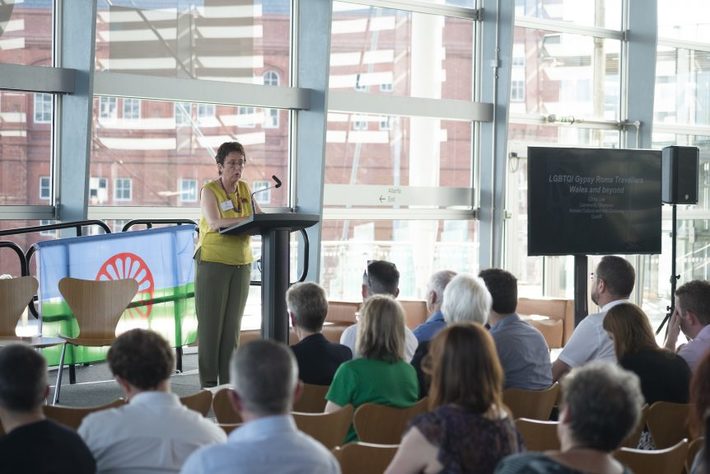 The Romani Cultural & Arts Company was proud to hold the first Gypsy, Roma & Traveller (GRT) LGBTQI International Conference in the UK on July 4th 2019. The event was hosted by the Senedd – National Assembly of Wales and featured an international selection of speakers including activists, academics, artists and community champions who focused on the current and historic experience of GRT LGBTQI people and the future possibilities for improving equality and opportunity across our communities. The Romani Cultural and Arts Company gratefully acknowledge the support of Welsh Government in carrying out this important event.

This event is one of many that RCAC is currently co-ordinating. The RCAC is a GRT founded and run organisation and we were very proud and excited to be able to give a ‘minority within a minority’ a platform and a voice with this GRT LGBTQI conference. The conference presented a unique opportunity to participate in discussion with an international panel of inspiring speakers and to learn about their research and their professional and personal experiences.

It was important for us to host the event in a Government building in order to represent the action of taking this important issue directly to the seat of power where decisions are made that can effect change. We now hope that the Government will look more carefully at this particular intersection within our communities to assess the kind of support currently available and determine what more can be achieved. It was a privilege for all involved to be surrounded by other LGBTQI members of the GRT community and to be able to occupy a high profile professional platform to deliver this important conference.

This exciting event took place in the context of the Romani Cultural & Arts Company’s ongoing programme of increasing visibility, opportunity and equality for all members of GRT communities across Wales and beyond. The aim of this unique RCAC venture was to showcase emerging international voices within the field of GRT LGBTQI awareness and to facilitate the development of dialogue across communities about the ways in which articulations and negotiations of difference continue to inform the lives of individuals within GRT and LGBTQI communities today.

The event shared aspects of the intersectional experiences of GRT LGBTQI peoples with the general public that have not been openly discussed in the UK previously. It created visibility and an awareness of human experiences that have widely been ignored, suppressed and denied. Such omission has been common throughout mainstream society, the LGBTQI movement itself and the wider GRT community. The very act of refusing to deny the existence of GRT LGBTQI peoples is a starting point for beginning a dialogue that can eliminate the amplification of violence felt at the intersection of antigypsyism and homophobia. Acknowledging the spaces that these identity positions occupy and how they overlap can lead to new synergies that radiate beyond the intersection to help build a more cohesive and tolerant society.

A new approach to the current situation is certainly needed. In 2008, the National Institute of Mental Health drew attention to “the high rates of mental illness and suicide amongst Gypsy and Traveller individuals in the UK who identify as LGBTQI” (NIMH, 2003 Biddle et al 2008). Fear of the repercussions of revealing one’s sexuality to family and community within mainstream society undoubtedly still exists but the fear of violent reactions to such revelations within tightly knit and widely marginalised GRT communities is often more acute. Ostracism from their community can be particularly difficult for GRT LGBTQI individuals who may often have nowhere else to go. The harsh realities and the wider implications of the points outlined above were explored throughout the conference by the speakers and during the concluding open forum.