My Birthday trip to Merthyr to see Mother!

So as you are all probably not aware I got another year older over the weekend. Why should you care about that? No reason at all I'm just milking it a bit. (I'm still accepting birthday presents if you're interested.)

To kick off this years celebrations I finished work, got changed and jumped on a train to Merthyr to see Mother Courage. When I got on the train was packed, standing room only and if I'm honest this filled me with a sense of dread anticipating being squashed like a sardine all the way to Merthyr. Thankfully the train cleared out a bit at Llandaf meaning I was able to grab a seat, so if you are heading up on a train don't panic it's all going to be okay. The next big panic was my lack of forward thinking, I had forgotten to write down the location of the show but luckily for me there was a beautiful poster on the train with the venue written on it. I was fully prepared to jump in a taxi on arrival at the station but as the train pulled in to the station I spotted Merthyr Labour club and it was all of 5 minutes walk from the station. Possibly the easiest venue to find and commute to for a site specific NTW show.

I arrived pretty early mainly from previous experience of travelling to the venues but as this had been so easy I now had about an hour to kill before the show. Well seeing as it was my Birthday long weekend I headed to the bar, kicked back and relaxed. I really liked the Labour club as a venue as the locals were in and enjoying it, the bar lady was super apologetic that if I was taking a drink it to the performance space it would have to be in a plastic glass and explained it wasn't her choice if it was up to her I could have glass. It really set the show up well. So I sat down and enjoyed a pint or two before the show. I even have a photo as proof, see. 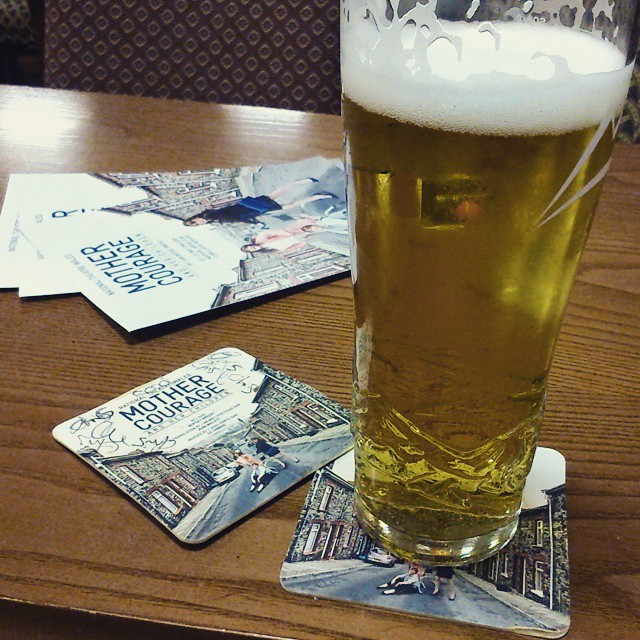 So time for the show, as we enter the function room karaoke is in full swing. I came to the show alone so sat myself down by a fellow lonesome theatre goer who was super chatty and friendly we enjoyed a few songs singing along in our seats. We had a good party vibe going and then Rhian Morgan got on the mic and the mood changed.

We were plunged into the middle of a war with Mother Courage, her children and her wagon. I won't give much plot away but I will say people were sucked in and some locals had a particularly good time with everyone super close to the action. We had an interval and came back to see how this war thing was going, oh I should probably mention Mother Courage and her children have well and truly got mixed up in the middle of the whole thing so to come back into a full on disco in the club was a bit of a surprise. We all had a dance and settled down for the second half. It was a pretty heart breaking part of the show that ends with.... something special again I won't spoil it for you.

My least favourite thing was that I had to dash for the train pretty quickly after the show no time to hang around to chat with the awesome cast, they really were excellent. Rhian Morgan is fast becoming one of my favourite actresses she has been in a string of really enjoyable shows lately, Nicola Reynolds was also super strong even when she was being supper manipulative I found myself egging her on, Ri Richards I could watch for hours. Honestly the cast was stella so go and see the show while you can, but please don't give the bar lady a hard time about serving your pint in a plastic glass, if it was up to her it would be glass.

Awesome post Brent! Glad your birthday celebrations got off to a Courageous start ;)