My first couple days in Tokyo

So I am writing this blog after realising that no matter how much I toss and turn to get back to sleep, jet lag has got me and my body clock isn't willing to let me be- think tomorrow will be difficult, bring on the coffee!

I arrived on Sunday having left a snowy London Heathrow.  It wasn't as warm as I had hoped, didn't have much joy with sim card at the airport and then thought I had taken the wrong train from the airport to the apartments.  But actually the train was right and I managed to get to the apartments but this was due to some amazing assistance from a guy I asked for directions from.  He not only advised me that I was on the right train, he brought me all the way to where we are staying and wanted to pay for the cab.  How often would that happen in the UK?

So although Sunday was officially recovery day, I started doing some detective work.  After crashing for a while I decided to have a wonder around the local vicinity to figure out where, what and how.

So far I have seen signs for a community centre, visited local cafes and found a panda chilling in the local restaurant.  I also accidentally found the New National Theatre and was very pleased with the fruits of my exploration.

Monday was taken up mainly with meeting the Producing team at New National Theatre and also my assistant, Nobuo and his wife, my translator, Akiko.  It was a great meeting and there was much discussed including the familiar Assembly questions of:

What is the space/ world?

Who are the audience?

The rules of this world?

How do we bring a diverse group of people to the theatre show and enable a real sense of discourse?

But some slightly more bespoke questions were posed:

Is the formality and submissive nature that is predominant amongst people here, just a top layer of something more interesting?

Can we be political or create dialogue which may veer into politics? How far can this be pushed?

Will be adding more thoughts as I go about my business and research some of these things and just ponder, question and try to engage people in my research over the coming few days.  Also want to get see some cherry blossom – saw John’s pics and they look amazing!

I went to the famous Heichiko dog statue to meet an old friend who has been living in Japan for the last 8/9 years.  It was great to see Ade and also that he hadn't changed much, other then just being a fluent Japanese speaker! We went to a Izakaya bar to grab some food.  However I think the day and jet lag caught up with me and I felt my bed calling.  The upcoming day will be an interesting, as I start to really get about and figure out what this Assembly will become! 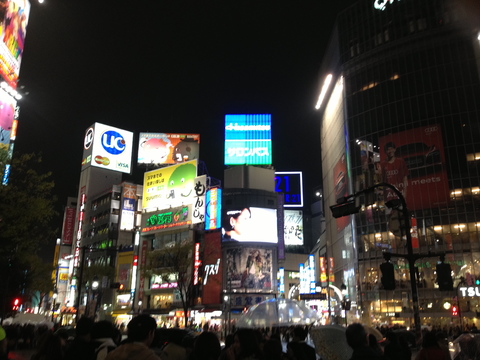 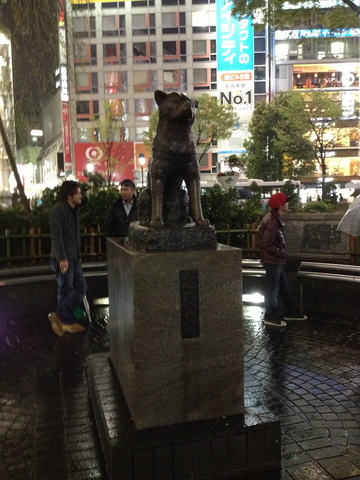 Shibuya and it's lights - this picture doesn't do it justice - quite something else!

The famous Heichiko Dog statue, a meeting point for pretty much everyone!

Heichiko used to wait for his master at the station every evening when he was due to come home.  One day his master didn't come home but Heichiko continued to wait every night for over a decade! There is nothing more profound that the loyalty of a dog - Gelert, from Beddgelert, protecting his master's baby (although that didn't end well for Gelert or his master when he found out what he had done!) or Bobby of Greyfriars in Edinburgh who guarded his masters grave for 14 years.  Our dog would wait for a bit....until someone else gave her a biscuit and then that's where the loyalty stops!!!