Oklahoma! the musical is mainstream defined, or is it? by Response Critic Leslie R.Herman Jones

Oklahoma! the musical is ‘mainstream’ defined, or is it? The UK National Tour, a Music & Lyrics and Royal & Derngate Northampton co-production of Oklahoma! at Wales Millennium Centre this July is classified as 'mainstream' theatre. It has mass appeal; it packs houses, and it leaves audiences feelin’ alright. But is it mainstream? 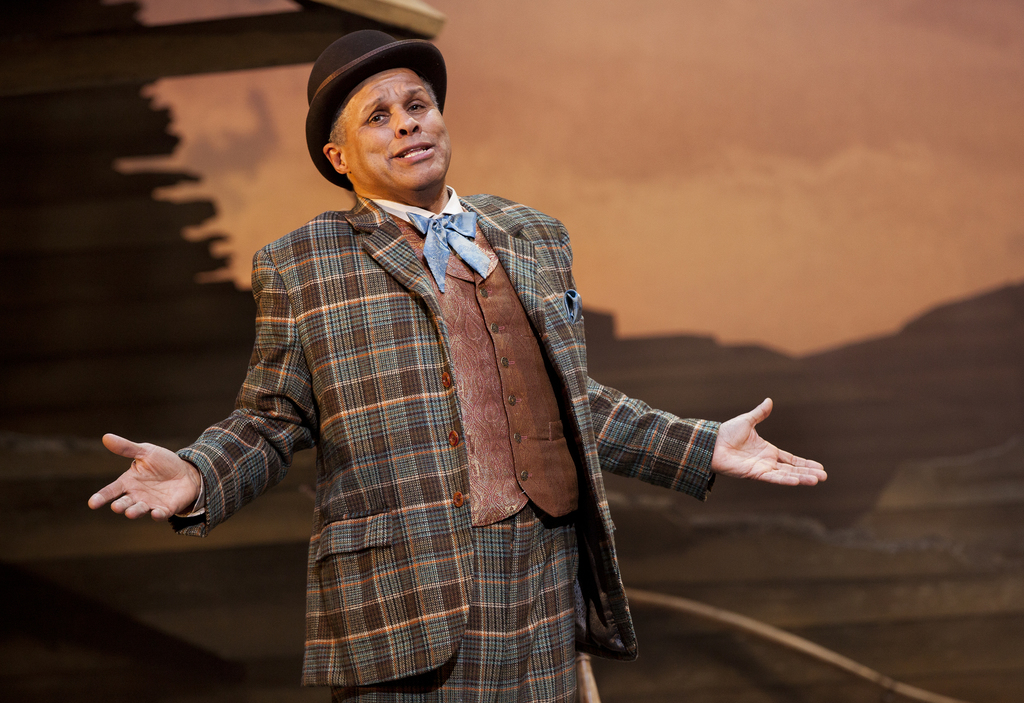 In the 1600s, mainstream described the ‘prevailing current of a river’; the first recorded use of its meaning as ‘prevailing taste or opinion’ was in 1831. Mainstream describes what's viewed by most people in a society as "normal"....  Something that's mainstream is conventional, or the usual, ordinary way that most people do things — nothing too weird or outlandish. http://www.vocabulary.com/dictionary/mainstream

In terms of culture, mainstream refers to a ‘current of thought that is presently widespread. It includes all popular culture and media culture, typically disseminated by mass media. The 'West End' is a common term for mainstream professional theatre.’ So how does a 1940’s musical remain mainstream in 2015? I’d say, mainly because of its musical score.

The story is thin and, frankly, dumb.  But the music!! From the first note of the Overture and into Curly’s (Ashley Day) marvellous Oh, What a Beautiful Mornin’ through to the final ensemble signature song, Oklahoma, and the last note of the Finale, the Rogers and Hammerstein musical transported me, took me on a ride back in time, if not quite back as far as turn-of-the-20th-century Oklahoma, USA, where and when the story was set, but fittingly and quite thrillingly back to ‘Theatre land’ USA in the 1940s, when this groundbreaking musical was written and produced. It is a classic, it raised the bar higher and set the standard at that height for musicals of its time, and it still endures 72 years later, mainly because of the music.

So when the music started, and the first clever theatrical effect carried us through the scrim with a swirl and into the world of make believe, I was instantly uplifted! I just love it when live music and gloriously-nostalgic tunes have that effect!  And for a marvellous mainstream moment, I felt so happy!

Happiness was thwarted seconds later, when I thought that the music was a recording and not live. The orchestra pit was not visible from my seat in the auditorium, but I was reassured when I saw the conductor raise his arm, which allowed me to settle back and enjoy the show. (Rather than an orchestra, though, the programme notes refer to this live group as a ‘band’, a pared-down version of the golden days of musical theatre when a full blown orchestra would do just that: blow the audiences out of their seats; blow our minds with their power, glory and majestic aural production. And in place of a ‘conductor’ the notes speak of a ‘musical director/keyboards’ (Ben Atkinson). Was it Atkinson who was conducting, and who’s arm I’d seen? Also noted that there is a credit for ‘orchestral reduction arranger (Steven Edis).... Live orchestration really has been pared down! Well, at least it was live).

Unorthodox as it may seem to credit to those on the production team responsible for the programme, I’m doing it. I don’t usually have time to read a programme through pre-show, but this programme is jam-packed with valuable and interesting information, in particular Nick Smurthwaite’s interview with Director Rachel Kavanaugh and Choreographer Drew McOnie. It has served me well as a critic, and will be a worthwhile keepsake. Back to the show.

The songs and the music, song after song, tell the story and carry this show: The Surrey with the Fringe on Top; Ado Annie’s (Lucy May Barker) anything-but-coy confessional, I Cain’t Say No!; Laurey’s (Charlotte Wakefield) and Curly’s People Will Say We’re in Love; and tremendous kudos for Jud Fry’s (Nic Greenshields) Lonely Room. What a voice! And what a powerful moment in the show. His physical and vocal size and strength carried, covered the entire space, reached out and touched on many levels, and added another musical dimension to the show.

Accents were accentuated, to make sure we noticed, to be certain we knew we weren’t in Kaaaadiff anymore. Perhaps they were taken too far; I was too aware of Aunt Eller (Belinda Lang) overdoing her consonants. Lang looked the part, and though small in stature, played it real large; or for example, when Will Parker (played by understudy, Simon Anthony) sang out in Kansas City, ‘That’s about as furrr as he could go’.

But Curly! Curly could do no wrong! A winning smile, seasoned performance, and saucy swagger, Ashley Day’s recipe for the character, with just the right ingredients, kept me sated. On the whole, the men in this production stole the show. Wakefield’s Laurey was a bit too abrasive and aggressive, showing little nuanced vulnerability which, while difficult to achieve in a production of this scale, is really needed to make us like her. 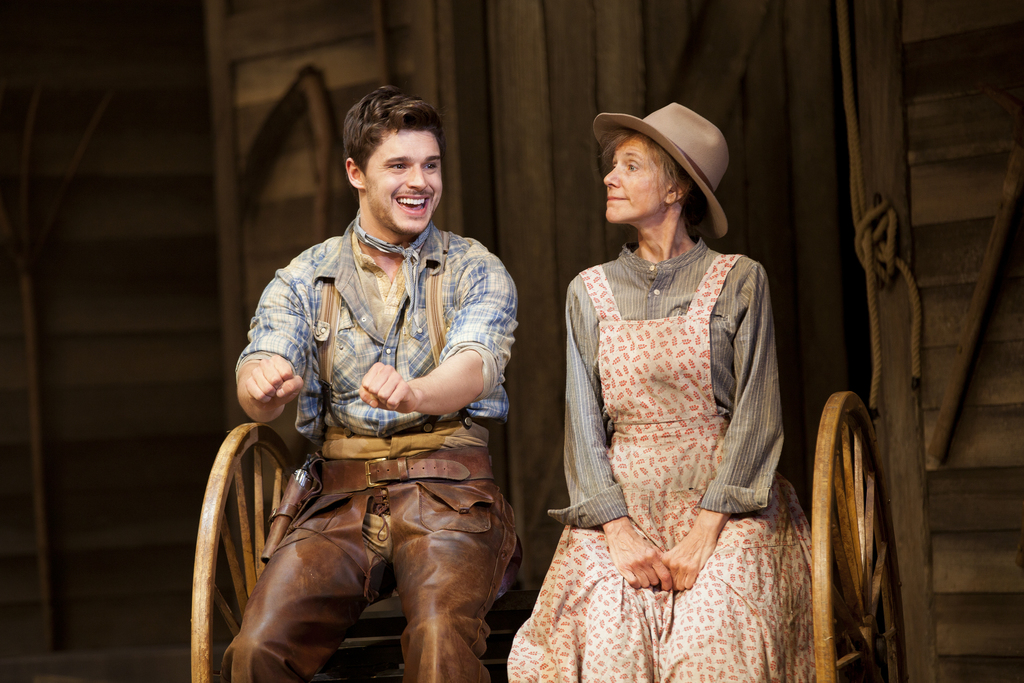 Ashley Day as Curly and Belinda Lang as Aunt Eller in the National  tour of OKLAHOMA! credit Pamela Raith

Act II falls flat until the musical numbers kick in again, and once they did, the show was back on track. While slick and included a clever use of props, the choreography didn’t WOW me. And the staging in general was problematic, with some challenging sight lines from my seat in Level 1 mid stalls, by virtue of the fact that quite a lot of the action and dialogue was on the porch and behind the porch’s upstage pillar.

The final word goes to Gary Wilmot as the peddler, Ali Hakim. His character brought humour, intrigue and divisiveness to the story, which enhanced the production. It’s always exciting to see a celebrity in one's local theatre; I credit Wilmot with not stealing the show.

I had a great night out and I applaud the talent and the virtuosity of main stage theatre. While it moves many body parts, Oklahoma! is not going to move your mental muscles. And, as for being mainstream, with so much to choose from and such varied taste amongst audiences, it remains a moot point. The choice is yours.