Opening scene from Sorrow for my Sons. 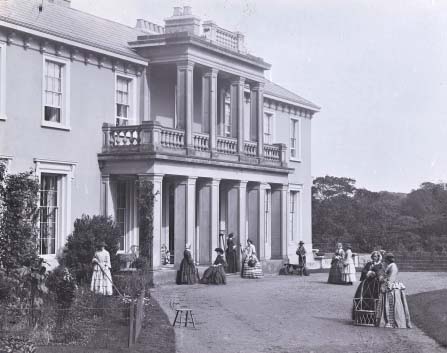 I thought it might be of interest to add the opening scene from Sorrow for my Sons, the one-act play I intend  to stage  to publicize the Graig Du Theatre Players.The premise of the play, about the mysterious death of W.D. Llewelyn at Penllergare in 1893, has been alluded to in my profile of the group.

Labourer:  Us five were talking by the quarry bridge the other day. These woods, say I at Penllergare,have mastery over mystery. There was some bloody muttering from them, I can tell you. They were a little slow in getting my meaning. Who could blame them after that day in August? Them who ask any questions are never told any lies. I still cannot see him taking that hammer gun with him. Stranger things have happened;mind. He was his usual self when he returned. For years, the gun had remained idle and they swallowed that at the inquest. I never believed it. William was going to marry Dynevor's eldest girl in a few weeks. That did not make any sense to me. What was he doing out shooting when he was supposed to meet the girl that afternoon? I am not questioning Sir John and the other gentry at the inquest because they are better men than I am. Willie Llewelyn was good with the old bat and ball. One thing he could not boast of was that he had not bowled out Dr. W.G.Grace like his old man had.I was with two search parties throughout that day. The wife says that our sunflower was turned to the east when I left, then it had turned full circle to the west when we had found the poor bugger. William and Sir John were about the same stamp. I still disbelieve what I had seen. All I want is for you to understand. I was not the only one who noticed the small entry wound on his waistcoat, just below his heart, blackened around the edges. The poor light did not deceive my eyes. How would it be possible for him to hold the gun, with its length, to his chest with his height? I am not having that. Why was he lying on the ground as he was found? The other thing, though I could not swear on this, is that the gun was lying two feet away, with the muzzle facing away from him. . .

I will e-mail copies of the play to anyone who is interested in reading it.