Parallel Lines: Day before the tech

With the tech team in the theatre rigging the lights and building the set the cast are running lines and blocking with Director, Catherine, and Stage Manager, Emily. This is the final opportunity before we tech in the theatre to confirm which word they stand on or which angle the chair should be placed at. The cast are in good spirits with the ability to have fun with the lines now which Gareth (playing Simon) informs me is a great position to be in as no- one will be thrown during a show if someone delivers a line slightly differently and enables the performance to remain fresh. A speed run of lines with blocking came in at 1 hour 4 minutes which was beneficial as well as entertaining. The current running time of the show is an hour and a half.

The journey the cast have taken from initial exploration rehearsals of space, physicality and character to the current performances is very exciting to have been a part of. The production team were bought to tears (in a good way!) during the Saturday afternoon run (not because of the Rugby!) which I think proves what an incredible piece of drama this is. Even knowing the script inside out they were moved by the performances. It is a simply a 'must see'! Tickets are available from Chapter box office for the Cardiff leg of the tour. Please check the Dirty Protest website for tour information. 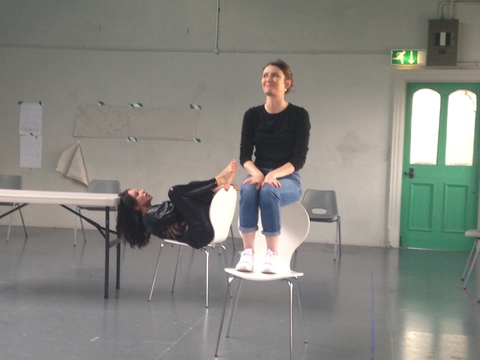 I can't wait to see the full production come together in the tech/ dress run with the set and lights. The soundtrack for the show is great and I hope a CD will be produced! This is a really exciting production to have been a part of and I am so grateful to NtwTEAM for the opportunity to be 'Assistant Director'.