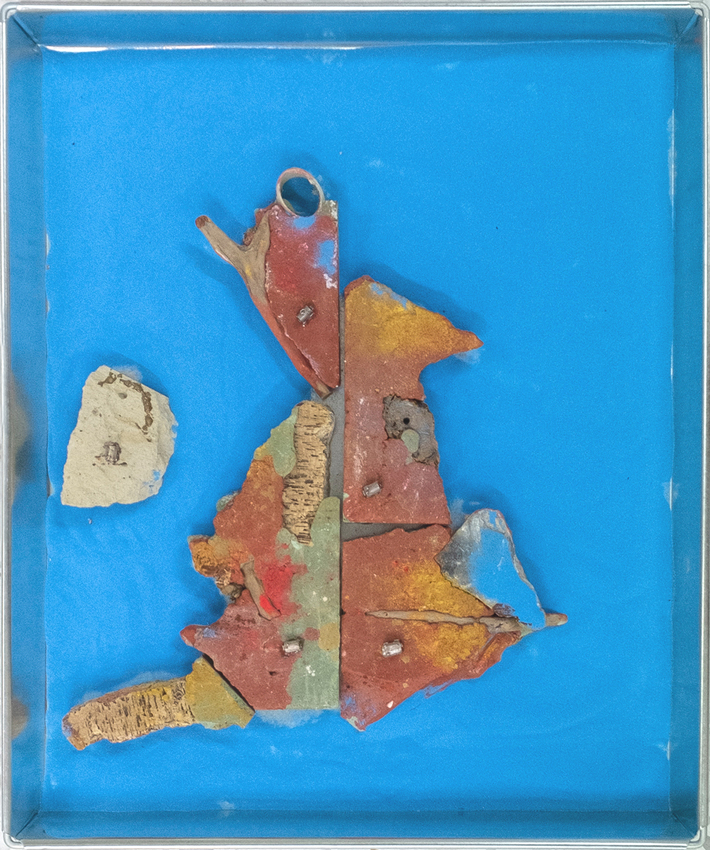 “In these works I examine the sense of double belonging that has continually structured Romani identity and unity—that of being ‘home’ and at the same time being ‘other’. As Roma we belong to our community and at the same time we belong to the landscape of the territories and countries that we live in. I have been looking at this particular sensibility through the ﬁlter of the Roma diaspora and the varieties of different countries of origin that have beneﬁtted from our cultural inﬂuence. Working with modern population maps and distinctive decorative metal charms I signify how Roma have travelled and crossed continents using traditional crafts or occupations. By displaying these works on the ground, and employing altered and subverted building materials associated with road making and construction (well established Traveller ways of earning a living), I reimagine the past, focus on the present, and look towards the future to challenge mainstream culture’s view of our identity.” Dan Turner

Dan Turner’s Patteran Series considers a pervasive element of Romani identities—that of how movement and travel have influenced Gypsy, Roma and Traveller lives and their relations with settled populations. Many Romani groups continue to exist outside of societies that they have been surrounded by for many generations and any resulting sense of dislocation is further shaped by cultural narratives of life on the outskirts of society. Along with shared histories of movement these qualities have equipped Roma with the facility to resist ongoing economic and legislative pressure towards assimilation and expulsion but not of course without serious hardship and great oppression.

A nomadic history has been passed down through generations to today’s Roma and persists to inform the Romani worldview—a worldview which has set Gypsy, Roma and Traveller groups apart from, and often in opposition to society at large. This combination of elements has resulted in a sensibility through which Gypsy, Roma and Traveller groups maintain an inherent understanding of the vagaries and contingencies of life on the move. The collective experience of life at the edge of state control has resulted in the development of Roma’s acute understanding of the value of the makeshift and its associated qualities of movement, transition and adaptability. This is apparent not least in Gypsy, Roma and Traveller’s integration of artistic practice within everyday life. The reasoning behind this phenomenon becomes clearer when we consider that, historically, all artefacts accompanying a nomadic community on their travels were required to serve multiple purposes. The resulting need to combine acculturation with artistic nourishment, practicality and portability has consequently played an important role the development of Gypsy visuality and the Romani aesthetic—resulting in a legacy of nomadism which means that form and function remain intimately and symbolically connected within Gypsy, Roma and Traveller cultures. Dr Daniel Baker