On Friday and Saturday I had a great time at PlayARK's festival of Games and Talks. Friday was the 'Talks' part and Saturday the 'Games'.

The Talks included thoughts and tales from a brilliant variety of people, covering everything from interactive pottery to participatory charity radio in Sweden. There were lots of thoughts throughout the day, and loads of interesting examples to share but I won't just regurgitate them all in the form of a blog.

The theme of the day, broadly, was 'playfulness' but this took so many interesting and creative forms, from storytelling to the more literal gaming side and what playfulness and game theory teaches us about the rest of the world. Here are a few of the highlights:

My favourite example of collaborative storytelling was Musikhjälpen. This is a charity radio event in Sweden, during which three well-known presenters broadcast from a glass box in a public square for several days. They can sleep and eat, but not leave the box. Members of the public donate money online to help choose the playlist, and people can volunteer to go into the box and show off their party piece/special skill/something funny. The radio show is telling its own story online, on the radio and through videos that are shared:

(This is a pretty long video but it will give you a good idea of what's going on).

Artist Ingrid Murphy talked to us about her innovative and brilliant pottery. She looks at traditional sculptures and ceramics, and remixes them for the 21st century world. Some of them are just quirky and great within themselves, like traditional ceramic sculpted women modified to hold protest banners, appear in digital photographs, etc. Others are works of genius existing across multiple platforms. Some of Ingrid's sculptures feature a QR code which takes you to information about the piece, or an imagined history. She has also created, using 3D scanning technology, models of herself which exist in Geocaches around the world and can be tracked when they are found or relocated. Such a creative way to think about visual art in its future incarnations.

Nick Fortugno from New York-based Come Out and Play talked about gamifying education. This was a fascinating talk, live via Google Hangout from his base in New York City, in which he gave us new ways to think about education. School, tests and the like are actually quite a lot like games with two clear differences: it's not (always) fun, and you get penalised for failing.

Now, I'm just as much for teaching young people about how to deal with failure as the next person, but Nick's proposed alternative was also brilliant. He suggested that by using technology you can do away with the 'grades' system of school years and have every child work at their own pace and 'level up' when they're ready. If they fail at something it's like Mario falling down a hole. He goes a bit shiny and re-starts from the last checkpoint. It then doesn't really matter at what pace you level up - some children will fly through the educational levels and need more challenges; others may spend a year on the first level but the crucial thing is that doesn't matter.

It's also clear that we are born to play. Toddlers learn by playing all the time - it's not uncommon to see an 18-month old child spend hours at a time learning how to fit shapes into the right holes, or place coloured rings in a particular order but we lose the fun at school. Game theory can bring this back.

This is a massive topic which we're just scratching the surface of, but I'd love to see this sort of idea taken on by educators and used to make school better for everyone.

On, then, to the games day. As you may remember from my Hide & Seek Weekender blog post, I quite like playing games. The more creative and the newer the better.

Saturday's Games day by PlayARK was a good opportunity to find out about some recently-created playful ideas, and play some new games. In the week leading up to the festival, PlayARK ran a hack week with some creative people. Out of that came a handful of projects, my favourite of which is probably Playdance. I've borrowed a couple of their Vines to demonstrate how the project works. In short, you film either your top half or bottom half dancing, and then use the website to swap around with other people's tops and bottoms to create a sort of dancing flip book. The team were demonstrating this with two big TVs on Saturday, but they're planning to get the site set so you can choose different pairs and play away.

I also really liked a new game by Glitchnap called Zumbie: Blind Rage, in which you need to shoot oncoming zombies with a Playstation Move controller. The only catch is you're blindfolded, so you need your friends to watch the screen and shout instructions. After a fairly shoddy first attempt, I somehow managed to get the highest score of the day, mostly due to excellent instructions from some bystanders.

Here's a picture of the gameplay: 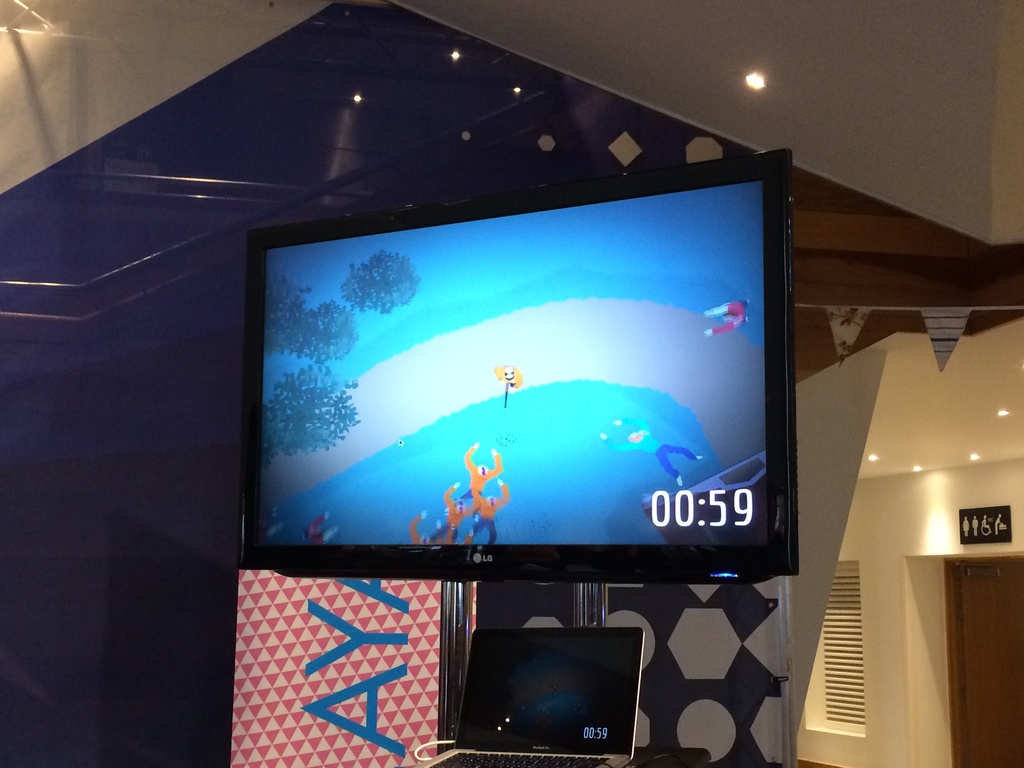 And here I am, blindfolded, ready to start shooting zombies: 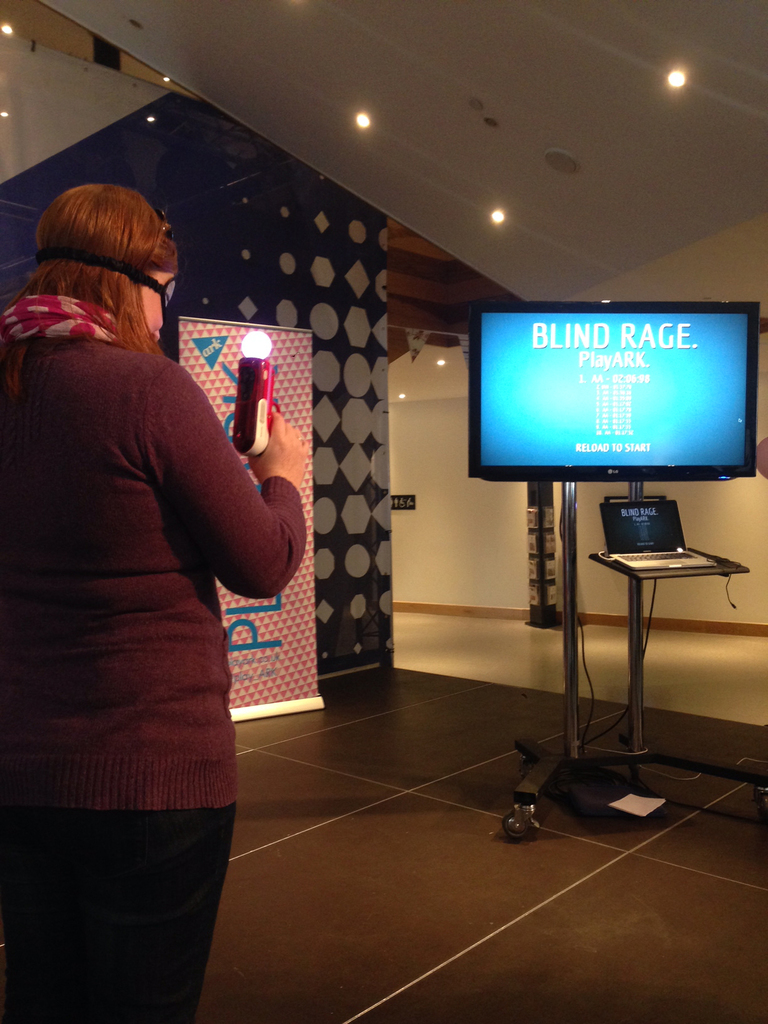 Also using Playstation Move controllers is a game by Die Gute Fabrik called Johann Sebastian Joust. This is a screenless game in which 8 players have a controller each, lit up in 8 different colours. If you move too quickly, or your controller is hit it turns red and you're out. The winner is the last person with a lit-up controller. Obviously the bulk of the game is spent trying to knock other people's controllers without moving your own too quickly. I played this last year in London and loved it, and I hope they release a commercial version at some point. What a great thing to do at your family Christmas party! 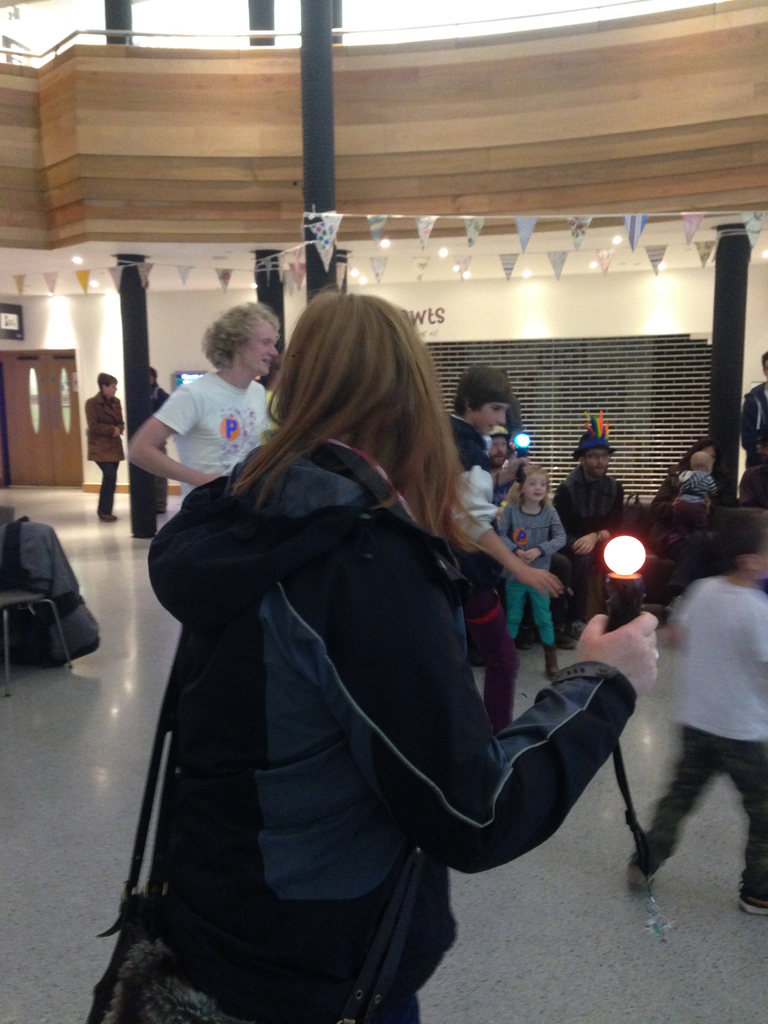 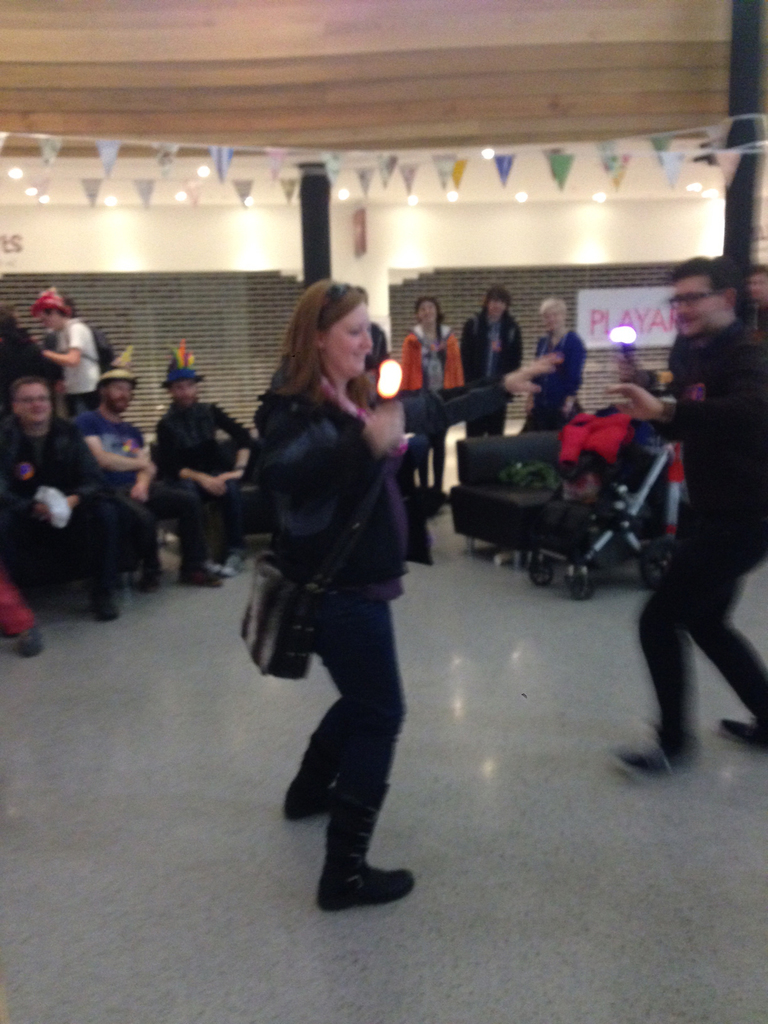 I feel like I should end with some profound thought about game theory and playfulness but I'm afraid I don't seem to have one at this point. Perhaps it is that a few years ago it turned out that grans really get on with the Wii, so perhaps more creative gaming is ready to be introduced at Christmas.

On the other hand perhaps it's that we should all start thinking a bit more playfully. How do you approach a challenge? How do you start a project? How do you work out and measure achievements? It's all a game really, so why not make it feel fun like one...

* Thanks to Carrie for most of the photos.