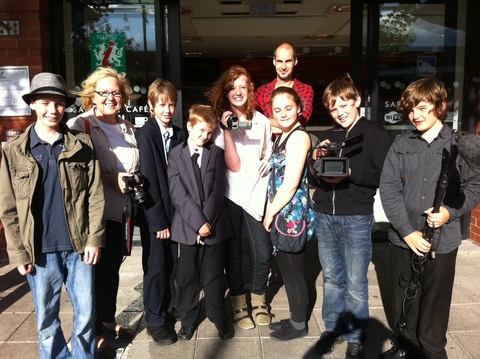 Friday 4th September saw me make my second visit to Prestatyn and work with the Prestatyn Film Team, who are supported by the wonderful Jan Miller and Ryan Hall.

The brief was to make a film over a two day period.

The group is made up of around ten young people from the Prestatyn area. These young people have a genuine passion for making films and it is a REAL pleasure for me to help them in any way I can. They had written a script 'Unreel". A short thriller in which the whole team had a role.

We shot the film using in the Scala Arts Center as a location which lead to some creative thinking by the team. They had to dress the location to look like a flat, which had its problems in terms of shooting but these problems lead to more creative thinking.

What I wanted to group to get out of the two days most was the idea that planning and preparation are key to making your film a success and that having the ability to think on your feet is a great advantage.

Incredibly, and a credit to the group, we managed to shoot everything on the first day so the second day was about editing. We put the footage on about eight computers and all of the young people had the chance to edit their own versions using Final Cut Express. Some of the group suggested that they would be more comfortable editing with iMovie but with a little encouragement from myself and Jan everyone cut using FCE.

Amazingly there where about four or five ,almost, finished films before the end of the second day. And it was an interesting process to see how each person had interpreted the footage in a different way and told the story from a different angle. This was good for the group as they realised that the editing process has the potential to be as creative as any other stage in film making.

I cant wait the see the final films and if I am fortunate to be invited back I look forward to helping the Film Team taking their film making to the next level.