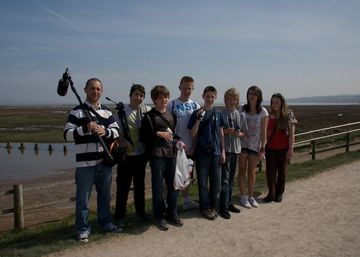 We set ourselves the task of making a film in 36 hours and we almost completed it. I boarded the trian for Prestatyn at the 5.10 thinking about the two days ahead. I'd been prepping for the workshops but couldn't be too specific because, as is often the case, individuals in the group possessed different skills.

From speaking to the (genuinely lovely) Jan Miller, who runs the group, on the phone I thought the best approach was to try to show the young people some basic camera techniques, move from iMovie to Final Cut, the structure of a story, the importance of sound which is often overlooked and the importance of pre-production.

I arrived at The Scala, and was taken to media suite, where we would be working by Kevin. They have some good equipment here, but no sound equipment except for an on board mic, luckily I'd brought my own.

I meet with the young people, who are a great bunch (they even wait at the traffic lights). Some of them showed me some of their films and animations, which were good but also made me feel happy as it was obvious that these kids where already passionate about making film.

We began to write our storyboard - adding shot description, audio and action.

Time got away from us and before we knew it it was 12.30 and we where only half way through, but still had to shoot and edit so we decided to shoot what we had and work on the rest later (not the best technique but time wait for no man).

We set off to the beach to shoot our horror film. The weather caught us unprepared, we had little previsions, jumper and jackets, sun cream and it turned out to be in the high 20's.

We shoot the first few scenes and had to call it a day at around 3.30 because there was no rest bite from the heat. Also I have a mysterious swelling in both ankles at the moment and EVERY step is agony so I was glad to finish

To my pleasant surprise everyone still wanted to continue back at the Scala where we looked at the rushes. I gave the young people a crash course in Final Cut Express, which they learned straight away. This also helped them understand why we shot the dialogue scenes from different angles, and why sound was important.

The next day, the weather was the same (great for continuity) and we where more prepared for the day ahead. This time we caught a taxi to the location and began shooting. During the previous night Jack, one of the young people had finished the storyboard and was the director on the second day.

We shot as much as we can but where unable to shoot in every location, it was the Easter break and parts of the beach where packed.

We went back to the Scala and looked at the days rushes and began to put a rough edit together, with the view to see what the group would have to pickup over the next week or so.

All in all it was a successful few days. I think the young people got a lot out of it. They now realise that there is a lot more to film making and preparation is a key component.

I'll defiantly be keeping in touch with the group and hopefully will be able to get involved in some of their future projects.

Comment by Jan Miller on April 26, 2011 at 12:59
Jack, Adam, Euan, Ryan & Bradley couldn't wait to get to the Thursday night film group to show the rough cut film and also to keep editing it!  Thanks Gavin - it was an inspirational two days - we hope to feature the film on 6th May at the film festival - will keep you up-to-date...