Reality is a many layered thing 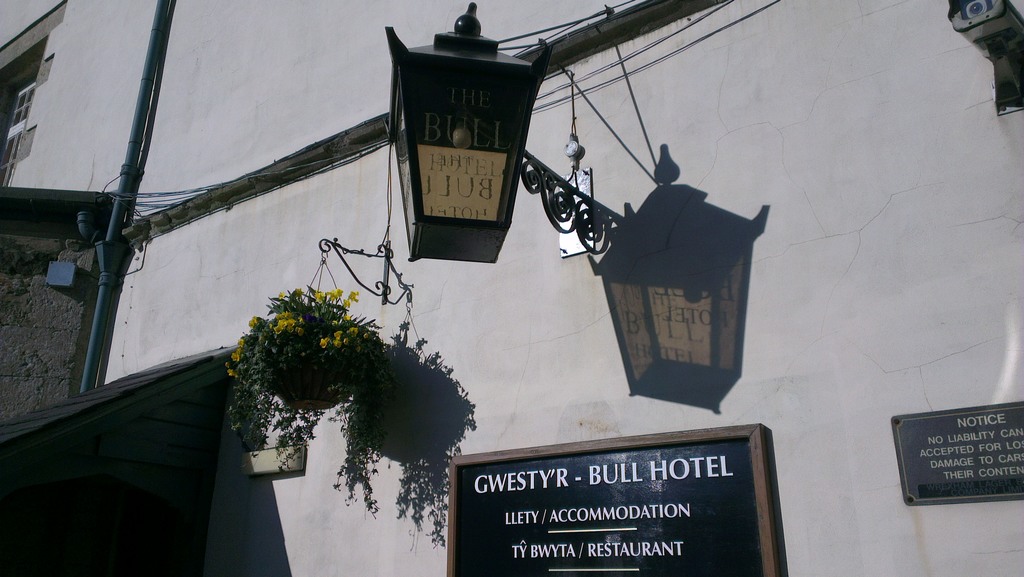 I've been thinking a lot this last week about layers as I've been trying to articulate what it is that's so magical about Hugh Hughes returning home.

So, here's Llangefni (this shot is a perfectly illustrative image, taken from the Courtyard of the Bull Hotel, Llangefni). It's a town that has been standing for hundreds of years. Let's turn the lens of time to the period between 1968 and 2013. The chances are that the town hasn't changed a great deal in that time - the town plan, though no doubt enlarged as more houses were built, and 'enhanced' by treasures like the one-way system, will have been relatively static. Some of the buildings will have changed, but many will be the same, standing proud in the face of the forty five years we're now thinking about. Landscapes, largely, remain, and people come and go - there's nothing new about that. What interests me, though, is the way that we create a town as we grow up in it, our worlds expanding from the crib and the pushchair to the garden, the school, the woods, the shops and beyond...

A few years ago, I went back to the area I grew up in - a small suburb of Sheffield, unremarkable (but gloriously hilly). I was interested in experiencing a landscape that was once so familiar. There were metal fences everywhere, preventing me from traversing my old routes to school, to my Nan's house, to the fields, but other than this minor annoyance, the place was relatively unchanged. Unchanged, that is, aside from the scale of it: it had definitely shrunk. A walk that might have seemed like an epic trek when I was small took less than ten minutes, and I'm pretty sure it wasn't just the length of my legs that brought the distance down. So I concluded that the reason the place used to be so big was because it held all my memories of growing up - it had to stretch to contain all my experiences of those streets, fields and buildings. When I left, I took the memories with me, so the town, obviously, no longer had to hold them.

I know that's a sentimental way to describe an ordinary phenomenon about spatial perception, but it is compelling. In Llangefni this year, I've been privy to the description of a town in the sixties and seventies, I've seen Hugh Hughes walking streets that I've known through the internet and imagined through stories, I've discovered a new landscape and I've helped Hugh to draw a version of the town on top of itself through the ears. Many layers, indeed, and if the chance to be part of many layers of a town - those in your mind and those created by someone else - is not a good enough reason to be in Llangefni this June, then I don't know what is.