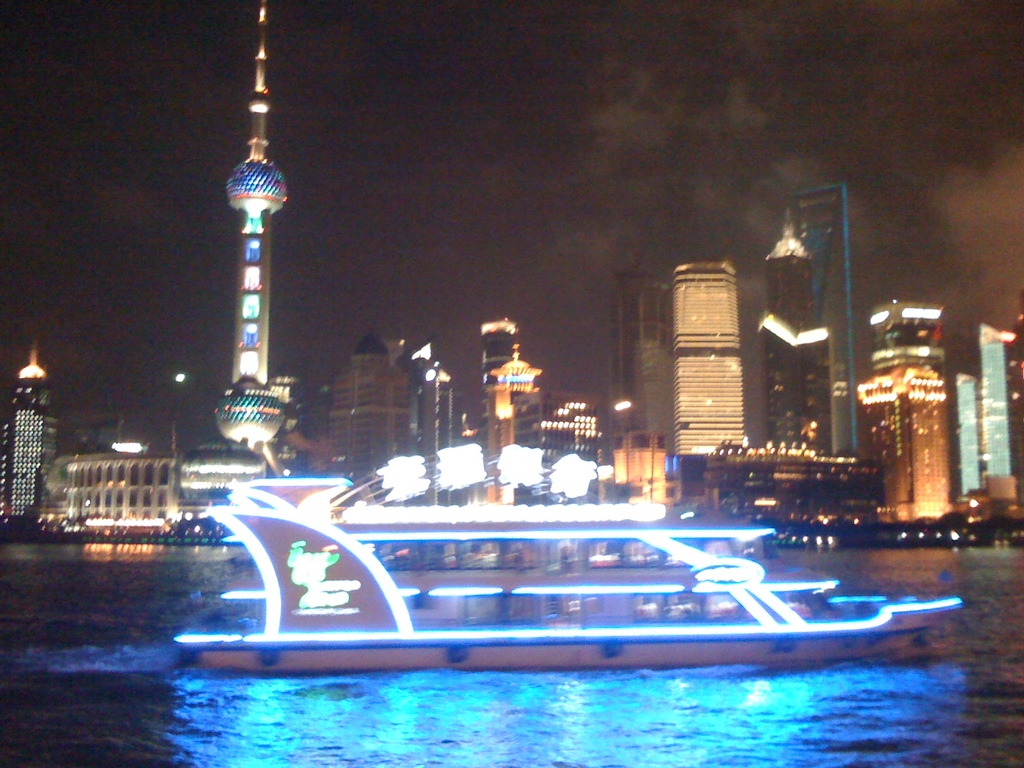 I was in Shanghai once before, in 1999. Even then you could feel the futuristic energy of the city seeping through every newly laid multi-lane highway, in the sweat of every rushing body. Now, as we all know, the future has arrived. Shanghai makes Manhattan look like a history lesson. Here space age fantasy towers wink across the water at sturdy Victorian shipping offices reminiscent of the Pier Head in Liverpool. Gucci, Costa Coffee, Hagen Daaz, and the inevitable H and M grace the streets. You can’t ignore the smell of money…

The students are fantastic. They are all graduates and older – many of them established theatre professionals who are taking this five week directing course to broaden their skills. With a lot of performers in the class, it’s relatively easy to run a directing workshop, as everyone gets to work with good actors. The ambitious plan of the Academy (think of a bigger RWCMD) is to run a five week masterclass each summer for 6 years. Each year they invite 5 directors from a particular country to run a week’s workshop each. Last year it was the US, next year it’s Russia. This is UK year. Nice to see both Wales and Scotland represented, with me and Vicky Featherstone each here for a week. We are in good company. This year also includes Jude Kelly and former RADA principal Nick Barter. The American crew included some of the directors who’ve been most influential in my life: Lee Breuer, Anne Bogart, Richard Schechner.

We work on the basic principles of directing – how to develop interesting and surprising material, how to choose what works, and how to form what works into a whole. To generate ideas and possibilities we take journeys into the city, following some unlikely rules; we dig into our own stories, and choose some tiny slices of text. We look at how to strip a scene to its key elements using storyboarding, objects and images. We explore some of the different areas of focus for the director: character relationships, visual picture, use of space, relationship to the audience, rhythm, use of objects, and key moments of transition or surprise. At the end of the week we present examples of our work, and the process of the five days, to a packed audience. The students explain the exercises they developed and how these exercises influenced the scenes they directed. We emphasise the role of surprise in everything we did during the week. A lively q and a ends the week.

In the meantime my evenings have been full of performance – Shanghai Acrobatics, contemporary dance theatre by one of the choreographers of the Olympic opening, an Beijing Opera version of Miss Julie, and the highlight for me, a traditional Ding Opera – with a stunning, effortlessly skilled actress in the lead role.

And now I have a day for sightseeing. My rather sophisticated translator Shi Hui is quite disappointed that I want to see tourist sights like the old city and the Pearl Tower, but hey, I reckon it’s okay to be a tourist for a day. Whether we’ll make it to the Expo is another question. Apparently the queues are up to four hours long. Never mind, the key thing has been to see the city itself in all its stridently consumerist, winkingly sceptical, youthfully creative, glory. As I sit in a wifi café, unable thanks to the whims of the government, to connect to youtube or certain key pages of the news sites, Janis Joplin sings over the speakers: ‘Freedom’s just another word for nothing left to lose.’ Shanghai has plenty now – to lose and to win.