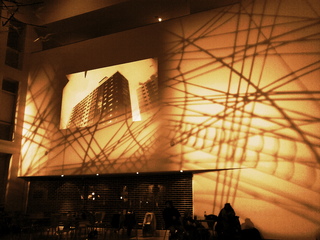 I really enjoyed taking part in the Soul Exchange recently (which also doubled as a Germs Exchange – hence this late blog post!!!) and thought you might be interested to see some of the photos I took (on my rubbishy, 2 megapixel camera – apologies – I only got it because they gave me a free Wii), as well as read my spoken word piece (yes! A poem), written specifically  for the event. It’s basically a first person piece in the voice of  a Christian grandmother, whose daughter marries a Muslim sailor, around the same time Butetown’s first ever mosque was built, in the 1930s.  She is unhappy that her grandson might be given a Muslim name – so, steals the baby away and gets him secretly Christened. It’s based on real event of the time, with real nans nicking real sprogs and getting them really named, without their parents’ prior consent. If this hadn’t happened, there’d probably be more Achmeds in that generation, than Peters and Paulines, which would make hardly any difference to us, now, but for the innocent babies, angry parents, and adamant nans, must have been a huge hoo-ha. 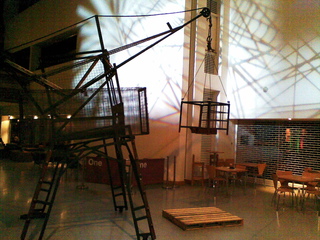 In any case, I tried to keep the piece as unjudgemental as possible, and as much from the view of the old lady as I could, rather than paint her as a busy-body or, worse, some sort of interfering old witch. It’s likely these naughty nans really thought they were in the right – if a baby wasn’t Christened, and died (more of a possibility in those days of Suchandsuch Fevers and Smallpox), the its soul wouldn’t go to heaven, they believed. Information on this (mal)practice is largely anecdotal;  the Butetown Museum can provide some documentation, however. My thanks to Soul Exchange director, Kully Thiarai, for suggesting the topic in the first place. I’m really glad my own nan only had enough power to give me a middle name (youwillneverknowwhatitis!), anyway! 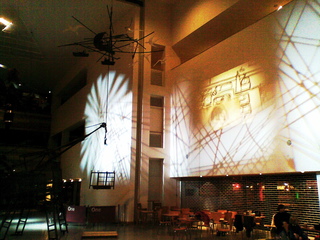 (Note: this is a performance poem, so made for hearing rather than for reading. It is to be read (imagined) in a thick Cardiff accent. Also, it begins by talking about Welsh cakes, and finding a hair in one – this is a real event, that occured in the WMC cafe, when I asked the Fates for a bit of inspiration. The result was long, dark hair embedded in the Welsh cake I had ordered. Thanks, Fates!!!)

I remember, long ago,
I found an hair in uh Welsh cake.
And I remember, even though
The hair was black as coal and as long
As from yur tuh the back of beyond and not
The sort uh thing you'd expect tuh be in
Uh cake uh that make
Like the shilling they puts in at Christmas, well -
Still, I ett it.
Said nil, because I bet it
Fell from the one who baked the cake.
I knew from who the hair escaped
Like the leaves that fall intuh Roath Park Lake
That she took us to when we were small.

It was my mother's hair, wan' it?
So I kept stumm, forgot it;
Ett and never spoke of it
'Til now.

Cos in those days if you found a thing
In food you knew exactly who
And when and where
And how it got in there
And didn't really care
For that reason.

But you never know what you'll find, these days.
Like when I go round my daughter's place...
There's other cakes made by other hands.
Her husband comes from other lands
You see.
Skin as dark as my mother's hair...
And he
Cooks, an' all! Little cakes but not cakes, really.
My mouf, it got all hot, and nearly
Burned! My stomach turned, and I have learned
Not to eat round there.

In my day, we had only three types of spices, for cakes:
Cinnamon, ginger, and cloves.
I’d never yurd uh CAR-duh-MON!
And when she said she was three munfs gone, well -
My mind was reeling.
Some things are wrong
And so is stealing –
But, I didn’t want no grandchild uh mine having no funny name,
Some strange word I could hardly say
Like car-duh-mon.
It isn’t wrong, is it?
To pop along on a visit
To the local church, taking the baby wiv me,
And at the same time incidentally
Having him Christened.
It isn’t a sin
To save a baby’s soul...

Of course, they didn’t know –
I didn’t ask!
Just took the baby and fast
As I could, got him named
As he shoulda been at the start.
Paul is what he’s called.

My daughter was appalled uh course
To have her baby named by force
By me, but see
Tuh name the baby any other way
Would uh been –
Like carduhmon in a Welsh cake,
Or an hair off an head of someone you ain’t met –
Just plain wrong.
He wouldn’t belong,
My grandson, with a name like Achmed
Or Mohammed.
Paul is what he’s called
And I’m glad, by God, that I done it. 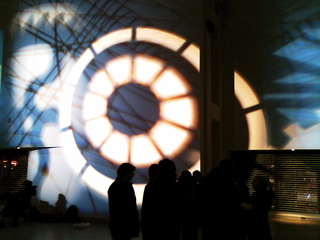 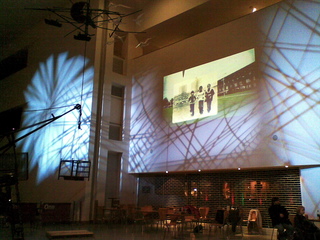 Comment by Mab Jones on February 14, 2011 at 23:51
Thanks very much, both! The photos were taken during rehearsals as I couldn't have my 1930s nan clicking away with a Nokia mobile, really... :-s And yes, the Electric Slide en-masse booty-shake was pretty tops, as well!! A really fun project :D

Comment by National Theatre Wales on February 11, 2011 at 18:48
Lovely work Mab.  Thanks for sharing your poem - I can really hear that grandmother's voice.  And your photos are pretty good too!!