After a few weeks of deep thinking, honest discussion and some often intense self reflection, the show has arrived.

My objectivity is skewed. As an artist, I entered this process with a certain amount of trepidation. I wasn't sure what this work was going to become, or what it would mean for the audiences that came to view it. Now, I have been on a journey with it; physically, mentally and personally. I have in some sense fallen in love with it. A micro community has been built around a potentially profound thing, and that feels really exciting. I still don't know what it is, what it will do, and why, but I've come to the conclusion that those aren't things I should worry about. For once in my career I am a cog in a mechanism, and not the designer and/or builder of the machine, and that's incredibly satisfying when I allow it to be. I'm just trusting it, and as a performer, I get to sit within it all, half way between the audience and the cast and that is liberating. Extracted, as a unique example, from everything else I've ever done, this work just feels incredibly honest.

Ahead of the actual opening night (TONIGHT!!!) I thought I'd share a quick free write that I did whilst sitting on the edge of stage during a tech the other day...

Confronted by a beast that is bigger and more awesome than you expected it to be.

A concept clicked into place by a team of thoughtful experts,

It's visionary, it's oculus...

First for the performers to exist, then, of course, for audiences to witness it.

In the wind, these poems hang and dangle, ready to be plucked and fully thought.

To become something, or nothing.

To land and sink in, or become lost on the aforementioned wind.

Storm.3 feels like something other than what ever I thought it would be, and I'm excited about others coming to see it. 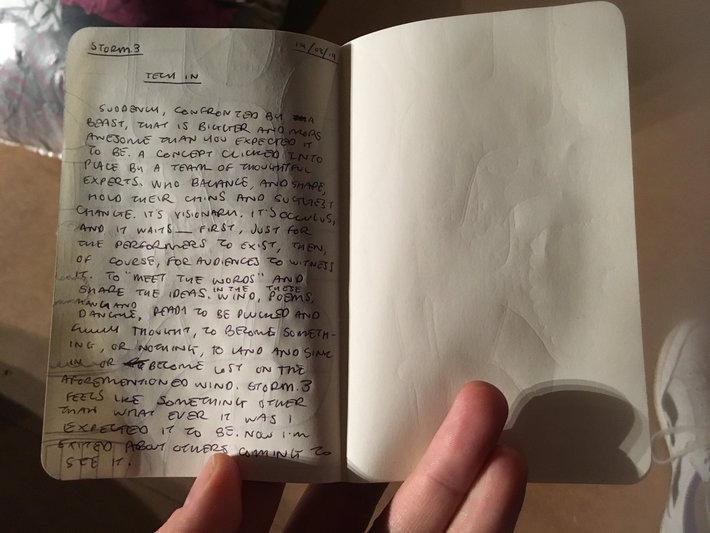 When people ask me what STORM.3 "is about", I say something like this:

"It really is about meeting some words. I think, it'll be an interesting, thoughtful, cerebral bit of theatre that just wants to bring people together in space. It's philosophical, elemental and potentially profound."

Come and have a look.

Tonight, tomorrow and the next day.