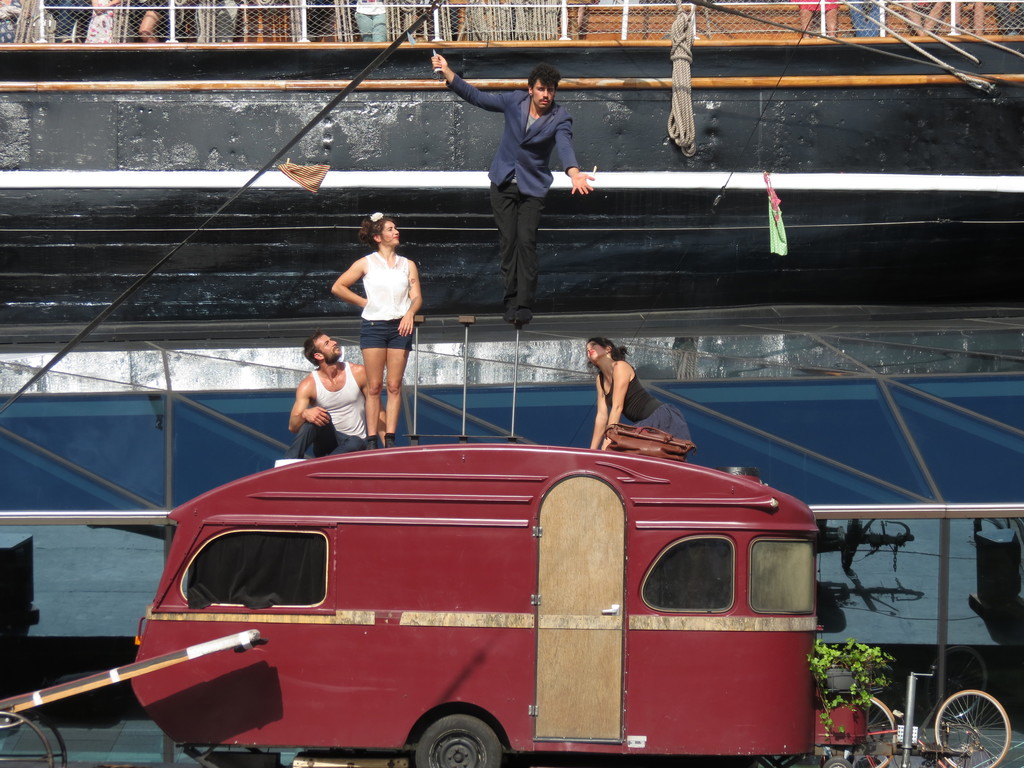 Collectif Malunes hang out in, on and above their caravan in Sens Dessus Dessous, GDIF 2015.

Last weekend the sun decided to join me in the Greenwich and Docklands International Festival (GDIF) – three days crammed full of talks, networking, circus, dance and immersive theatre events, happening around Greenwich, home of the Cutty Sark, Greenwich Market and a truly amazing gelato shop (more about gelato later, if that’s your thing).

For my part, a designer who rather likes any project that takes her outdoors, it was fantastic to meet a range of other artists equally passionate about creating work that takes place outside of a theatre space, be it street theatre, dance, art installations, music, poetry, festivals and beyond.  Kicking off our weekend was the International Marketplace, organised by Xtrax and GDIF.  In the Wales corner, individuals and companies from Pembrookshire, Machynlleth, Penarth, Cardiff and beyond showed up in full force to represent the diversity Welsh arts currently offer in this field.  Most of us were present by kind invitation of Articulture Wales, a creative organisation that brings together practitioners to support the creation of outdoor arts unique to Wales. 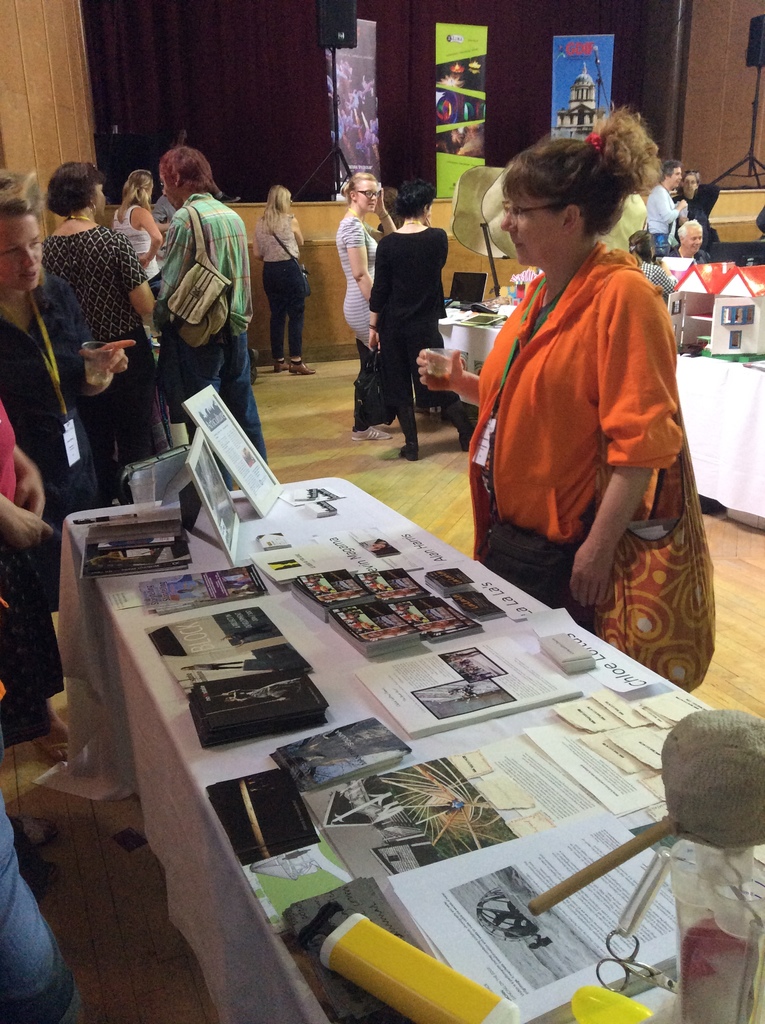 GDIF’s artistic director, Bradley Hemmings, welcomed all contributors, encouraging people to meet, talk, share ideas and make connections.  Bradley’s speech emphasised the importance of working together in times of austerity, thanking contributors for ensuring the continuation of this free festival.  And then we kicked off...three hours of meeting, chatting and sharing thoughts, ideals and creative inspiration with like-minded individuals.  It was truly fantastic to see the breadth of work that serves as outdoor theatre.  Of note was Karen Poley of Recyculture, who organises an interactive treasure hunt for participants, which has the potential to be installed in any open space.  Recyculture also weave conservation awareness into their practice; their Windwheels initiative puts disused bike wheels and recycled materials to good use in creating wind powered light installations.  Towards the end of the afternoon, I briefly caught up with Jony Easterby of Jony Easterby Productions, co-creator of For the Birds, a beautiful sound and light installation inspired by the Ynys-hir Reserve, Ceridigion.  The reserve is a rare conservation space for the observation and protection of birds.  I’m absolutely gutted I missed the production, which occurred in October last year, but images of the event can be viewed on the For The Birds website: www.forthebirds.org.uk ; - and fingers crossed for a revival sometime soon!

Welsh Artists at the International Marketplace

A Focus on Flanders

From the marketplace straight to A Focus on Flanders, an introduction to ten Flemish companies who specialise in outdoor performance, supported by Flanders House London and the Flanders Arts Institute.  Each presentation was refreshing and unique, and showcased a variety of innovative companies.  Some were performing over the weekend, more about them later.  Of the rest, I was particularly bowled over by Berlin, whose starting point for each performance is a city or region somewhere in the world.  Of particular intrigue is their latest production, Land’s End, part performance, part murder-mystery, with fragments of the story pieced together by the audience at both the crime scene and the interview room.  I have great admiration for Comp.Marius, a company specialising in the performance of plays outdoors and in any location – river banks, parks, discarded hangars.  Their versatility in playing location is largely due to a specially designed seating bank, which can be transported and erected in any location – rectifying that reoccurring problem of ensuring every audience member at an outdoor performance has a reasonable view.  And for their brilliant storytelling and fantastic imagery, Studio Orka also caught my eye – a collective of designers and actors from Ghent who travel to dream worlds and ‘the twilight zone between imagination and reality’ in their site-specific productions.  Any company who shows me an image of a giant...plagued by dwarfism...carrying all his possessions, including the kitchen sink...in a knapsack, is on to a winner.

A quick pause and an evening picnic with fellow Welsh artists, then on to an evening drinks reception and the official opening of the festival.  Over the rest of the weekend I was treated to some spectacular productions that made the most of their Greenwich surroundings in very different ways.  There was plenty to cater for all tastes and all ages, and excellent planning gave the chance to see every show programmed over the weekend...I didn’t quite manage that; I took a much-needed bit of time out on Saturday afternoon with a cuppa to process everything I’d experienced, but there were some definite personal highlights to what I did see, and these included:

Kori Kori by La Compagnie Oposito – a promenade dance piece featuring  18 dancers and 3 live musicians leading a crowd through Greenwich.  Each dancer has equal footing in the ensemble, yet each retains a unique diversity to their neighbour, through ethnicity, hairstyle or their individual flair regarding the group costume.  Kori Kori succeeds in celebrating both that which makes us different and that which unites us simultaneously.  Each performer carried their own chair, which acted as set piece, platform, sound effects and weapon as the piece commanded, and the stark contrast between the opulent surrounding of Greenwich University and the carnival of colour and revolution the performers brought with them created a stunning opening to the festival.  Special mention goes to the drummer’s ingenious method of mobilising his drum kit.

Dynamite and Poetry by 15Feet6 – what can I say?  Just brilliant!  4 highly skilled circus performers add a touch of plot to enhance their excellent routines on the teeterboard, Chinese pole and Russian barre...with a few explosions thrown in for good measure.  I’ve not laughed that much at a performance in a while; a well-measured proportion of clowning and camaraderie created a heart-warming piece.   Though to my friend Jenny McCarthy – be warned, you might find it somewhat traumatising. 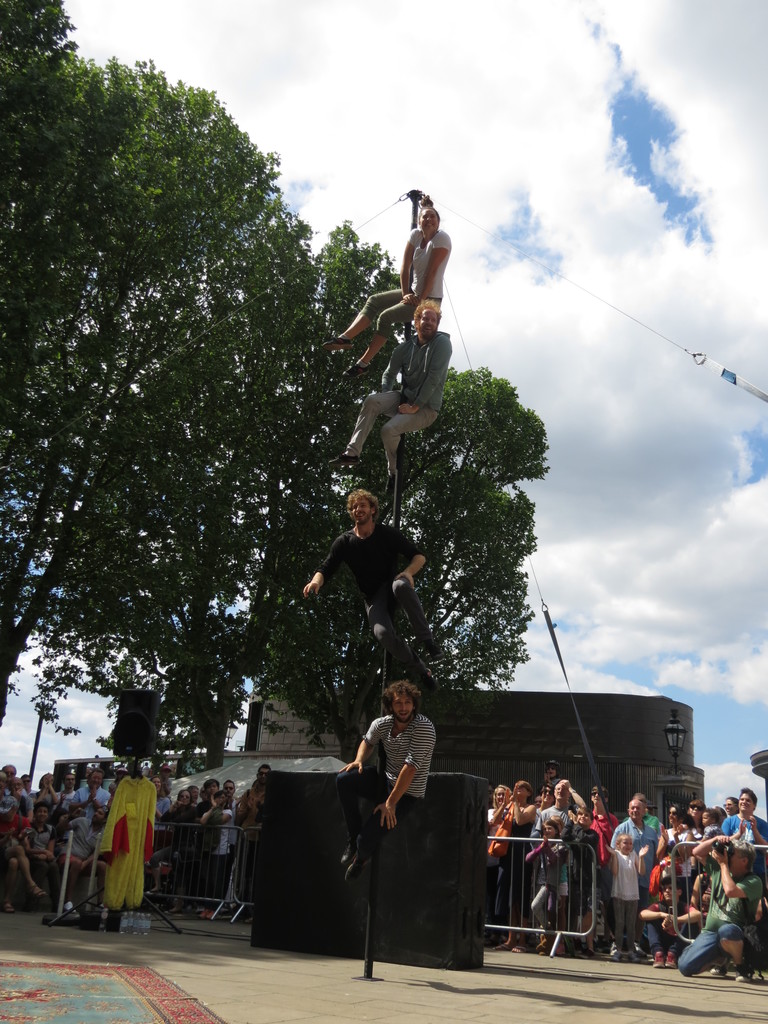 The Incredible 15Feet6...trying to spot their mum in the crowd perhaps?

Walk Walk by Bronks – A lovely piece aimed at children, which integrates performance with the natural surroundings.  We are led by Rebecca, a slightly flustered walk-guide from the Genuine Rural Guild of Genuine Walk-Guides.  This show had a charming way of using the space and what’s in it as both story inspiration and set, and encouraging enthusiasm for theatre amongst children without keeping them indoors.  It was also one of the shows that seemed prepared for and able to make use of the rain that imminently joined us for a portion of the weekend. 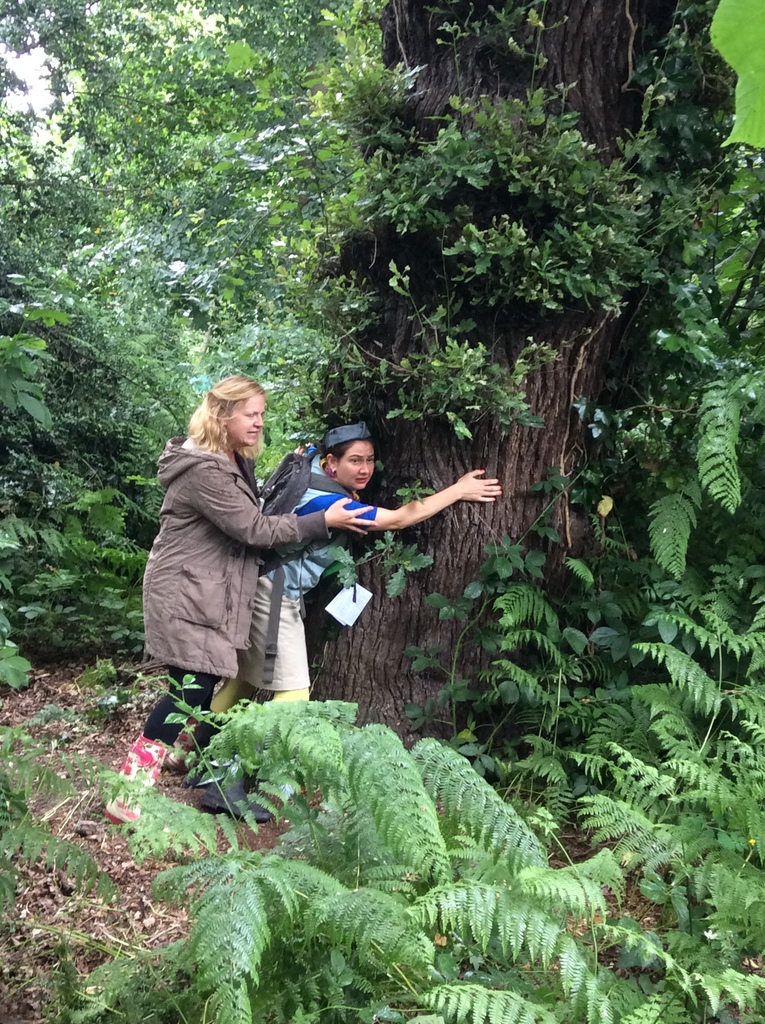 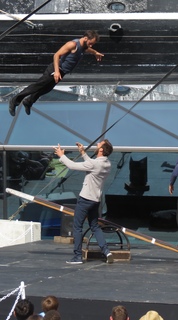 Sens Dessus Dessous by Collectif Malunés – More circus acrobatics, including trapeze, circus wheel and unicycle amongst others, plus a rustic red caravan as both onstage and offstage areas (and not a surface of that caravan was left unused).  A fun and energetic performance with a stunning backdrop of the Cutty Sark to play against.

To return briefly to the gelato...

While I’m in Greenwich mode...Black Vanilla, the gelato shop was truly awesome.  Kiwi and Banana flavour?  Sounds strange, actually delicious...as was the Pink Grapefruit, and amongst others to try included Salted Caramel, Mango and Sour Cherry Ripple.  So, great company, outdoor festival and gelato...what was there not to love?!  (And I haven’t even started on the pubs of Greenwich...but that’s another blog post for sure).

So what did I take away from the weekend?  Other than some fab photos and new friends, my abiding memory was from Friday night; the Kori Kori troupe on the run, inviting us to follow, and as I hurried after them I turned to observe a massive crowd behind me all caught up in the story too.  It must have been at least 1,000 strong.  I hear a lot of worrying rumours – amongst education fields and reflected in recent budget cuts – whispers of how the arts are superfluous, and I sometimes worry that theatre in particular is often in danger of seeming inaccessible.  What Greenwich Fair offered was free entertainment for people of all ages; performances you can sidle up to, arrive a bit late for, leave if you feel a bit uncomfortable or have a train to catch, no questions asked – but you are equally welcome to grab a patch of turf and be one of the crowd.  No seat costs more than another; outdoor theatre returns performance to the streets, where we can all own a piece of it, glad we witnessed the moment a man dressed as a squirrel drops a nut from a tree, the cyclist successfully smashes an apple with a sledgehammer in the middle of a wheelie, or we learn the fate of the panda and his red-bearded friend (sorry Jenny). 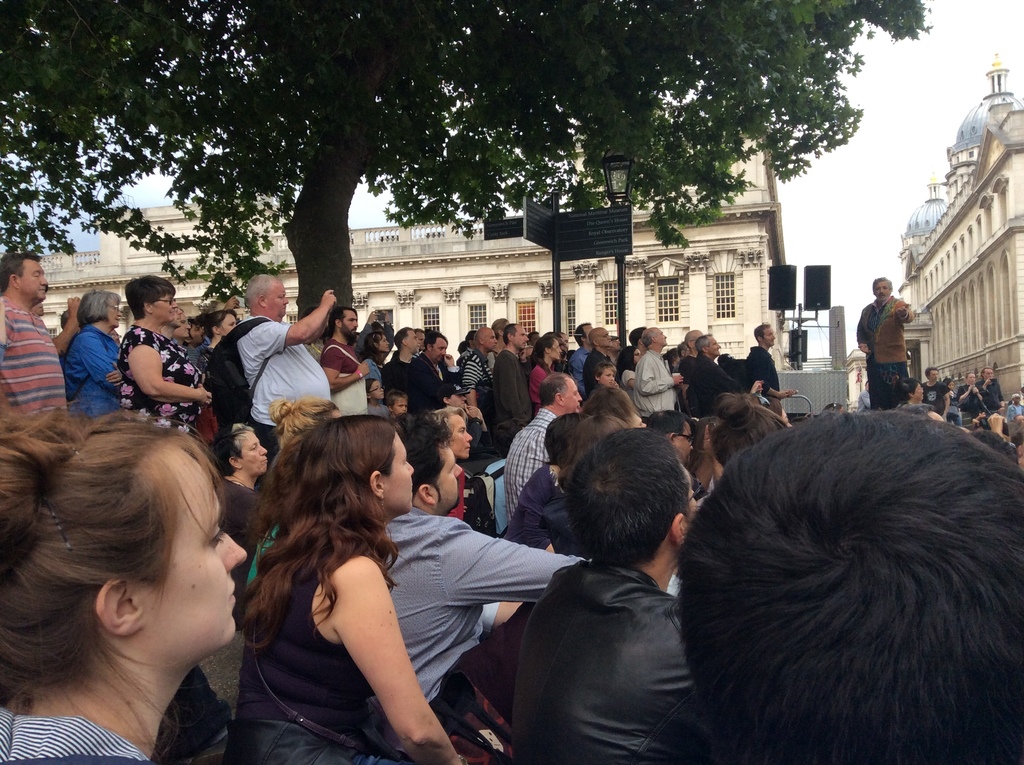 Many thanks to Articulture, whose bursary scheme provided me the chance to explore GDIF.  Anyone who finds themselves in East London this weekend, the festival continues with Dancing City, a programme of events across Canary Wharf and Tower Hamlets, and The Four Fridas, a large scale theatre event based on Frida Kahlo, at the Royal Artillery Barracks, Woolwich.  Festival info can be found via their website: www.festival.org